Please ensure Javascript is enabled for purposes of website accessibility
Log In Help Join The Motley Fool
Free Article Join Over 1 Million Premium Members And Get More In-Depth Stock Guidance and Research
By Rich Smith - May 1, 2018 at 6:05AM

Pension costs torpedo first-quarter results -- and the news could be even worse next quarter.

True, the company reported a GAAP loss in the fourth quarter last year, but that was primarily because Uncle Sam pulled a fast one on Lockheed, passing tax reform and forcing Lockheed to take a $1.9 billion one-time non-cash charge to earnings as a result. Charge or no charge, though, Lockheed ended last year with cash profits of $5.3 billion -- $6.5 billion in cash from operations, minus $1.2 billion in capital spending -- its best-ever result according to data from S&P Global Market Intelligence.

Sadly for its investors, it doesn't look likely that Lockheed will be able to repeat this result in 2018. 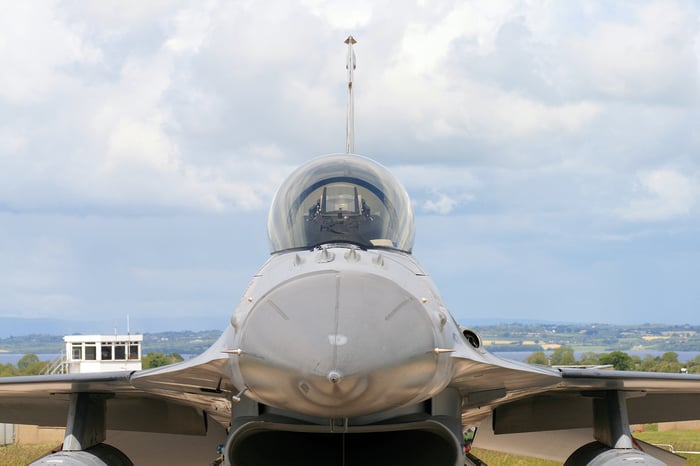 A swing and a hit...and also a miss

Mind you, on the surface, Lockheed Martin's GAAP profit in Q1 2018 looked just as dramatic as Q4 2017's GAAP number looked dismal. Quarterly profits surged 49% year over year to $4.02 per share -- no easy trick for a company as big as Lockheed. Sales for the quarter were $11.6 billion, up only 4% year over year, but still ahead of what Wall Street had been expecting.

The problem was, Lockheed's cash profits didn't come close to tracking that result.

It gets worse. Calculating actual free cash flow at Lockheed requires deducting not just pension contributions from cash flow, but capital expenditures as well. Lockheed spent $216 million on capital investment in the quarter though. As a result, its free cash flow for the first quarter (its "cash profits," which ideally should track GAAP accounting profits pretty closely) was only $416 million -- only one-third of the reported GAAP profit of $1.2 billion.

Of course, this is only one quarter's earnings. Will things get better as the year improves?

Balancing those brighter expectations, though, Lockheed made no improvement at all to its cash flow expectations, which sit steady at about $3 billion for the year. (Minus capital expenditures similar to the $1.2 billion Lockheed spent last year, this suggests full-year free cash flow of perhaps $1.8 billion -- or roughly one-third the cash profit that Lockheed Martin generated in its high water mark year of 2017.)

And things could look even worse in the near term. On a conference call with analysts after earnings were released, CFO Bruce Tanner warned that the pension contributions that weighed down cash production in the first quarter could actually push Lockheed's cash flow (and free cash flow as well) into negative territory in the second quarter, while in the third quarter the company is planning to make $3.5 billion in pension contributions. With back-to-back (to back) weak cash quarters to start off the year, it's little wonder expectations for the full year aren't very bright. True, this should all settle down by 2020, at which point Lockheed says its pension programs will be in "full freeze." But in the meantime, 2018 is looking kind of rough.

And with Lockheed Martin stock still looking very expensive after Q4 2017's charge -- 23 times free cash flow, and 40 times earnings, no less -- it's little wonder investors decided to sell off the stock after earnings were announced.