What goes up...is coming back down. After soaring 33% after earnings yesterday, Intelsat (OTC:INTE.Q) stock is giving back some of its gains today, with shares down 9.4% as of 11: 15 a.m. EDT. If you're an Intelsat investor, you may be tempted to ask why that is happening. The better question: 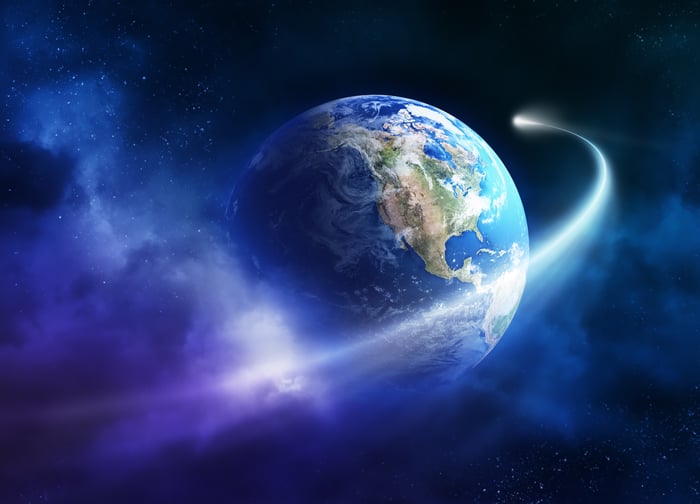 Intelsat stock may be starting to circle back to where it was before earnings. Image source: Getty Images.

After all, Intelsat's news yesterday wasn't really all that great. Although Intelsat did beat on sales, it did so primarily as the result of a change in how it accounts for revenue. And as for profits, Wall Street had expected it to lose $0.41 per share. Instead, Intelsat instead reported losses of $0.56 in Q1.

Neither of those developments really seemed to justify investors' decision yesterday that Intelsat was suddenly worth one-third more on Tuesday than it had been worth on Monday.

Nor did Intelsat's prospects going forward change very much. Intelsat reaffirmed previous guidance, saying investors can expect it to produce between $2.06 billion and $2.11 billion in sales for full-year fiscal 2018, in line with Wall Street's predicted $2.08 billion. Intelsat also reaffirmed its capital spending plans for the next three years:

In both cases, this was precisely what Intelsat had told us to expect two months ago. Given that nothing else has changed very much, it makes sense that Intelsat's stock, too, would begin gradually drifting back to where it was before earnings were released -- and maybe even a bit lower.