Please ensure Javascript is enabled for purposes of website accessibility
Log In Help Join The Motley Fool
Free Article Join Over 1 Million Premium Members And Get More In-Depth Stock Guidance and Research
By Rich Smith – Apr 25, 2020 at 7:13AM

Four years in the making and six months in orbit, Northrop Grumman's (NOC 0.16%) MEV-1 satellite has just notched its first success: Intelsat's (INTE.Q) IS-901 telecommunications satellite is back in service.

And just like that, a new industry is born. 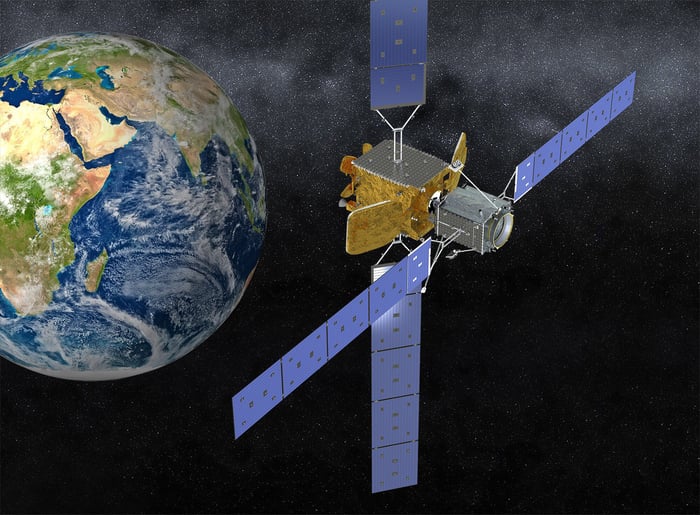 Present at the beginning

We first told you about the Mission Extension Vehicle spacecraft in 2016. A self-powered space tug, MEV-1 was designed by Northrop's "Innovation Systems" division (back when it was called "Orbital ATK") to serve as a sort of space tow truck that could rescue defunct satellites, tow them out of orbit for repair or refueling, and then return them to orbit to continue functioning as designed.

Last October, sitting atop a Russian Proton rocket at the Baikonur Cosmodrome in Kazakhstan, MEV-1 blasted off on its first mission: to rescue an out-of-fuel 19-year-old Intelsat telecommunications satellite dubbed IS-901.

It took MEV-1 four months to reach and dock with IS-901 (in February 2020). Since then, it has been steadily tugging IS-901 into a new geostationary orbit, which it reached late last week. Now, for the next five years, MEV-1 will remain attached to IS-901, serving as both the Intelsat satellite's engine (and gas tank) and its guidance system, helping it to maintain proper orbit and allowing it to function as a comsat servicing "roughly 30" of Intelsat's government and commercial customers.

At the end of the five years, MEV-1 will tug IS-901 into a decaying orbit, where both satellites will descend to Earth and burn up in the atmosphere, preventing either one from adding to the growing cloud of space debris surrounding Earth.

What it means for Intelsat

This is super news for Intelsat. For the low, low cost of just $13 million a year (its fee paid to Northrop), Intelsat should get five more years of service life out of IS-901, a satellite that originally cost probably $300 million to build and was expected to remain in service for 13 years (so about $23 million per year).

It also means that Intelsat will be able to collect revenue from customers utilizing the comsat for five more years. How much, exactly, is unknown -- but anything Intelsat gets is a whole lot more than the $0 a year IS-901 was generating up until Northrop salvaged it.

What it means for Northrop Grumman

But this is an even bigger deal for Northrop Grumman. In one fell swoop, it (a) earned itself about $65 million in recurring revenue over five years, (b) proved that in-orbit satellite repair and servicing is a viable business that can generate more revenue for it with subsequent "MEV" launches, and (c) completed its satellite repair and refurbishment mission before any of the other rivals looking to open this market could accomplish theirs -- making Northrop Grumman the de facto leader in this industry.

Which "other rivals" are there that might challenge Northrop's supremacy?

The list is actually quite short. We know that Lockheed Martin (LMT -0.72%) floated a plan to build a "Jupiter" class space tug as part of its bid for a NASA Commercial Resupply Services contract back in 2015 -- and have NASA pay for the experiment. However, NASA nixed that deal.

Smaller space rival Maxar Technologies (MAXR -1.59%) poses (or perhaps posed) a bigger threat to Northrop's space tug ambitions. In rapid succession, Maxar won contracts from both NASA and the Defense Advanced Research Projects Agency (DARPA) a few years ago to play doctor to their geostationary satellites. For a while there it looked like Maxar was the odds-on favorite to dominate this nascent industry of in-orbit satellite repair and servicing. But Maxar has already abandoned plans to perform this service for DARPA, and we've seen little in the way of progress on its NASA contract either.

Meanwhile, Northrop has gone ahead and done exactly what it promised to do, has a satisfied customer to show for it -- and is already planning its second mission for Intelsat.

MEV-2 is scheduled to lift off later this year. Its target: Servicing Intelsat satellite "IS-1002."