The numbers tell the tale.

By now you've probably heard the news: Canada's MacDonald, Dettwiler and Associates (MAXR -2.39%) is buying DigitalGlobe (DGI), one of America's leading providers of space-based Earth photography. Soon, Canada will own the technology used for everything from monitoring global weather patterns to updating the maps on your smartphone to checking in on what the North Korean nuclear missile program is up to lately.

What you may not have heard is that MDA could soon be coming to U.S. stock markets. 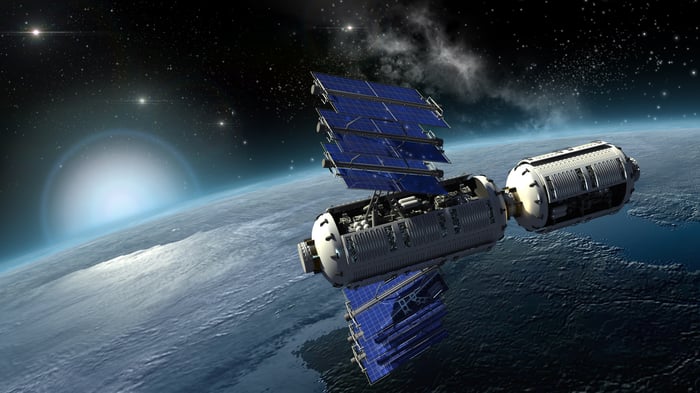 Just who is MDA, anyway? It's actually a pretty big name in space, having bought out Space Systems/Loral (SSL), once the manufacturing arm of American satellite operator Loral Space and Communications, in 2012 for $875 million.

Still, few U.S. investors -- even those who pay close attention to the new space race -- are familiar with the company. But now, the $2.4 billion purchase of DigitalGlobe promises to make Canada's MDA one of the leading names in global satellite technology. As the company announced last month, it intends to list its stock on the New York Stock Exchange after completing its acquisition of DigitalGlobe.

Of course, in Canada, MDA is already a listed, publicly traded corporation (on the Toronto Stock Exchange). Here in the U.S., it also happens to be one of the American government's favorite space contractors, having won back-to-back contracts (through SSL), first from NASA and then from DARPA, to develop a concept for orbital "space tugs." These vessels, essentially small unmanned spaceships, will one day orbit Earth capturing, repairing, refueling, and even towing into new orbits troublesome satellites that have for one reason or another ceased to function.

NASA (and DARPA, and a whole host of private companies such as Intelsat (INTE.Q)) have expressed interest in such a "space tow-truck service" that could salvage their multimillion-dollar investments and transform them from orbital space junk into operational space assets once again. In fact, last year, Intelsat signed a contract to have Orbital ATK begin providing repair services with a space tug Orbital is developing.

But now, MDA is going to give Orbital ATK a race for that money.

Why would you want to buy MDA?

And here's another bit of trivia for you: You may not have heard of MDA before. But American space powerhouse Orbital ATK (OA) certainly has. In 2008, Orbital ATK attempted to buy MDA (but its attempt was stymied by a decision of the Canadian government, which forbade the sale). That fact alone should probably pique your interest. If a company of Orbital ATK's quality thought MDA was worth a look, maybe you should be looking at this stock as well.

So let's do that. Mining data from S&P Global Market Intelligence, here's what I've found out about MacDonald, Dettwiler & Associates:

First and foremost, it's a sizable company. MDA boasts a $1.8 billion market capitalization on the Toronto exchange. MDA is also profitable -- albeit perhaps not quite as profitable as meets the eye.

With its relatively weak free cash flow, you might expect MDA to have a heaping helping of debt on its books -- and you'd be right. Net debt on the balance sheet looks to be a smidge below $720 million. Combined with the company's market cap, this gives MDA stock an enterprise value of $2.5 billion.

So is this a company you should want to invest in when it appears on the NYSE, or not? Valued on earnings, the stock looks modestly priced at less than 17 times earnings. Valued on free cash flow, though, MDA sells for an enterprise value closer to 28 times free cash flow. To me, these seem rich valuations for a stock that, according to analysts polled by S&P Global, is expected to grow its profits at only about 1% annually over the next five years.

So what's my advice?

If and when MDA decides to list its stock on the NYSE, let it sit there. Whether hosted in Canada or down here in the U.S., this stock simply costs too much right now.