Please ensure Javascript is enabled for purposes of website accessibility
Log In Help Join The Motley Fool
Free Article Join Over 1 Million Premium Members And Get More In-Depth Stock Guidance and Research
By Rich Smith - Feb 25, 2017 at 9:13AM

Satellite imaging start-up Planet Labs is growing by leaps and bounds as it covers the Earth in tiny spy satellites.

There's a battle going on in outer space, for control of the Earth imaging market.

Yesterday morning, we learned that DigitalGlobe (DGI) has sold itself to Canadian space-tech specialist MacDonald, Dettwiler and Associates for a purchase price of $2.4 billion -- and not a moment too soon. DigitalGlobe, if you recall, is the American satellite-imaging company that itself bought one-time Motley Fool recommendation GeoEye a few years ago.

Just before announcing its own sale, DigitalGlobe reported a loss for its fiscal fourth quarter. And if you ask me, this suggests the time is ripe for DigitalGlobe to cash out -- the more so because its primary area of business is about to get even tougher to compete in. 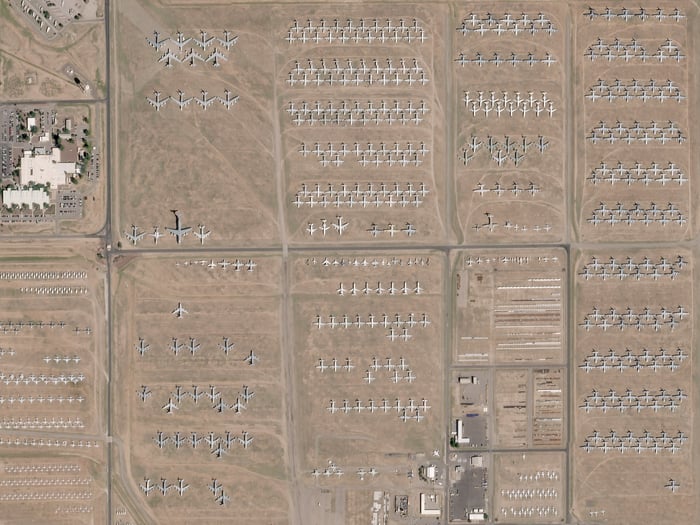 DigitalGlobe is one of the biggest names in satellite-based, highly detailed Earth imaging. The company operates a constellation of five satellites capable of snapping photographs from orbit at resolutions as minute as 30 centimeters per pixel. DigitalGlobe calls its constellation "the best in the world" and "the largest constellation in the industry," and that's at least half right.

Problem is, it's also half wrong. DigitalGlobe may dominate the market for highly detailed Earth imaging. But over at upstart Planet Labs (also known simply as "Planet"), one of the leaders of the "new space" industry is rapidly overtaking DigitalGlobe in breadth of coverage.

As we discussed last month, Planet had for some time been discussing acquiring Alphabet's (GOOG -0.27%) (GOOGL -0.21%) satellite imaging business, Terra Bella. The purchase price remains a mystery -- but the deal itself is apparently now a "go." On Feb. 3, Planet confirmed that it will indeed acquire Terra Bella from Alphabet, along with its fleet of seven high-resolution (capable of sub-meter resolutions) satellites.

Then, last week, Planet announced the launch of 88 new "Dove" medium-resolution (three to five meters per pixel) satellites, more than doubling the size of its medium-res constellation to 144 birds in orbit.

Planet made history here in a couple of ways. First, its deployment was part of an Indian government PSLV (Polar Satellite Launch Vehicle) launch that sent 16 other satellites, in addition to Planet's, into space. At 104 satellites total, the mission that carried Planet's Doves was the largest-ever satellite deployment made from a single rocket.

This is significant not only because it gives Planet bragging rights. By more than doubling its satellite constellation, Planet says it now has the ability to "image all of Earth's landmass every day." Alone among satellite operators, Planet can now take a snapshot of every square foot of Earth's solid surface once per day, every day of the year.

With every passing day, Planet Labs is getting bigger, treading more and more on DigitalGlobe's astro-turf, and making its rival's products nonunique. Indeed, even if the photos taken by Planet's Doves don't offer quite the same resolution as DigitalGlobe offers, Planet's ability to take so many snapshots every day gives the company a more all-encompassing view of what's happening around the globe.

It's difficult to guess what advances will flow from access to such data. Better weather forecasting, certainly. A clearer view of the progression of global warming, its effects and its causes, very likely. But we can also anticipate Planet generating better data on traffic patterns on highways, at ports, and along shipping routes; on the spread of residential development that could guide brick-and-mortar retailers on where to place their next big-box stores; and in countless other ways.

The future is looking awfully bright for Planet Labs. And it's getting brighter every day, one Dove at a time. Look! Up in the sky! This time it really is a bird -- in fact, a whole lot of Planet Labs' Flock 3p Doves. Image source: Planet Labs.