And one of the space companies leading this race hails from Canada.

The Defense Advanced Research Projects Agency (DARPA) serves as the "mad scientist" wing of the U.S. Pentagon, responsible for building such things as anthropomorphic robots and super-secret spy planes. Perhaps it shouldn't come as a huge surprise that now, DARPA wants to put robots in space.

The bigger surprise is that these will be peaceful robots, quietly tinkering on glitchy spacecraft and helping to extend the lifespan of satellites in orbit. 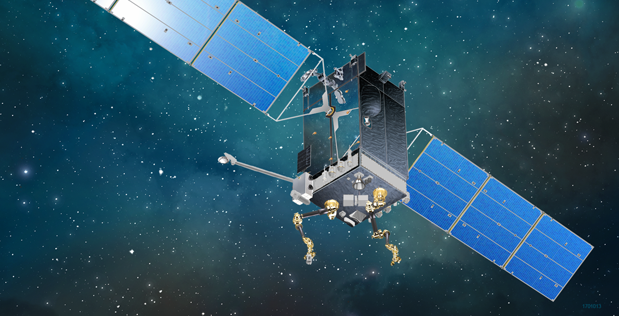 It came from outer space -- and it had hands! (Artist's concept of what DARPA's RSV will look like.) Image source: DARPA.

Department of Defense will open a space tow-truck service

Last month, DARPA announced it has teamed up with Space Systems Loral (SSL) "to develop technologies that would enable cooperative inspection and servicing of satellites in geosynchronous orbit (GEO), more than 20,000 miles above the Earth, and demonstrate those technologies on orbit." DARPA calls this its Robotic Servicing of Geosynchronous Satellites (RSGS) project, and its missions in orbit will include:

DARPA believes that if successful, RSGS could "radically [lower] the risks and costs of operating" both military and commercial satellites in GEO.

What will SSL do?

DARPA will provide a "robotic module" including specialized arms for repairing satellites, a toolkit, and software to operate all of the above. SSL's role in RSGS will be to supply a spacecraft and integrate DARPA's module into it, thus forming one complete "robotic servicing vehicle," or RSV. SSL will then demo the RSV in orbit, after which it will offer to service defunct military and commercial satellites on a paid basis. Best of all, SSL gets to retain ownership of the RSV once the demo is done.

As for what DARPA gets out of all this, SSL has agreed to offer discounted prices for servicing military satellites "throughout the operational life of the RSV." Additionally, DARPA will license its module technology to other private space corporations, receiving license fees for their use.

I don't blame you. All of the above does sound a lot like NASA's Restore-L program to service satellites, doesn't it? I mean, even to the extent of DARPA making SSL its favored contractor, just as NASA did.

Well, DARPA addresses this confusion, too, explaining that the key differences between its RSGS program and NASA's Restore-L are:

All that said, DARPA "has conducted extensive dialogues" with NASA regarding Restore-L, and will be exchanging information with its counterparts to accelerate development of both programs.

Strange as it may seem, Canada-owned SSL is fast becoming a favorite of America's government aerospace and defense agencies. That's not great news for U.S. investors who might want to invest in SSL's parent company, whose stock for the time being is listed only in Toronto. It could also be bad news for local American aerospace companies like Boeing (BA -0.18%), Lockheed Martin (LMT -0.43%), and Orbital ATK (OA).

Boeing and Lockheed, as you may know, work together under the umbrella of the United Launch Alliance to perform services in space. As we reported last year, they are teaming up to build a space tow-truck service. At some time in the next few years, Boeing and Lockheed Martin plan to convert spent second-stage launch rockets into chassis for "space trucks" that can shuttle supplies around in orbit, refuel, and even make repairs on satellites.

Orbital ATK has a similar plan, but it will use a custom-made Mission Extension Vehicle, or MEV, to refuel, tow around, and perform repairs on orbiting satellites. What's more, Orbital ATK may be first in this race, as it plans to put its first MEV in orbit as early as next year.

But now SSL is joining in the fun. With backing from both NASA and DARPA as well, it's clear which horse the U.S. government is backing, even if it appears SSL will be last out of the gate. If ULA and Orbital ATK want to secure their place in this race, they need to get their respective space tow truck services in orbit -- and pronto.