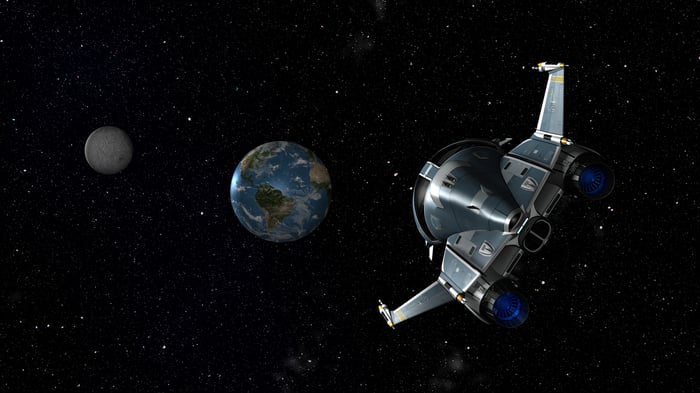 One day soon, United Launch Alliance could be operating a fleet of "trucks" in Earth orbit. Image source: Getty Images.

The news is out, and the internet tubes are practically vibrating with excitement: Lockheed Martin (NYSE:LMT) and Boeing (NYSE:BA) are building a space truck.

We actually first told you about this nearly half a year ago. But lately, a lot of other media outlets have discovered the story and begun writing about United Launch Alliance's (ULA, which is Boeing and Lockheed's joint space venture) plan to convert second-stage launch rockets into reusable space vehicles -- "space trucks" that can tool around the solar system under their own power.

Naturally, in the perpetual motion machine that is the internet, this revived attention got our attention and inspired us to do a bit more digging into exactly how this will all work.

How this will work

The first step to understanding how ULA's plan will work is to understand how it won't work. Currently, there are two major paths to get to space: launching with a "disposable" rocket (such as Boeing and Lockheed, Orbital ATK (NYSE:OA), and Airbus' (OTC:EADSY) Arianespace all use); or launching with a "reusable" rocket, a la SpaceX. The disposable path requires the construction of a brand-new rocket for each launch, which is discarded to burn up in the atmosphere after launch. It's worked well so far for ULA, which earned $400 million in operating profit last year. The reusable path hopes to produce even more profits -- by shedding costs and recovering launched rockets for later reuse.

Second verse, similar to the first

Instead, ULA's "space truck" plan focuses on a means of reusing a rocket's second stage -- in space. (ULA also hopes to recover its first-stage rockets through a different process. I'll talk more about that in a later article.)

Featuring a lightweight electrical system, insulated body, and four thrusters for maneuverability, an ACES space truck will function first as an ordinary second-stage rocket, lifting a payload into orbit. Once there, though, ACES will remain in orbit and assume its new role as an off-planet space truck -- accepting replenishment with additional fuel, and perhaps itself refueling other satellites in orbit, "towing" off-course satellites back into their proper orbits, or even shuttling cargo back and forth to the moon. (And if you're thinking at this point that ULA's space truck idea sounds a lot like Orbital ATK's Mission Extension Vehicle (MEV), which is scheduled to begin operations in late 2018, I had that same thought, too.)

Like Orbital's MEV, ULA notes that ACES will have the ability to turn off and turn on its engines an "almost unlimited" number of times, allowing it to operate in orbit for "weeks." Indeed, ULA CEO Tony Bruno says that once in orbit, ACES could conceivably continue to operate in space "forever." And with its new capabilities, ACES can earn Boeing and Lockheed additional revenue from the rocket -- which otherwise would have been discarded as a mere used-up second stage.

Of course, in order for ACES to perform any of these missions -- particularly the turning on and turning off parts -- it will need fuel. But since ACES' fuel is currently located on Earth and needs to be brought up by rocket, doesn't that make orbiting "space trucks" superfluous? Where's the advantage in sending up one ACES rocket, loaded with fuel, only to transfer that fuel to an identical ACES in orbit?

Curious to find the answer, I reached out to ULA for an explanation. What they told me was that an ACES designed to operate as a "space truck" would be specially fitted out with an "extended duration kit." Ordinary ACES would launch without such a supplement.

And as for the economics of bringing up additional fuel, ULA clarified that this would not necessarily be brought up especially to fuel space trucks (at a current cost of $164 million per refueling mission, plus the cost of the fuel). Rather, a launch designed primarily to put one payload in space (a satellite, for example), if it had excess capacity, might fill out that capacity with extra fuel, sent up at "near zero" marginal cost -- then transferred to a waiting space truck.

That's the near-term plan. Further out, in the days when ULA envisions "1,000" humans living and working in space 30 years from now, ULA hopes to find more fuel that doesn't need to be lifted off Earth first to be used. Water ice extracted from the moon or asteroids, for example, could be broken down into hydrogen and oxygen and used to refuel ACES space trucks.

It's discovering that fuel, and perfecting the space trucks to transport it and burn it, that will really enable the space economy to take off.