Please ensure Javascript is enabled for purposes of website accessibility
Log In Help Join The Motley Fool
Free Article Join Over 1 Million Premium Members And Get More In-Depth Stock Guidance and Research
By Dan Caplinger - May 2, 2018 at 4:34PM

Get the scoop on the latest from earnings season.

Wall Street had another day of turbulence on Wednesday, with a brief move higher in the early afternoon giving way to losses for most major benchmarks by the end of the session. Market participants had to deal with a lot of different news items during the day, including the decision by the Federal Reserve to leave interest rates unchanged but warn about future inflationary pressures ahead. Earnings season also continued to have an impact on dozens of companies releasing their latest results, and bad news sent certain individual stocks sharply lower. Molson Coors (TAP -0.44%), Gilead Sciences (GILD 5.16%), and Yum China Holdings (YUMC 0.17%) were among the worst performers on the day. Here's why they did so poorly.

Shares of Molson Coors dropped more than 15% in the wake of the company's release of first-quarter financial results. The maker of Miller Lite and Blue Moon as well as its namesake beer brands blamed cold weather and weak ordering from wholesale distributors for poor performance, which included a 5% drop in revenue and a nearly 40% reduction in adjusted net income compared to the first quarter of 2017. Molson said that some of the weakness will reverse itself later in the year as wholesale inventory levels return to more normal levels. Yet poor demand in both the U.S. and Canada was bad news for Molson Coors, and investors have to hope that the brewer will bounce back from what is historically a seasonal low point for the year. 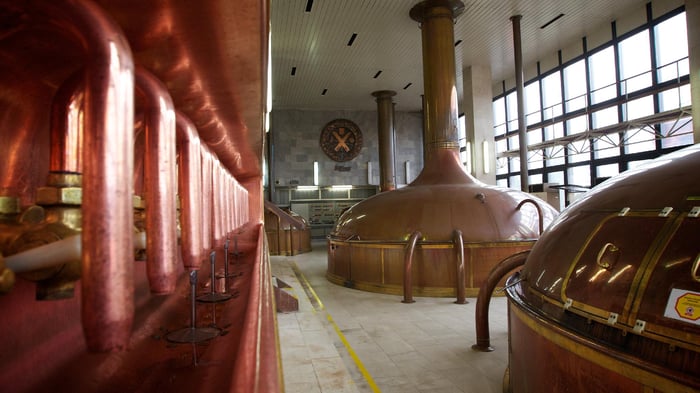 Gilead Sciences stock fell 8% after the biotech giant reported its first-quarter results. Continued drops in revenue from hepatitis C-related treatments were expected, although the declines there were somewhat greater than most had anticipated. The worst news, though, came from a surprising halt to growth in sales of Gilead's HIV treatments, where segment revenue rose only a fraction of a percent due to eroding revenue from the older products in the biotech's HIV-fighting lineup. Until investors have a firmer handle on exactly what's happening with Gilead outside of hepatitis C, it'll be hard for the stock to mount a lasting recovery.

Finally, shares of Yum China Holdings finished down 13%. The purveyor of KFC, Pizza Hut, Taco Bell, and other fast-food restaurant concepts in China reported a 15% rise in total revenue, with same-store sales growth of 3% overall. Yet investors weren't happy with the performance of Pizza Hut in particular, which suffered a 5% drop in comps and saw operating profit fall by nearly 60% from the year-earlier period. CEO Joey Wat said that even with Pizza Hut's struggles, the company remains "committed to our revitalization plan and key focus areas to drive sales growth." Yet investors don't seem nearly as comfortable with the strategic moves Yum China is making to shore up the chain, and it will have to demonstrate stronger results in order to convince some skeptics.