Please ensure Javascript is enabled for purposes of website accessibility
Log In Help Join The Motley Fool
Free Article Join Over 1 Million Premium Members And Get More In-Depth Stock Guidance and Research
By Rich Smith – May 3, 2018 at 1:06PM

No, actually, Seaspan is an expensive stock, with $4 billion in net debt outweighing its own market cap by a factor of four, and a debt-adjusted market cap of $5.1 billion (adjusted P/E of 27).

Which of these interpretations of Hong Kong-based containership operator Seaspan is the right one? That's what we aim to find out today. 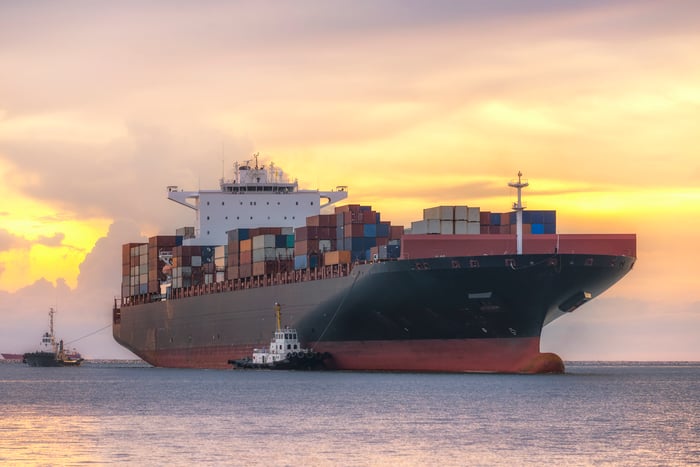 If you ask the analysts at Merrill Lynch, they're probably inclined to go with the first theory. In a note covered on TheFly.com today, Merrill Lynch announces an upgrade of Seaspan by two notches, from underperform to buy, and assigns the containership company's stock a new target price of $10 a share -- 19% higher than where the stock trades today.

Merrill Lynch argues that the "containerized trade market" is "improving," and that Seaspan's "strong operational performance" positions the company to profit from it. Granted, the Shanghai Containerized Freight Index, which tracks shipping rates for containership operators, is down from its highs of early 2017 when it nearly touched 1,000. But the SCFI has risen roughly 100 points over the last couple months, and now tips the scales at a value of 761 points  -- which seems like an improvement to me.

As for Seaspan's own improvements, gross profit margin at the shipper grew 110 basis points last quarter to 64.1%. Operating profit margin grew in each of the last two quarters, and now sits at 36.9%. And net profit margin is up over the last three quarters, now reading 30.1%. (All data courtesy of S&P Global Market Intelligence.)

So that part of Merrill Lynch's buy thesis, too, appears shipshape.

But what about Seaspan's net debt -- the $4 billion more debt than cash on Seaspan's balance sheet, that turns this trim, $1.1 billion-market-capped clipper into a debt-heavy scow lugging around a $5.1 billion enterprise value?

According to Merrill Lynch, debt's not an issue with Seaspan, because "its improving cash flow should allow the company to accelerate its de-levering." Does that argument hold water as well?

In fact, you have to look all the way back to 2013 to find a year in which Seaspan did not burn cash. Over the past 15 years, the company has generated full-year positive free cash flow just three times: In 2013, 2012, and even farther back in 2004. In every other year during this time span, Seaspan burned cash -- as it's doing again today, and as analysts expect it to continue doing all year long.

Granted, analysts who follow the stock generally agree with Merrill Lynch that things could begin looking up for Seaspan next year. Consensus estimates predict that Seaspan will generate positive free cash flow of more than $630 million in 2019, and again in 2020. My worry is that these estimates may be overoptimistic.

Of course, a massive turnaround in container shipping rates could boost Seaspan's fortunes and permit the company to generate outsize free cash flow. It's not likely, but unprecedented events do sometimes occur in the container shipping world. (And I know some of my fellow Fools entertain such hopes.) Still, I wouldn't want my money invested in hopes of such a miracle.

If $100 million in free cash flow is the best Seaspan can do, then I fear the chances of the company paying down its debt in any significant way are slim to none. And unless and until Seaspan finds a way to deal with its debt load, I cannot recommend Seaspan stock as a buy.