It hasn't been an easy start to 2018 for shareholders of Wayfair (NYSE:W). The company -- which is essentially aiming to be the e-commerce solution for all-things home furnishings -- has dealt with pressure from short-sellers and a continuing lack of movement toward profitability. That caused shares to lose one-third of their value from mid-February to this week, when the company reported earnings.

But investors got a reprieve from the negative sentiment on Wednesday morning as the company announced earnings that, while not entirely positive across the board, were enough to convince many that the company is slowly building a moat around itself. 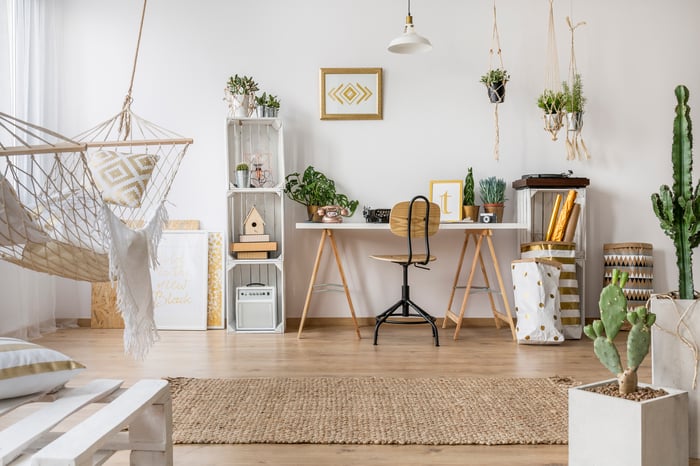 Before digging into the nuts and bolts of the company's first quarter performance, let's take a look at the headline numbers.

Wayfair's core direct retail revenue growth -- which doesn't include some very small revenue the company derives from other operations -- grew even faster: up 48% for the first quarter. Outside of that, financial results were a mixed bag.

While free-cash-flow losses narrowed, profit losses increased dramatically, even after backing out stock-based compensation. That was because, while overall revenue grew 46%, gross margins contracted over 150 basis points, which management attributed to lower-margin international sales as operations are set up in the U.K. and Germany. Additionally, customer service and merchant fees climbed 54%, and other operating expenses, not including advertising, jumped 48%.

Signs of a moat emerging?

One of the biggest aspects of Wayfair's business that short-sellers are quick to point out is that the company has few sustainable competitive advantages -- especially in the face of the 800-pound gorilla in the e-commerce room, Amazon.com.

But there were a few data points that continued to lend credence to the fact that Wayfair's brand is gaining traction and proving to be a stickier and stickier service. First, advertising expenses grew just 37%, outpaced by the 48% jump in direct retail sales. If this trend continues, the company may not have to spend nearly as much in attracting new business as time goes on.

It's the final metric -- orders placed by repeat customers -- that really bears watching. Wayfair has no loyalty or membership program to keep customers locked in. However, because of its investments in fulfillment centers and a delivery network, it can offer a service that few outside of Amazon could match. If customers are happy with the brands, prices, and service offered at Wayfair, they'll keep coming back. An argument could be made that this not only makes Wayfair a valuable brand, but that high-switching costs are taking hold.

Just as important, Wayfair doesn't need to spend nearly as much money on advertising for those existing customers. And incrementally, each existing customer adds more and more to the company's top line: net revenue per active customer was up 10% during the quarter, to $432 spent.

For the second quarter of 2018, management sees the strong growth continuing. International sales -- which almost doubled in the first quarter, to $203 million, or 14% of all sales -- are expected to lead, with growth of 80% to 90%. Domestic sales are being forecast to grow between 35% and 37%. Put those two together, and investors can expect to see the top line grow to a midpoint of $1.56 billion, or about 42% compared to the same time last year.

Don't expect profitability to be immediate, either. Management remains committed to building out its delivery network, expanding international operations, and advertising to gain market share. Adjusted earnings before interest, taxes, depreciation, and amortization (EBITDA) margins are expected to show a loss of 2.1% to 2.4% for the quarter.