Please ensure Javascript is enabled for purposes of website accessibility
Log In Help Join The Motley Fool
Free Article Join Over 1 Million Premium Members And Get More In-Depth Stock Guidance and Research
By Steve Symington – Updated May 4, 2018 at 4:01PM

The music-steaming company crushed expectations with its first-quarter report. Here's how.

More specifically, Pandora's revenue rose 1% year over year to $319.2 million, and it translated to an adjusted net loss of $68.6 million, or $0.27 per share. That might not sound encouraging at first, but Pandora's revenue arrived far above its own guidance for a range of $295 million to $305 million. And investors were anticipating a significantly wider adjusted net loss of $0.38 per share. 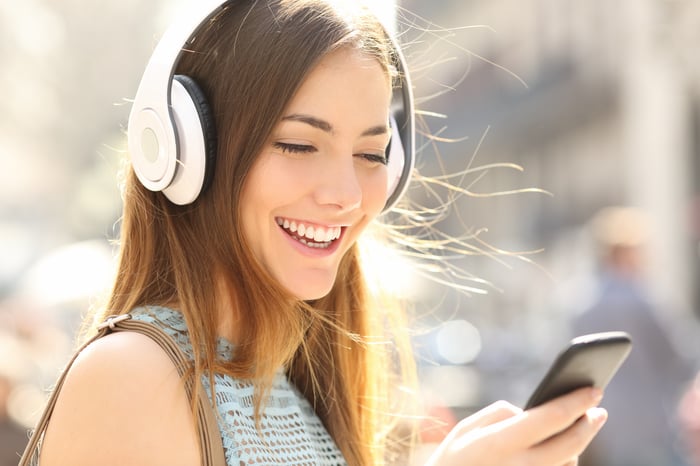 To be fair, Pandora's revenue would have climbed 12% had it not been for last year's sale of Ticketfly and the wind-down of its Australia/New Zealand (ANZ) business.

But digging deeper, Pandora also revealed that paid subscribers of its Pandora Plus and Pandora Premium services -- which cost $4.99 per month and $9.99 per month, respectively -- grew 19% year over year to 5.63 million. That drove a 63% increase in subscription revenue to $104.7 million, which now represents nearly a third of Pandora's total sales. Meanwhile, advertising revenue comprised the rest, falling 3% (excluding ANZ) to $214.6 million.

Management also reminded investors that many of Pandora's strategic growth initiatives -- which were put into place when Lynch took the helm late last year -- are still in their early stages, and teased that we should see them build momentum "over the course of 2018 and beyond."

In the meantime, for the second quarter of 2018, Pandora told investors to expect revenue of $360 million to $375 million, or 7% year-over-year growth at the midpoint excluding ANZ and Ticketfly.

Consensus estimates technically predicted second-quarter sales near the high end of that range. But given Pandora's habit of under-promising and over-delivering, and with the potential for its strategic growth initiatives to gain steam in the coming quarters, I think investors are right to so aggressively bid up Pandora stock today.