Shares of Mueller Water Products (NYSE:MWA) stock are up 11.2% as of 12:25 p.m. EDT one day after the company trumped Wall Street estimates for both sales and earnings.

Mueller released its fiscal second-quarter 2018 earnings results after the close of trading Monday. Sales of $233.2 million for the quarter beat analyst expectations for $213.1 million, while "adjusted" earnings of $0.12 beat expectations for $0.10 in pro forma profits, encouraging investors. 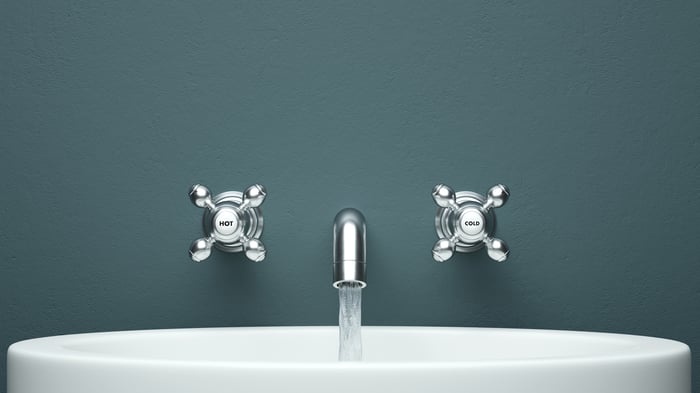 Profits are flowing quite nicely at Mueller Water, thank you very much. Image source: Getty Images.

Read a little closer, and you'll see that Mueller Water only actually earned about $0.06 per share as calculated according to generally accepted accounting principles (GAAP). Still, that was twice what Mueller had earned in fiscal Q2 2017, and the company's revenue grew a bona fide 17% year over year.

The greater increase in profits relative to sales growth was attributable to improved profit margins at the company. Gross margins expanded to 31.9% in the quarter, thanks to "higher volumes, cost productivity improvements and favorable pricing."

Mueller Water CEO Scott Hall expressed satisfaction with the "healthy demand in both municipal and residential end markets" he's seeing. He predicted that "higher volumes, continued execution of our cost productivity initiatives and improved pricing" combined with "favorable growth in our end markets" would yield even stronger results "in the second half of the year compared to the first half."

For the full fiscal year, Mueller is guiding investors to expect sales growth of between 7% and 9% relative to fiscal 2017 numbers. At the midpoint, that implies sales of about $892 million for the full year. With analysts still forecasting sales of less than $876 million, Mueller appears to be setting itself up to beat expectations again.