Over the past few years, the Brink's Company (NYSE:BCO) has defied expectations in a dinosaur industry: cash security and management. While a slew of fintech companies have risen with the almost singular purpose of ridding the world of paper currency, Brink's has transformed itself into a multi-billion dollar cash management titan from its humble roots of transporting travelers' valuables from train stations to hotel rooms more than a century and a half ago.

Since CEO Douglas Pertz took the position in June 2016, Brink's has crushed the market following a strategy of growth via acquisitions. In the company's first quarter, non-GAAP revenue rose to $853 million, a 15% increase year over year, and adjusted EPS grew to $0.65, a 12% increase year over year. The company's operating margin also improved to 8.4%, up from 7.2% in 2017's first quarter.

While the company continues to show growth, investors have to wonder if the price it is paying in accruing debt is worth it. Let's take a closer look at the company's growth strategy, its accumulating mountain of debt, and whether the end result will be worth the price Brink's pays to achieve it. 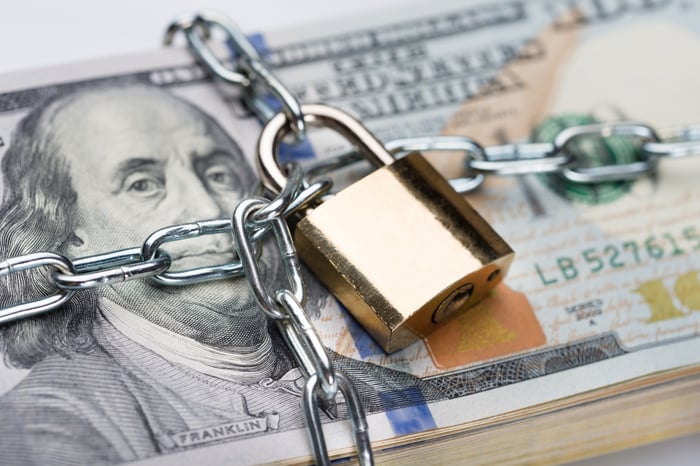 Brink's Company has forged a cash management and protection business empire from humble beginnings but, thanks to accruing debt and the rising prominence of digital and electronic payments, its future is far from certain. Image source: Getty Images.

Brink's calls its strategy to grow via acquisitions its 1.5 Strategy. During the company's first-quarter conference call, Pertz explained what the company had done through acquisitions during his tenure and what is was looking for in future acquisitions. He said:

With our organic initiatives continuing to gain traction, we're just beginning to layer in additional growth through acquisitions. And as we said in the past, we call this our Strategy 1.5. We focus on acquisitions in our core business in core geographies, what we call core-core and also, on core acquisitions in adjacent geographies or core-adjacent ... We continue to have a strong pipeline of acquisition targets that offer new opportunities to increase route density, add new customers and capture cost synergies with strong returns as we've seen so far.

In 2017, the company paid $365 million to complete six acquisitions that are expected to add between $60 and $70 million in EBITDA this year. Pertz said the plan is to spend an additional $800 million on new acquisitions over the next two years which would bring the grand total to about $1.2 billion spent over a three year period. Concerning future acquisitions, he insisted, "We will remain disciplined in our goal to achieve both synergy models between 6 and 7x EBITDA."

A growing amount of debt

The problem is the company is accumulating an awful lot of debt while it pursues this growth-by-acquisition strategy. Last March, the company's total debt was $301 million; this quarter, it rose to $681 million, a whopping 126% increase year over year! If it completes its targeted spending for future acquisitions in 2018 and 2019 and meets all of its cost synergy goals, Brink's expects to hold $1.1 billion in debt by the end of 2019, a 61% increase from today's levels. This would give the company a 1.5 leverage ratio, defined as net debt divided by adjusted EBITDA. That's a lot of debt!

Are these acquisitions worth it? Well, it depends. If the company can meet its price of 6-7 times EBITDA, they very well could be. However, targeting the right acquisitions, whether core-core or core-adjacent, is absolutely critical. Brink's management also needs to ensure its synergy goals are realistic when it takes on a new company and its culture so that its 6-7 times EBITDA goal can be feasibly obtained-- something easier said than done. Still, I would probably be on board with the company's strategy if it wasn't for one nagging concern.

The biggest threat facing Brink's is the very nature of the industry it inhabits. While cash will, for the foreseeable future, probably serve a purpose in the global economy, I don't think it can be argued that its use will soon be on the decline. Mastercard Inc (NYSE:MA) has long maintained that about 85% of the world's transactions were facilitated using cash. Last year, the company updated that number to being just above 80% and, given current trends, I believe this number will continue to fall.

Mastercard recently acquired Oltio, a South African mobile payments start-up. In the press release announcing the acquisition, Mastercard South Africa President Mark Elliott said "Too many consumers and merchants in the MEA region [Middle East-Africa] are stuck in a cash economy that doesn't work for them. By combining our joint expertise, technologies and reach, we can bridge the divide between the region's cash economies and the digital future, bringing the benefits of digital payments to more people and businesses."

Mastercard and Visa Inc (NYSE:V) are working fast to enable consumers in developing economies to use QR codes, those black-and-white matrix images, to enable digital transactions. These are popular in emerging countries because they don't require expensive hardware or a robust landline network for merchants to be able to accept card payments -- only smartphones are required.

Visa is already seeing success with the international adoption of digital payments in economies only recently dominated by the use of cash. In its first-quarter conference call, Visa CEO Al Kelly said the number of merchants in India that could accept card payments had doubled to three million since the end of 2016.

The question investors should ask is whether gaining share in what could soon be a declining market is worth the risk Brink's deteriorating balance sheet presents. Given the company's adjusted trailing twelve month EPS of $3.07, it currently trades for a P/E ratio of about 24.4. That's almost right in line with the S&P 500 index's average multiple. That just does not seem to be a compelling enough value to consider an investment in Brink's at this time, especially considering its rising debt levels and its questionable total addressable market going forward.