Please ensure Javascript is enabled for purposes of website accessibility
Log In Help Join The Motley Fool
Free Article Join Over 1 Million Premium Members And Get More In-Depth Stock Guidance and Research
By Chris Neiger, Jordan Wathen, and Danny Vena – Updated May 9, 2018 at 10:58AM

Apple, Visa, and Microsoft will go the distance with your financial future.

To find the best dividend stocks, investors need to pick companies that offer reliable yields, with regular payout increases, and choose stable companies that they can bet on over the long term.

Unfortunately, not all dividend stocks are created equal. For example, some may offer sky-high yields, but lack the financial stability and endurance to become wealth-generating investments. To help you navigate the world of dividend stock investing, and find a few companies that should pay you dividends for the rest of your life, we asked these Motley Fool investors for some ideas. Here's why they think Apple (AAPL -3.00%), Visa (V -1.34%), and Microsoft (MSFT -1.94%) could end up being dividend stocks to pay you for years to come. 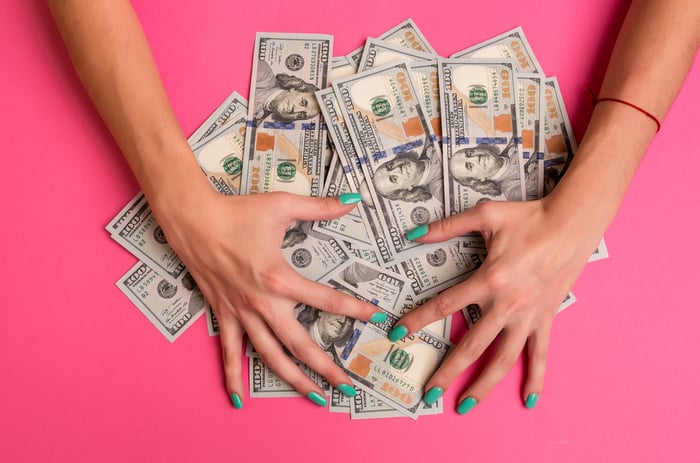 A dividend play Buffett's betting on

Danny Vena (Apple): Until recently, there was a lot of fear and doubt surrounding Apple. Rumors regarding weak results produced by the company's suppliers, slowing demand last quarter for the latest version of its flagship iPhone, and concerns about the company's growth prospects all weighed on the stock.

Three things turned the tide on Apple shares. The company announced impressive earnings results, increasing its revenue to $61.1 billion, up 16% year over year, while earnings per share grew 30% to $2.73. That beat analysts' consensus estimates for revenue of $60.9 billion and earnings of $2.64.

Apple also revealed its annual capital return program, approving an additional $100 billion share buyback, saying its stock was undervalued. The company also raised its dividend for the sixth time in as many years, increasing its quarterly payout by nearly 16%. Even though the company has nearly doubled its dividend since 2012, it still pays less than 25% of its profits to support the payout, so these annual increases will likely continue unabated. 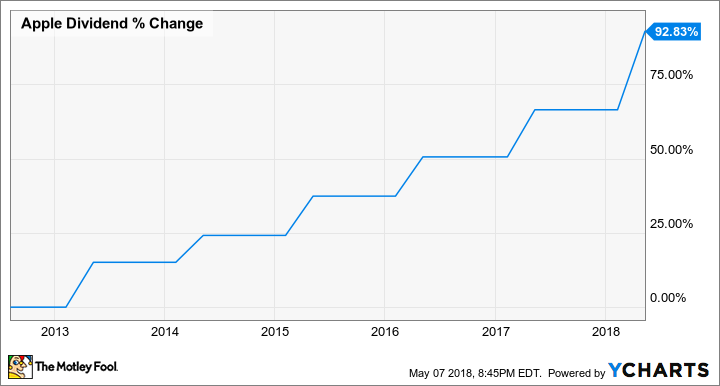 Finally, legendary investor and Berkshire Hathaway (BRK.A -0.06%) (BRK.B -0.95%) CEO Warren Buffett revealed that his company had purchased a massive 75 million Apple shares last quarter, adding to its already impressive haul of 165 million shares -- bringing its ownership of Apple to about 5%.

Buffett said that trying to determine how many iPhones Apple will sell in a given quarter "misses the point." In giving insight into his recent purchases, he reminded investors that they should be thinking longer term. "Nobody buys a farm based on whether they think it's going to rain next year or not," Buffett said. "They buy it because they think it's a good investment over 10 or 20 years."

Take it from the Oracle of Omaha. Buy Apple -- it should be paying you for the rest of your life.

A dividend with double-digit growth potential

Jordan Wathen (Visa): The payments industry strikes me as an excellent place for long-term dividend investors to find dividend-paying stocks that will grow their dividends at an above-average rate for decades. Visa is the best of the payments companies today, offering a current yield that can grow far faster than the stock market average.

Though Visa is a household brand that dates back to the 1950s, it still has ample room to grow, as evidenced by the fast way that net operating revenue jumped 13% in the most-recent quarter, helped by increased debit and credit card spending. As transaction volume shifts from cash to card, Visa is one of the best positioned to benefit from increased electronic payments.

I consider Visa to be a royalty on the global economy, as it collects a small fee for every transaction that moves over its network. In the United States, e-commerce is a tailwind for payments growth, as nearly half of personal consumption payments flow over its network. In emerging markets like India, Visa has a head start, as an executive noted on the company's conference call that the company had more than a 50% share of debit and credit card spending in the world's second most-populous nation.

Visa is a company that can capably increase its dividend at a double-digit pace for years on end, powered by an increasing dividend payout ratio and high-single-digit increase in earnings for as far as the eye can see.

The Windows makers won't let you down

Chris Neiger (Microsoft): Microsoft has been reinventing itself for the past few years, and so far the results have been substantial. In the full-year fiscal 2017, Microsoft's sales were up 5% from the year-ago quarter, net income jumped by 26%, and diluted earnings per share popped 29% year over year.

Microsoft is thriving under the leadership of Satya Nadella, and his vision for the company has led to new growth markets like cloud computing. In the third-quarter fiscal 2018, Microsoft's Intelligent Cloud segment -- which includes sales of its server products and cloud services -- increased 17% year over year and contributed 29% of the company's total revenue in the quarter.

The cloud is essential to Microsoft's future because the public cloud-computing space will be worth $411 billion by 2020. Microsoft is already a leader in this space, and only Amazon.com's AWS has a more substantial portion of the cloud computing market right now.

Investors should be pleased to see Microsoft's current growth in the cloud and know that there's likely more ahead for the company. But they can also bank on Microsoft's commitment to its shareholders as well.

In the third quarter, Microsoft returned $6.3 billion to shareholders through dividends and share repurchases, which was a 37% increase from the year-ago quarter. It's worth pointing out that these moves come on top of 14 consecutive years of Microsoft increasing its dividend.

The tech giant pays a respectable 1.8% yield right now, which isn't as high as you could get with some other dividend plays, but not all companies offer the same stability and long-term growth potential as Microsoft. The company has shown that it can move into new growth markets like cloud computing while maintaining its core businesses, which is a great combination for investors looking for a dividend stock to pay them for many years to come.