Please ensure Javascript is enabled for purposes of website accessibility
Log In Help Join The Motley Fool
Free Article Join Over 1 Million Premium Members And Get More In-Depth Stock Guidance and Research
By Dan Caplinger – May 9, 2018 at 4:28PM

The stock market jumped on Wednesday, with the Dow Jones Industrial Average finishing up by triple digits and other major benchmarks following suit with similar-sized gains. Attention once again focused on the oil market, where prices rebounded to climb to new multiyear highs above $71 per barrel. Investors seem to see oil's strength as indicating stronger levels of economic activity, choosing not to fear any adverse pressure on prices that could result from higher costs for consumers and businesses that rely on energy products. Good news from several individual companies also helped keep sentiment positive. Axon Enterprise (AXON 1.39%), TripAdvisor (TRIP -1.30%), and iQiyi (IQ -2.17%) were among the best performers on the day. Here's why they did so well.

Shares of Axon Enterprise jumped 22% after the company released first-quarter financial results. The maker of body cameras for law enforcement and stun guns reported a 28% increase in revenue, and net income very nearly tripled from year-ago levels. Despite having a longer-established market for its Taser weapons, Axon is seeing much faster growth for its software and sensors unit, which includes both its body camera products and its Evidence.com subscription-based cloud platform for information management and tracking. With plans to double down on that higher-growth portion of its business, Axon hopes to diversify its overall operations and avoid any potential fallout from its exposure to the weapons industry. 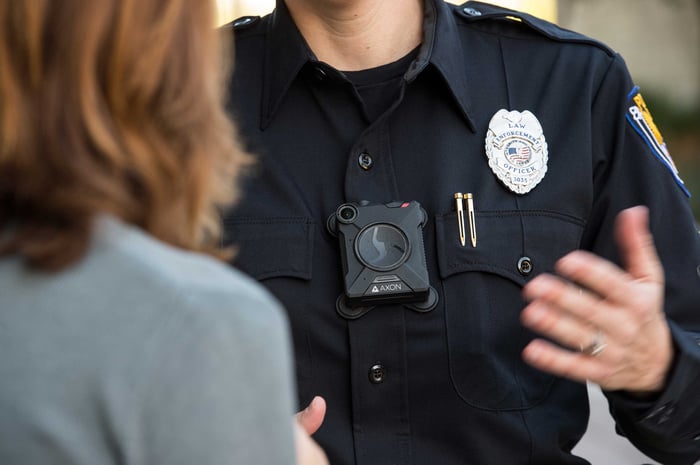 TripAdvisor stock gained 23% in the wake of the company's quarterly earnings report, which included performance that defied the slowdown that some had expected. The online travel specialist managed to produce revenue growth despite projections for falling sales, and its bottom line jumped 20% on an adjusted basis rather than contracting as anticipated. TripAdvisor's review business is still growing fast, and investors are already seeing the rewards of the company's efforts to be more efficient. Competition is still fierce in online travel, but TripAdvisor is taking advantage of its opportunities.

iQiyi gets a big audience

Finally, shares of iQiyi rose 11%. The Chinese streaming video entertainment company said earlier today that it had signed up more than 1 million new users in just a single week as a result of the joint membership program that it's running with e-commerce retailer JD.com. The two companies announced the strategic partnership last week, hoping that by offering customers who are interested in one of the companies' premium online services free access to the other, both will eventually win those customers' long-term business. For iQiyi, which only recently became an independent company, the collaboration could help keep growth rates strong for the foreseeable future.