Please ensure Javascript is enabled for purposes of website accessibility
Log In Help Join The Motley Fool
Free Article Join Over 1 Million Premium Members And Get More In-Depth Stock Guidance and Research
By Leo Sun – Updated May 10, 2018 at 10:45PM

But that might have been the retailer’s plan all along.

Abercrombie & Fitch (ANF 3.37%) staged a remarkable comeback in recent quarters, with its revenue growth rebounding and its profits stabilizing. The stock more than doubled over the past 12 months, making it one of Wall Street's favorite comeback plays in brick-and-mortar retail. However, Abercrombie still isn't impressing the affluent teen shoppers who were once the brand's core demographic.

According to Piper Jaffray's latest semi-annual "Taking Stock With Teens" survey of 6,000 U.S. teens for spring 2018, Abercrombie & Fitch and Hollister were both listed as "downtrending brands" among upper income teens. Upper income teens, defined as those living in households earning over $100,000 per year, accounted for 1,400 of the survey's total respondents. 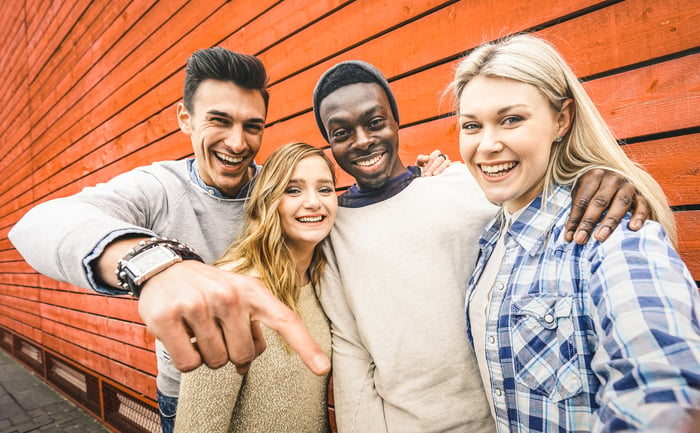 The survey found that 4% of upper income males called Hollister a brand they "no longer" wore, causing it to rank eighth on the list of downtrending brands. Eleven percent of upper income females said they no longer wore Hollister apparel, moving the brand to third on the list of losers, while Abercrombie & Fitch itself ranked fourth, with 8% of affluent female teens dumping the brand.

In the fall 2017 survey, Hollister was listed as the fifth favorite brand for upper income teens. But in the spring 2018 survey, Hollister had dropped off the list -- which was led by Nike (NKE 2.50%), American Eagle Outfitters (AEO 2.87%), and Adidas, in that order.

It's not as a bad as it seems

Piper's survey results initially look bad for A&F and Hollister. But if we look at Abercrombie and Hollister's comps growth over the past four quarters, the situation doesn't seem that bleak.

The reason is that CEO Fran Horowitz, who took over in early 2017, is aggressively resetting the two brands to compete more effectively against fast fashion retailers like H&M and Inditex's Zara. To do so, Abercrombie is slashing prices, remodeling stores, and launching marketing blitzes to "reset and reshape expectations and perceptions of the brand."

Simply put, Horowitz is overwriting former CEO Mike Jeffries' infamous comments about how the company only makes "exclusionary" apparel for "cool" and "attractive" teens. Instead, A&F's new marketing campaign, dubbed "This is the Time," targets older shoppers in their early 20s.

For Hollister, the company ramped up a marketing blitz across the music, video, and gaming industries, and hired social media influencers. Those moves attracted more average-income teen shoppers in Piper's survey, who came from households with an average household income of $56,000.

Three percent of average-income males and females chose Hollister as a "preferred" clothing brand, which ranked sixth for both genders. But A&F, which now generates lower revenues than Hollister, didn't make the cut.

Piper's survey doesn't support a bearish case against A&F, but it doesn't support a bullish one either. Instead, it confirms that A&F is gradually pivoting its namesake brand toward young adults while reviving Hollister for average-income teens with fresh styles, marketing blitzes, and renovated stores.

However, Piper's survey also reveals that one of A&F's direct rivals, American Eagle Outfitters, seems to be faring better with teen shoppers. AEO's namesake brand captured 10% of both the upper-income and average-income groups, and ranked second to Nike in both groups.

Therefore, A&F's turnaround under Horowitz is impressive, but there's still plenty of room for improvement. Investors should keep an eye on its first-quarter report on May 24 to see if that turnaround can maintain its current momentum.