Most of the time, quarterly financial results are important for companies. Investors eagerly await the update on revenue and earnings. But for Celldex Therapeutics (NASDAQ:CLDX), it's a different story.

The big news everyone anxiously looked forward to for the clinical-stage biotech was the results from a pivotal clinical study glembatumumab vedotin (glemba) in treating triple negative breast cancer (TNBC). Unfortunately, Celldex announced on April 16 that glemba failed to meet the primary endpoint in the study.

Celldex provided its first-quarter update before the market opened on Thursday. The most important information for investors is how the company plans to move forward after the disappointing clinical results for glemba. But Celldex's financial position as of the end of the first quarter is a critical factor in those plans. Here's what you need to know from the biotech's update. 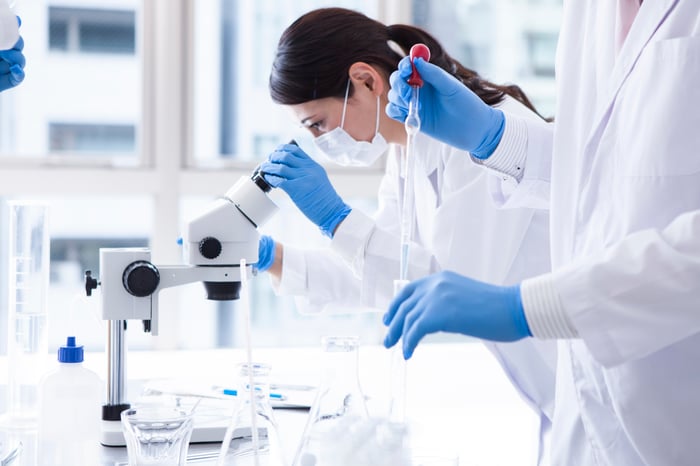 In light of the failure of glemba in the pivotal study targeting TNBC, Celldex's cash position is the financial number that matters most for the company right now. The good news is that the biotech is in pretty good shape on that front. Although Celldex used $28 million to fund operations, it generated $11.7 million in cash through sales of stock through its existing Cantor Fitzgerald agreement.

You might see Celldex's net loss, though, and wonder how Celldex's cash stockpile could last much longer. However, that net loss reflects a goodwill impairment of nearly $91 million and an $18.7 million impairment charge for glemba-related intangible assets. Those are one-time negative accounting adjustments that had nothing to do with Celldex's cash burn.

Celldex spent $21.9 million on research and development in the first quarter. The company also spent $5.6 million on general and administrative expenses. Those figures will be lower the next time Celldex reports its quarterly results. After the glemba setback, Celldex made significant cuts to its business operations, including a corporate restructuring in late April.

In addition to discontinuation of its glemba clinical programs, Celldex also halted development on a couple of other programs to conserve financial resources. The company is not moving forward with a phase 1 clinical study of CDX-014 in the treatment of renal cell and clear cell ovarian carcinomas. This move made sense because CDX-014 is an antibody drug conjugate (ADC). ADCs are typically more expensive to develop than other types of drugs. Celldex also threw in the towel on studies involving CDX-1401.

Celldex Therapeutics CEO Anthony Marucci said, "Celldex has made considerable progress on an important strategic prioritization of our pipeline, following announcement in April of the METRIC study results in triple-negative breast cancer and discontinuation of the glembatumumab program across all indications."

In 2018, we will focus primarily on continued clinical development of two company-sponsored programs -- CDX-1140, a promising CD40 agonist, and CDX-3379, which blocks ErbB3, a receptor thought to play an important role in regulating cancer cell growth and survival. Development of varlilumab and CDX-301 will also continue externally through investigator-sponsored initiatives and internally through inclusion in combination studies.

Celldex has now endured two major clinical setbacks -- one with Rintega in 2016 and the recent clinical failure for glemba. It's not the end for the biotech, though. As Marucci mentioned, the company is moving forward with development of several clinical candidates.

The biotech has a nice cash stockpile, and its cost-cutting moves made over the last month should help it conserve that cash. However, Celldex will definitely need to sell more shares through its Cantor agreement down the road. Between the remaining stock that can be sold under this agreement and its current cash position, the company thinks that it can fund operations through 2020.

Clinical-stage biotech stocks come with high risks, but they can also deliver high rewards if their pipeline candidates succeed. The glemba clinical failure provides a good example of why these stocks are so risky. But it would be a mistake to write off Celldex's chances with its other clinical programs. Sometimes failures sow the seeds of future success.