Please ensure Javascript is enabled for purposes of website accessibility
Log In Help Join The Motley Fool
Free Article Join Over 1 Million Premium Members And Get More In-Depth Stock Guidance and Research
By Timothy Green - May 10, 2018 at 3:20PM

The mobile chip giant's plan to storm the data center came up short.

The rapid growth of cloud computing has made the server chip market bigger and more lucrative than ever before. Cloud infrastructure providers and other hyperscalers need massive quantities of chips to scale their operations, and Intel (INTC 1.46%), which dominates the market with a near-monopoly, has been happy to oblige.

Qualcomm (QCOM 2.34%), best known for its mobile chips, attempted to break into the server chip market last year. Qualcomm began commercially shipping its Centriq 2400 ARM-based server processor in November, with companies including Microsoft, Alibaba, and Hewlett-Packard Enterprise participating in the launch event. These chips had the potential to provide a viable alternative to Intel in the data center, loosening that company's grip on the market while pushing down prices for customers. 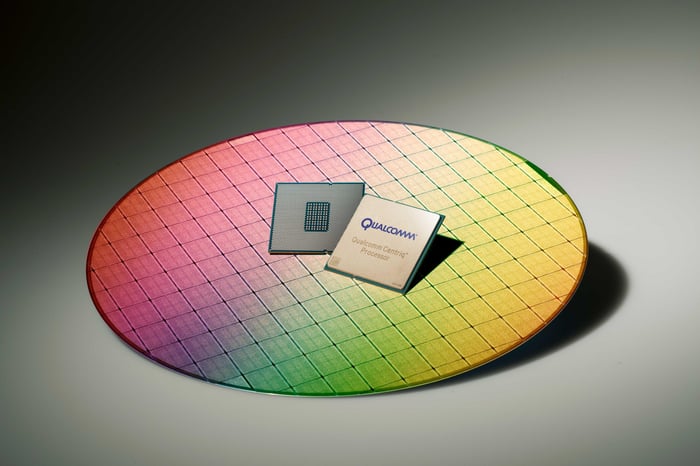 It now looks like that potential will go unrealized. About seven months after the commercial launch of the Centriq 2400, Bloomberg is reporting that Qualcomm is planning to exit the server chip business altogether, either by shutting down or selling its server chip unit. The company has been cutting costs this year, and its server chip ambitions will likely be a victim of that effort.

Why is it so hard to go up against Intel?

Qualcomm touted the Centriq 2400's performance at launch, saying that it offered quadruple the performance per dollar and 45% better performance per watt compared to Intel's high-end Xeon Platinum 818. That may have been the case, but it wasn't enough to pry away any meaningful market share from Intel.

Why? With Intel having a stranglehold on the server chip market, its chips, and the x86 architecture, are the standard. Swapping out Intel chips for chips based on a different architecture -- in Qualcomm's case, ARM -- is not trivial. Everything is built and optimized for Intel chips.

Here's an illustration of what Qualcomm was up against. Alphabet's Google announced in early 2016 that it was developing an open server architecture that would support POWER chips from International Business Machines (IBM 1.11%). POWER was already supported across Google's toolchain at that time, so the effort began even earlier. It took until March of this year for Google to announce that POWER chips had been deployed in its data centers, and that deployment is likely small at the moment.

Even for Google, with essentially limitless resources, getting to the point where it could mix and match different types of processors for production workloads in its data centers took years. It seems that Qualcomm lacked the patience to see its server chip efforts through.

While Qualcomm's expected exit from the server chip business knocks out one source of competition for Intel, there are others. IBM is one, with its recently launched POWER9 chip and its OpenPOWER initiative slowly making inroads. The company is aiming to eventually win a 10% to 20% share of both the hyperscale data center and high-performance computing markets. The Google deployment is a step in the right direction.

A more immediate threat is Advanced Micro Devices (AMD 2.76%). AMD launched its EPYC server processors last year, with the aim at clawing back the market share it had lost over the years. AMD was once a major player in the server chip market, but its presence had eroded thanks to lackluster products. The company expects to achieve a mid-single-digit unit share of the server chip market by the end of 2018.