Please ensure Javascript is enabled for purposes of website accessibility
Log In Help Join The Motley Fool
Free Article Join Over 1 Million Premium Members And Get More In-Depth Stock Guidance and Research
By Jim Crumly - May 10, 2018 at 5:10PM 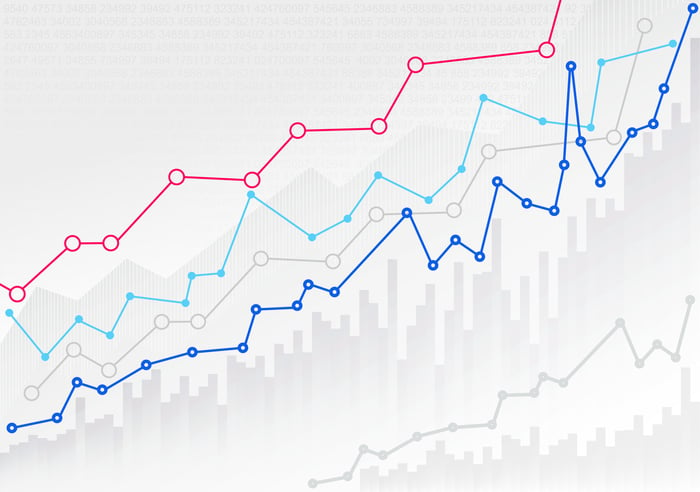 Roku announced first-quarter results that beat expectations, but the stock closed down 1.7% despite initially rising on the news. Revenue grew 36% to $136.6 million, well above guidance of $120 million to $130 million and the analyst consensus of $127 million. The company reported a net loss of $6.6 million or $0.07 per share, compared with guidance for a loss of $15 million to $21 million, and Wall Street expectations of a loss of $0.15 per share.

Platform revenue grew 106% and player revenue declined as expected, falling 3%. Gross margin jumped to a new record after slipping a point sequentially last quarter, coming in at 46.2% compared with 39% last quarter and 38.8% in the year-ago period. The company added 1.5 million accounts in the quarter, to a total of 20.8 million, a 47% increase year over year. Growth in streaming hours outpaced account growth, rising 56%, and average revenue per user jumped 50% to $15.07.

Looking forward, the company raised its outlook for the full year, now expecting revenue between $685 million and $705 million, above the $675 million analysts have been expecting. The company also expects to operate at or near breakeven on an adjusted EBITDA basis.

Last quarter the stock plummeted when Roku issued Q1 revenue guidance below analyst expectations, but the company delivered results that not only beat that guidance, but the original Wall Street expectations as well. The stock remains well below its level of that time, suggesting it's a better bargain now.

Shares of Ubiquiti Networks jumped 11% after the company released fiscal third-quarter results that exceeded analyst estimates. Revenue increased 14.7% to $250.4 million and adjusted EPS grew 25.6% to $0.98. Analysts were expecting the company to earn $0.93 on sales of $247.9 million.

Revenue from the service provider technology segment fell 3.6%, but enterprise technology sales grew 31.6% to $149.5 million. The Europe, the Middle East, and Africa geography generated the highest sales of any region, and also had the highest growth this quarter, with sales up 29.6%.

Ubiquiti reversed a decline in gross margin last quarter that was caused by disappointing sales of a newly released consumer product. Gross margin was 45.7% compared with 38.6% in Q2, and beating the 45.4% reported in the quarter last year.

The company has bought back $292 million of its stock through May 7, reducing share count by 6.4% since last year, and has repatriated $677.2 million from foreign subsidiaries that will be used partly for future share repurchases. The company didn't comment on the SEC subpoena that was filed in February, but said in its 10-Q filing that it was in the process of responding.

Ubiquiti's revenue beat and the big improvement in margins helped address investor concerns that arose earlier in the year, and the market responded by boosting the stock to a new 52-week high.

1 Stock That Reminds Me of Amazon in the Beginning