April was not a fun time to own stock in defense companies, with such storied names as Lockheed Martin, General Dynamics, and Northrop Grumman all reporting strong earnings -- but seeing their stock prices pummeled regardless, on fears ranging from weakening profit margins to dwindling free cash flow.

Last week, Huntington Ingalls (NYSE:HII)-- the former shipbuilding arm of Northrop Grumman and traditionally the last of the big defense contractors to report earnings -- delivered its quarterly update. And just like all the rest of the defense industry majors, Huntington Ingalls stock got destroyed after earnings.

Huntington Ingalls' stock sold for as much as $265 a share before all its peers began reporting bad news at the end of April. When other defense companies' stocks declined after earnings, it got caught in the downdraft. By May 3, when it reported its own earnings, the stock had lost 22% of its value, closing near $207 a share. 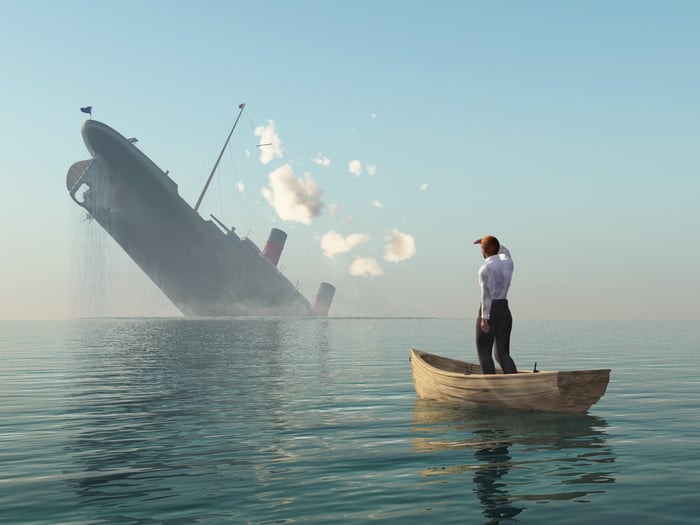 Huntington Ingalls' stock is sinking -- so why is Wall Street crying "all aboard!"? Image source: Getty Images.

How much of Huntington Ingalls' decline was due to negative sentiment regarding defense companies, and how much due to its own failings? You be the judge.

Nonetheless, Huntington's earnings came in shy of analyst expectations for $4.07 per share in profit, which surely disappointed investors. This probably explains why, despite improving its numbers considerably, Huntington Ingalls' stock declined even more after earnings than it already had before -- the bar had simply been set too high.

And then a miracle happened

It was then, though, that Wall Street rode to Huntington's rescue. Seeing Huntington Ingalls' stock sell off steeply in response to earnings, investment banker Wells Fargo was first to weigh in, announcing it was upgrading the stock to "outperform."

Wells cited Huntington's improving free cash flow (and hopes of more to come) as one reason for its optimism. At the same time, the banker noted that after its sell-off, Huntington Ingalls' stock was valued "much cheaper than its defense peers," as noted in a write-up on TheFly.com. Even looking at the stock today, after Huntington Ingalls has regained some of its losses, the company's shares are selling for only about 1.3 times trailing sales, versus valuations of 1.8 times sales for Lockheed, 1.9 times sales for General Dynamics, and 2.2 times sales (more than twice the historical average!) for Northrop Grumman.

That's some kind of discount.

Three trading days later, Citigroup, too, twigged to the fact that Huntington Ingalls' stock is looking like a relative bargain. Arguing that defense stocks "can still work," Citi upgraded Huntington stock to "buy" as well, arguing that the shares are attractively valued now that earnings expectations (which were clearly too high last week) have been reset. Today, both Wells Fargo and Citi think the stock is a buy, with price targets set at $260 and $290, respectively.

Here's an idea that may not have occurred to Wall Street just yet: What if maybe, just maybe, the fact that some defense stocks are overpriced doesn't mean that other defense stocks -- like Huntington Ingalls, for example -- are "buys" because they're slightly less overpriced?

Yes, with an earnings growth rate projected at 27.5% over the next five years, Huntington Ingalls is expected to grow strongly. Q1's report of a 1.4 book-to-bill ratio supports those expectations, as orders today turn into revenue (and profit) in quarters to come, and Huntington's profit margins are still rising. With Q1's numbers on the books, Huntington Ingalls now sports an operating profit margin of 11.8% over the past 12 months -- its second best profit margin ever (according to data from S&P Global Market Intelligence).

Still, as I've pointed out time and again, profit margins in the defense industry today are at or near all-time historical highs, and likely to revert to the mean sooner or later. Valuations, too, sit far above the long-term average valuation for defense stocks, which is roughly 1 times annual sales. At 1.3 times sales, Huntington Ingalls may be cheap-er than some of its defense industry peers, but that doesn't make the stock cheap.

In advising investors to buy it anyway, Wall Street is playing with fire -- and investors who heed its advice are liable to get burned.