Please ensure Javascript is enabled for purposes of website accessibility
Log In Help Join The Motley Fool
Free Article Join Over 1 Million Premium Members And Get More In-Depth Stock Guidance and Research
By Rich Smith - May 1, 2018 at 6:16AM

Honey, who shrunk the cash?

Entering the week on a high note, General Dynamics sold for nearly $226 apiece on Monday. But by the time Friday had rolled around, GD stock could be had for less than $204 a stub -- a 10% decline on the week.

So what happened? Did the company report a big loss? Did General Dynamics "miss estimates"? 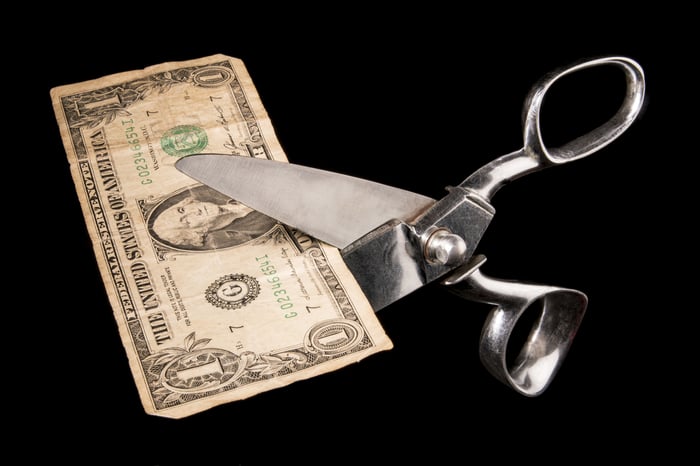 Far from it. In fact, General Dynamics pretty much walloped Wall Street's expectations for the first quarter of 2018. It reported  positive growth in sales, which were up 1.3% year over year at $7.5 billion, and even faster profit growth, with net income rising 6.8% to $2.65 per share, ahead of the Street's predicted $2.49 per share.

After the good comes the bad, and then the ugly

After the good news about beating earnings, General Dynamics moved on to the bad news about backlog, profit margins, and -- I worry that this may be the scariest number of all -- free cash flow. Let's address these in order:

Backlog. General Dynamics said that its "total backlog" at the end of Q1 was $62.1 billion. That means nothing without context, so let's add some. Backlog was stated to be $60.4 billion one year ago, so on the one hand, General Dynamics grew its order book by about 2.8% year over year -- faster than sales growth, which is good. On the other hand, GD had $63.2 billion in backlog at the end of last year, so backlog declined (i.e. General Dynamics didn't book enough new orders to replace the sales it fulfilled) in Q1, erasing some of the good work done late last year.

Profit margins. I've been warning about this for some time, but just to recap, profit margins at defense contractors in general (and at General Dynamics in particular) hit record, literal all-time highs last year. It was really only a matter of time before the laws of gravity asserted themselves and began pulling these record-breaking margins back down to earth. That's happening at General Dynamics now, with company-wide operating margins sliding 70 basis points to a (still robust) 13.7% last quarter.

Free cash flow. This is the number that worries me most. Unlike companies like Northrop Grumman, which historically go free cash flow-negative in Q1 of every year, General Dynamics has never had a negative quarterly cash profit in any quarter since as far back as Q4 of 2014 (according to data from S&P Global Market Intelligence). But it had one in Q1 2018. Operating cash flow dried up entirely, going negative to the tune of $498 billion. Combined with capital expenditures of $104 million, this left General Dynamics with negative free cash flow of $602 million for the quarter.

Management waved this away as a simple quirk related to the timing of "payments from customers and payments to suppliers," and that may be all it is -- a one-time bump in the road. (Free cash flow is, after all, a "lumpier" form of profit than GAAP net income.)

Still, this is a number that bears watching. It negates the effect of last year's strong Q4, which helped return General Dynamics to a position in which it was generating more cash profit than it was reporting as net income. It returns the company to a position where free cash flow is insufficient to back up all of its reported net income, and suggests a deterioration in the company's quality of earnings.

This is not something I like to see in the companies in which I invest -- and judging from investors' reaction to General Dynamics' report last week, it wasn't something they were happy to see either.