So far this earnings season, we've regaled you with stories of how Lockheed Martin beat on earnings, and General Dynamics (NYSE:GD) at least met expectations. Northrop Grumman beat as well. And Boeing (NYSE:BA) turned in a simply superb quarter. With just one more earnings report, we can basically wrap up the second quarter for the major defense contractors and begin making some conclusions -- so let's do that.

Here's what Raytheon (NYSE:RTN), the final company reporting out of the Big 5 defense companies, had to say about its second quarter. 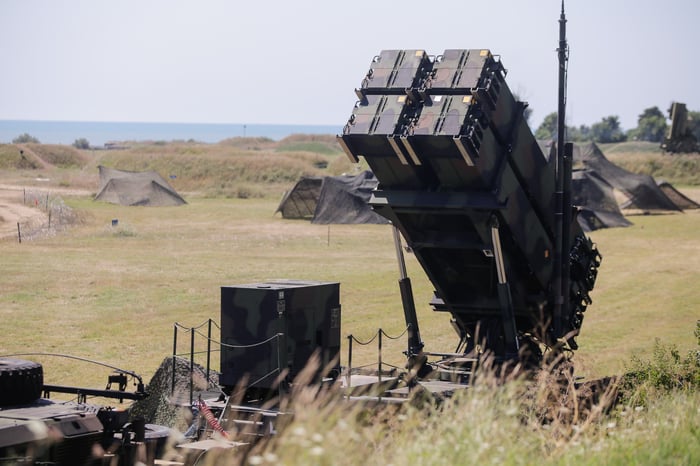 Although down year over year, Raytheon's earnings exceeded Wall Street's expected $1.74 in profits. Revenues likewise came in ahead of expectations. What's more, Raytheon noted that the declines in profitability aren't quite as bad as they look.

For one thing, last year's Q2 results were inflated by a restructuring of the company's joint venture with European defense company Thales, which yielded a tax-free $150 million gain for Raytheon. Lacking that windfall this time around, Raytheon's results naturally showed less "profit." For another, Raytheon booked a $0.09 per share charge to earnings in Q2 2017 for early retirement of debt -- not necessarily a bad thing, even if it did depress earnings a bit.

Also noteworthy is the fact that Raytheon's cashflow statement has bounced back nicely after last quarter's disappointing tally. Whereas Raytheon burned cash in Q1 2017, it generated significant free cash flow in Q2, and is now once again positive for the first half in terms of free cash flow.

What Raytheon expects to say

With these results in hand, Raytheon was able to tighten up its guidance for what the rest of this year should look like. As of today, Raytheon expects its full-year 2017 sales to range between $25.1 billion and $25.6 billion (lowering the ceiling by $200 million, while also raising the floor $200 million). Profits on these sales should be about $0.10 better than previously expected, with earnings from continuing operations running anywhere from $7.35 per share to $7.50 per share.

And with the cash flowing again, Raytheon is confident it can deliver operating cashflow of between $2.8 billion and $3.1 billion this year. Assuming capital expenditures adhere to recent trends, that should result in free cash flow of anywhere from $2.3 billion to $2.6 billion -- on part with last year, and perhaps even a bit better.

What this says about the defense industry

All of which sounds like pretty good news, and probably helps to explain why Raytheon stock is up a modest 2% since earnings day -- a better result than any of the other big defense contractors have enjoyed, barring only Boeing. (Did I mention that Boeing's earnings were really, really good?)

But there's also a bigger picture here, and it's one I think bears watching. As I've pointed out in recent columns, profit margins are at or near all-time highs pretty much across the defense industry. Boeing is currently pulling down operating profit margins of 9.6% on its airplanes, a level of profit never before seen at the Seattle planemaker. (At least, never before seen in the 27 years of data that S&P Global Market Intelligence provides on the company.) Likewise, General Dynamics, at an industry-leading 14.3% operating profit margin, is raking in unheard-of amounts of profit for every revenue dollar it collects. Northrop Grumman (NYSE:NOC), earning 13.3% margins today, has only enjoyed similar levels of full-year profitability twice in the past three decades.

Lockheed Martin (NYSE:LMT) is at 10.6% operating profit margins as it continues working to bring its F-35 program up to full-rate production. On the one hand, that means Lockheed is working on its third straight year of declining profit margins. On the other hand, Lockheed has achieved 10% or better profit margins several times in the past decade. Seems to me, as the F-35 program gains steam, Lockheed should be able to maintain and even increase its margins from where they are today.

And Raytheon? After Q2's margin drop, Raytheon has now earned operating profit margins of 13.2% on its revenues over the past 12 months. This is far above average over the company's past three decades, but more or less in line with what the company has been earning over the past three years.

So what's the upshot for all these companies? With margins already at or near peak levels, it's going to be more important than ever for the large defense contractors to keep revenues growing if they want profits to rise going forward. Margins probably cannot rise much higher, and continue to "juice" results. That said, of the five companies named above, Raytheon and Lockheed Martin are the two that have shown the most ability to at least maintain profit margins at these high levels for several years running.

While I'm of the opinion that the run-up in profits -- and stock prices -- among defense companies is just about done, if you're looking for companies with the best chance of continuing to run just a little bit further, I'd say that Lockheed and Raytheon are probably your best bets.