Please ensure Javascript is enabled for purposes of website accessibility
Log In Help Join The Motley Fool
Free Article Join Over 1 Million Premium Members And Get More In-Depth Stock Guidance and Research
By John Ballard – May 13, 2018 at 7:20AM

In the last few years, Activision Blizzard (ATVI -0.71%) has been focusing on the esports market as a way to reduce its dependency on game sales by building a sizable revenue stream from advertising, ticket sales, merchandise, and sponsorships. Overwatch League (which launched in January of this year) is the most promising of its esports ventures to date, with management making the bet that it will deliver a large enough audience to attract big bucks from advertisers.

But in order to attract advertisers -- which along with sponsorships is expected to make up 77% of the esports market this year -- there has to be verifiable data about who is watching and for how long. Nielsen Holdings' (NLSN -0.07%) TV ratings are the "currency" of media buyers. Last year, Nielsen announced a new ratings service specifically for esports and has now partnered with Activision to provide verifiable ratings for its top esports ventures, including Overwatch League and Call of Duty World League.

This could be a game-changer -- not just for Activision but the growth of esports overall. 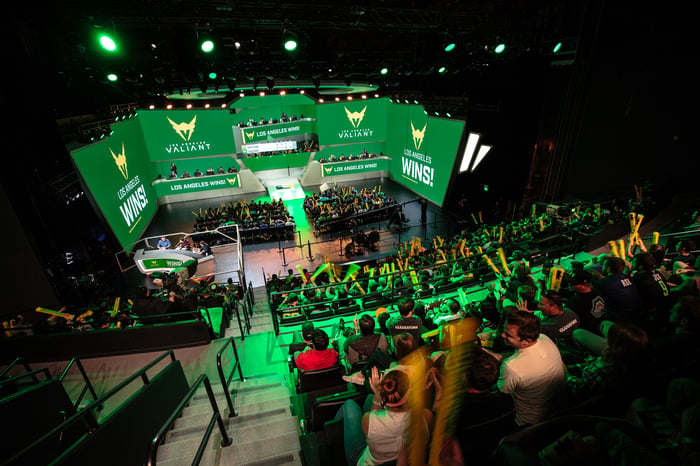 How Overwatch League stacks up to mainstream TV

Nielsen TV ratings represent the authority for determining which TV shows major brands should target to get maximum exposure and return on investment for sponsorships and ads. Without TV ratings, there's no brand investment. And without brand investment, Overwatch League will likely fizzle out.

TV ratings represent the percentage of a given population that was exposed to an ad. Some of the highest-rated TV shows -- AMC Entertainment's The Walking Dead and HBO's Game of Thrones -- generate about 10 million to 15 million views per episode on average over a season.  These top shows typically reach about 4% of the most coveted demographic of 18- to 49-year-olds, which includes millennials -- the core demographic of esports. However, most TV shows on the most-watched networks generate 1 million to 5 million viewers.

By comparison, Activision's Overwatch League has generated 280,000 daily average views for scheduled matches, which are held every week Wednesday through Saturday. Although this looks weak compared to most TV shows, keep in mind that esports is in its infancy but growing quickly. Newzoo estimates the global esports market could nearly double to $1.4 billion by 2020, and that's with an audience of more than 300 million people that is expected to grow 14% per year.

Still, why would advertisers be interested in something that only generates 280,000 views when they can simply concentrate on popular TV shows that offer much more exposure for their brands? Perhaps the more important question is why is Activision sticking its neck out and risking a weak report from Nielsen? After all, a weak report could spell doom for Overwatch League.

There's more than meets the eye

Well, that's just it. It's clear Activision executives know they have something very valuable in Overwatch League, and they have already gained the sponsorships of a handful of big brands, such as Intel, HP, Toyota Motor, T-Mobile, and Sour Patch Kids. But Activision needs more to generate enough revenue (and profit) from esports that will matter to shareholders over the long term.

The most important of those sponsorships so far is Toyota, T-Mobile, and Sour Patch Kids as those brands are non-endemic to gaming. It's expected that Activision should have no trouble picking up support from tech companies, but consumer goods brands will be trickier, and that's where Nielsen comes in.

Last year, Nielsen launched a new rating service specifically designed for esports called Esport24. It uses the same methods for measuring value and performance for traditional sports rights holders. If the one company that knows a thing or two about brand value is launching a service for esports, that says something.

Nielsen could unleash an avalanche of media buying in esports

As game companies continue investing heavily in esports, it's possible Overwatch League (and other esport events Activision may launch) will continue to grow its audience until it reaches parity with cable TV shows over the next 10 years. I doubt Overwatch League will ever be anywhere close to the 15 million weekly views of the most popular TV series, but it doesn't have to be in order to attract advertisers considering the numerous shows that get renewed each year with just 1 million viewers.

With 280,000 average views in a market that's in the baby stages of growth, Activision's Overwatch League and esports overall represent a significant opportunity -- one that will be bolstered by Nielsen's stamp of approval as it provides the data media buyers need to have confidence that their advertising dollars will be well spent. Activision Blizzard management is confident that Nielsen will deliver a solid report, and that should accelerate brand investment in Overwatch League. That's the first major step to accelerating the growth of esports overall.