Please ensure Javascript is enabled for purposes of website accessibility
Log In Help Join The Motley Fool
Free Article Join Over 1 Million Premium Members And Get More In-Depth Stock Guidance and Research
By Danny Vena – May 13, 2018 at 6:17AM

Investors looking beyond the numbers will see plenty of growth ahead for the e-commerce facilitator.

There was a lot to like in the financial results that Shopify (SHOP -1.27%) recently reported for the first quarter -- the e-commerce facilitator produced numbers that many other companies would envy. Revenue grew 68% year over year to $214 million, while its adjusted operating loss of $200,000 was a major improvement from the $4.3 million it lost in the prior-year quarter.

While the company covered all the usual metrics in its financial release, management revealed much more on their conference call with analysts about the wealth of opportunities they see going forward. Read on to find out what the executives had to say about Shopify's international opportunities, its growing list of enterprise partners, and data privacy. 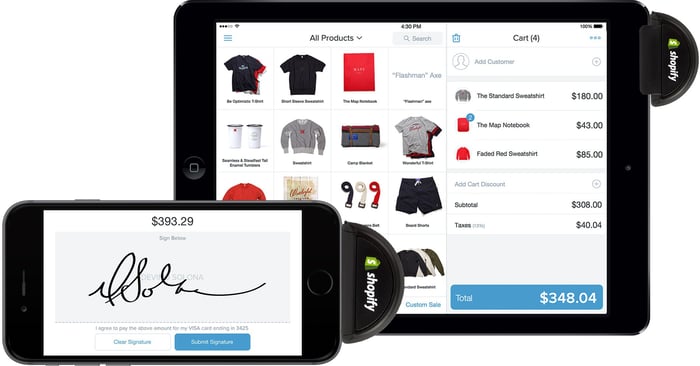 Shopify has plenty of gas left in the tank -- and a long road ahead. Image source: Shopify.

With a customer base of over 609,000 merchants in 175 countries, it might seem like Shopify has much of the world covered. But you might be surprised to know that the majority of those merchants are still located in North America, "where most orders on Shopify are shipped to and from." That tidbit was provided by Chief Operating Officer Harley Finkelstein in his remarks to analysts.

Finkelstein said company's focus over the past 12 years had "been centered on merchants in North America first." Yet its addressable market, he noted, is much larger, and said the company is embarking on a multiyear journey to make the platform as simple and effective internationally as it is in North America.

Shopify has taken numerous steps to prepare for this undertaking. The company is in the midst of a transition to a global cloud service provider, Google Cloud, a division of Alphabet. The company also plans to localize its platform in terms of language, payment methods, and currency. International merchants will increasingly be able to avail themselves of merchant solutions like Shopify Shipping and Capital.

Shopify began its life offering small- and medium-sized businesses the tools to simply and easily establish their own online stores. As time went on, many of those merchants grew into enterprise-level businesses, which led the company to develop new solutions for larger operations. The fruit of that labor was Shopify Plus, the company's enterprise segment.

This has become an area of significant growth for Shopify, and it's devoting resources to further capitalize on the opportunity. By adding  tools that are better suited to the needs of larger merchants, Shopify is enticing companies away from other enterprise e-commerce platforms. Among the household names using Shopify Plus now are Red Bull, Nestle, and Colgate-Palmolive. As the number of tools it offers that are geared toward these large corporations grows, the company expects adoption of Shopify Plus to accelerate.

Since the Cambridge Analytica data mishandling scandal was revealed, the subjects of data protection and consumer privacy have been hot-button issues in the tech world. When asked about potential changes to the environment and to its data privacy policies, CEO Tobi Lutke said:

We have very, sort of, strict principles of our own data, our own privacy, which we have internally. And ... the rest of the world is sort of coming around to our vision of how data should be handled ... and I think that's honestly really, really, really good for the Internet. So we're very happy that this is happening.

Additionally, its recent move to Google Cloud was partially prompted by "the increasing regulations around data sovereignty." As a top-ranked cloud computing service, Google uses state-of-the-art encryption for data stored on its servers. This lessens the likelihood of running afoul of diverse and complex international data laws and regulations.

Taken together, these three areas highlight the enormous opportunities and the long runway ahead of Shopify, and provide reasons to be bullish for the future.