Networking hardware company Cisco Systems (NASDAQ:CSCO) is set to report its fiscal third-quarter results after the market closes on Wednesday. Cisco returned to revenue growth in the second quarter, ending a two-year streak of slumping sales, and it expects to produce even stronger growth during the third quarter.

In the second quarter, Cisco grew revenue by 2.7% year over year to $11.9 billion. That was ahead of the average analyst estimate, and the company's strongest performance in quite some time. Cisco's push to grow recurring revenue from subscriptions has had a negative effect on revenue for the past few years, as sales were spread into the future. That headwind remains, but the company was finally able to offset it in the second quarter. 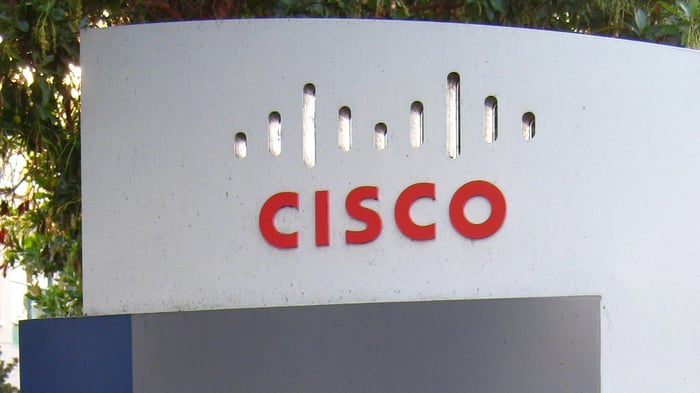 Cisco grew non-GAAP earnings per share by 10.5% year over year to $0.63, while GAAP earnings were hit by a one-time $11.1 billion charge related to the Tax Cuts and Jobs Act. The tax bill also had some positive effects. Cisco announced plans to repatriate $67 billion of off-shore funds, allowing it to add a whopping $25 billion to its share buyback program and boost its dividend by 14%. Cisco expects to exhaust that new buyback authorization within two years.

Cisco's third-quarter guidance calls for year-over-year revenue growth between 3% and 5%, a range that straddles the average analyst estimate of 4.1% growth. That estimate would put Cisco's quarterly revenue at $12.43 billion.

Cisco expects non-GAAP earnings per share between $0.64 and $0.66, up from $0.60 during the third quarter of 2017. Analysts see EPS of $0.65, right in the middle of that range. Cisco has consistently beat estimates for both revenue and earnings over the past few years, so another double-beat looks likely.

For the full fiscal year, analysts expect revenue to grow by 2.4% and non-GAAP EPS to rise by 7.9%.

Cisco has been steadily shifting toward recurring revenue over the past few years. The company's push to generate more revenue from software and services is part of that initiative. In 2015, the company said it was on track to generate $9 billion of software revenue annually, about 18% of total revenue at the time. That percentage is likely higher now.

During the second quarter, deferred revenue related to recurring software and other subscription offers rose 36% year over year. That growth rate provides a rough idea of how fast this part of Cisco is growing. This growth is coming not only from software-heavy segments, like security, but also from the core networking hardware business. Cisco's latest line of Catalyst 9000 switches are subscription-based, bundled with software. This shift away from simply selling boxes seems to be working, with CEO Chuck Robbins saying late last year that "the vast majority" of Catalyst customers were opting for the most advanced software subscription offer.

Recurring revenue accounted for 33% of total revenue during the second quarter, up 2 percentage points year over year. Expect that number to edge up further in the third quarter.

Can the stock go higher?

Shares of Cisco have surged 35% over the past year, easily beating the S&P 500, which mustered a 14% gain in the same period. Anticipation of the company's return to growth, as well as the benefits of tax reform, have played a role in driving the stock higher.

There's no telling what shares of Cisco will do immediately after the company's third-quarter report, but there's room for the stock to move higher in the long run. Despite the run-up over the past year, Cisco stock isn't that expensive. If you back out the $34.3 billion of net cash on the balance sheet, shares trade for a little less than 15 times the average analyst estimate for 2018 non-GAAP earnings. And don't forget about the 2.9% dividend yield, which is well above the middling yield offered by the S&P 500.

I've owned shares of Cisco since 2012, when the stock price was stuck in the mid-teens. It's no longer the no-brainer bargain it was a few years ago, but it's still a solid, reasonably priced dividend stock worth considering.