TransEnterix (NYSEMKT:ASXC) recently surprised investors on the upside when it reported its first-quarter results. The company's Senhance surgical system is off to a fast start right out of the gate, and it has attracted a lot of positive attention from the medical community. This just goes to show how much demand is out there for an alternative to Intuitive Surgical's (NASDAQ: ISRG) dominant da Vinci platform. 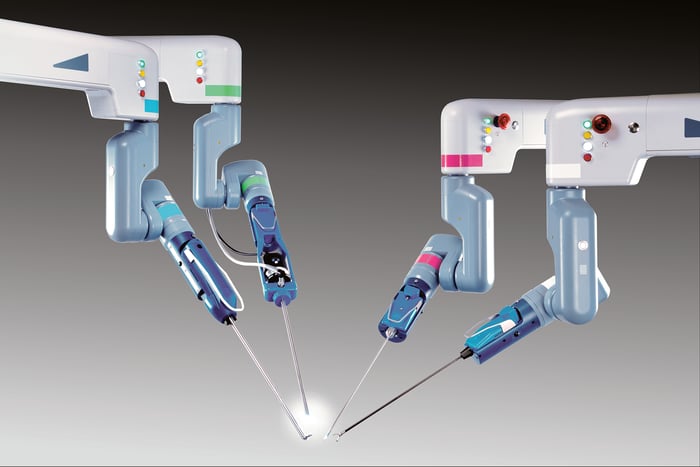 TransEnterix's management team had already told investors that it sold two systems during the first quarter. However, the big news released during the company's earnings first quarter report was that it had already sold three additional systems thus far in the second quarter. Since the second quarter was less than six weeks old at the time of the conference call, the company is currently on pace to sell at least one system per month. It's an impressive initial sales rate for robotic surgery systems, since many hospitals can take can a year (or more) to make a purchasing decision on these very expensive machines.

CEO Todd Pope stated that he was very pleased with the company's strong start and that he expects the trend to continue:

Given that we're still in the early stages of the four to six quarters sales process, we're very encouraged by these initial successes and the development of our pipeline and expect to see continued progress in the back half of 2018 and into 2019.

Overseas sales are driving the results

The U.S. is the largest healthcare system in the world, and robotic surgery in the States has long been Intuitive Surgical's stronghold. To this day, more than half of the company's 4,500 da Vinci systems in operation reside in the U.S.

That fact might lead you to conclude that TrasnEnterix's results are being driven by strong sales in the U.S. In fact, investors can thank international markets for the bulk of the company's initial orders. Both systems that were placed in the first quarter were sold in international markets. Two of the three systems that have been sold in the second quarter were also sold overseas.

Here are Pope's comments on the two recent international sales and how the company's partnerships with distributors are paying off:

Both of these systems were sold by one of our distribution partners and are expected to be delivered in the second quarter. Their understanding of the local landscape is incredibly valuable when working with the complex medical device sale into hospitals.

New markets are opening up

Management was excited to announce a big win they recently had in the United Kingdom. In the first quarter, the U.K. established a new framework process that will allow hospitals in the region to buy robotic systems and services from approved vendors without having to go through an arduous tender process. This should provide more visibility for the company in a big market:

We are pleased to announce that the Senhance has been awarded a place in this framework as one of only two existing systems for soft tissue robotics. The program, which includes all types of surgical robotics, consumables, and related services, is valued at over $400 million and runs through early 2023.

The company hasn't reported any sales in the U.K. yet, but this does set the stage for the company to break into the region soon.

Pope also commented on the call that Senhance received regulatory approval in Taiwan during the quarter, and that the company has already started the clinical work necessary to seek approval in Japan down the road.

When Senhance initially won FDA approval, management estimated that it could be used in more than more than 1.5 million procedures in the U.S. alone. That's a big opportunity in its own right, but the company filed for a label expansion claim in January seeking clearance for Senhance to be used in both laparoscopic inguinal hernia and laparoscopic gallbladder surgery.

CEO Pope believes the thumbs up on these label expansions, which should come later this year, will greatly expand the appeal of purchasing the Senhance system:

These are both high-volume procedures, traditionally performed laparoscopically and with approximately double our addressable procedure market to over 3 million procedures per year. This process continues to progress in line with our expectations for a mid-year clearance.

The company also reaffirmed that they are "on track" to seek approval for a number of product enhancements during 2018, including:

Winning the thumbs-up for any of these advances should only further enhance the company's competitive position.

The biggest knock I've had against TransEnterix is that the company has long been in a precarious financial position. Last quarter, the company's actual cash burn was $12.4 million, which is a decent sized number when compared to the company's cash balance of $87.6 million.

CFO Joseph Slattery broke down the numbers during the conference call and gave investors an updated timeline on their runway:

We continue to anticipate the cash on hand is sufficient to fund the business through 2019.

On the plus side, the share price has risen quite a bit over the past year, so if another capital raise is needed soon, then the dilution won't be quite as bad.

Is TransEnterix a buy?

I've been impressed with the Senhance launch thus far and believe that the upcoming product enhancements and geographic expansion will allow the company's momentum to continue. However, I'd personally like to see the company produce a few more quarters of progress and perform another capital raise before I consider investing in this high-risk company.