Please ensure Javascript is enabled for purposes of website accessibility
Log In Help Join The Motley Fool
Free Article Join Over 1 Million Premium Members And Get More In-Depth Stock Guidance and Research
By Asit Sharma - May 17, 2018 at 11:35AM

Here's what will tell investors whether the venerable soup maker can turn its recent fortunes around.

Campbell Soup Company (CPB 0.22%) reports its fiscal third-quarter 2018 earnings tomorrow before the opening bell. Shares of the consumer packaged goods (CPG) giant have languished over the last 12 months, losing nearly one-third of their value, as a rough environment for CPG companies, coupled with a few self-inflicted wounds, has soured investors' enthusiasm. Below, I highlight five areas investors will watch closely for signs of improvement when the company releases its report.

Last quarter, Campbell's results were impacted by lower sales with a major retail customer. This caused U.S. soup sales to decline 7% from the prior-year quarter, and led to flat total company revenue of $2.2 billion. Management had signaled issues with the customer as far back as the first quarter of fiscal 2018, when the purchaser decided to drop a regularly scheduled soup promotion. The retailer is widely reported to be none other than Walmart, Campbell's largest customer, which has supplied 20% of the company's sales in each of the last three fiscal years.

In Campbell's fiscal second-quarter earnings conference call in February, CEO Denise Morrison relayed that the company was engaging in ongoing discussions with the customer -- and making progress. Just how much progress will be evident in third-quarter numbers. There's reason for shareholders to worry over this ongoing issue, as increasingly, retailers are calling the shots with packaged foods manufacturers. This dynamic is due to the proliferation of small disruptor brands which are seeing widespread acceptance from consumers. It also reflects an growing preference by grocers for a higher mix of private-label goods on shelves, due to the high degree of current price competition in the grocery industry.

So investors will look for firmer year-over-year U.S. soup sales in the third quarter for proof that Campbell really is getting its desired promotional environment and raw real estate within Walmart's stores. 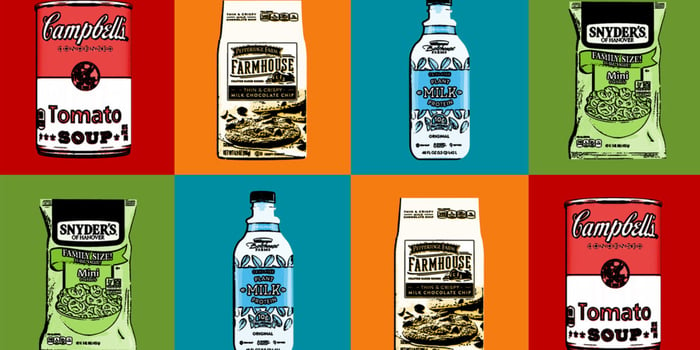 Campbell Soup's own missteps have contributed to pressure on its stock price. These have largely occurred within the Campbell Fresh segment, the division originally conceived as a faster-growing business, catering to a more contemporary, health-conscious consumer.

In 2017, the segment saw lower carrot sales, partially due to weather-driven supply issues. And in the last quarter, Campbell Fresh's super-premium beverage line encountered headwinds, as retailers cut back on the fruit-forward, sugary drinks that have led this category in the last few years.

I've written in detail recently about the vigorous new beverage launches Campbell Fresh is undertaking this year in a scramble to keep up with shifting consumer tastes. Campbell Fresh is capable of rebounding from its flat revenue profile of recent months, and might achieve a positive top line as early as this quarter.

3. Even a small amount of revenue growth would be timely

Campbell's full year fiscal 2018 outlook calls for revenue to fall between negative 1% and positive 1% growth. Sales have declined 1% so far in the first half of fiscal 2018, and this is after a positive 1% impact from last year's acquisition of organic soup maker Pacific Foods.

With two quarters already in the books, some revenue expansion in the third quarter is sorely needed if the company is to hit either a flat performance or the hoped-for 1% revenue improvement in fiscal 2018. Conversely, another revenue decline will likely mean that Campbell will hit the bottom of its projected range this year -- at best.

Campbell closed its acquisition of snacking specialist Snyder's-Lance on March 26 of this year, at a total price tag of $6.1 billion. The purchase creates a new segment that folds in Campbell's Pepperidge Farm portfolio, and has been named, in a blast of inspiration, "Campbell Snacks."

The acquisition of Snyder's-Lance creates a company with pro forma sales of over $10.1 billion, compared to Campbell Soup Company's fiscal 2017 revenue of $7.9 billion. It also transforms Campbell into a predominantly snack-based company, with 47% of pro forma sales in snacks, versus just 26% in the traditionally dominant soup business.

I believe that that investors shouldn't expect Campbell's organic growth to be suddenly supercharged from this transaction, even though the salty snacks category is one of the fastest-growing areas of the packaged foods industry. The first item of business is to integrate two companies with different sets of expertise, consumer markets, and distribution methods. During the company's post-earnings conference call this week, shareholders should expect to hear both detail on the integration plan, and hopefully, rough expectations for post-merger synergies.

5. More information on a strategic reorganization

It appears that Morrison may be grooming Mignini as a potential successor. Mignini has essentially been tasked with speeding up company execution, and pushing innovation to make Campbell more competitive. Look for comments from both executives on his priorities during the company's earnings call. Mignini has been entrusted with a vast amount of responsibility and several key portfolios, so shareholders will certainly scrutinize his performance in the coming quarters.