The defense sector enjoyed impressive gains in 2017, with most large companies outpacing the S&P 500's 19% return on the prospect of a Trump-era surge in military spending. But 2018 has been a different story so far. The industry in recent months has been stuck in neutral after a first quarter that failed to deliver on heightened expectations.

Two of the biggest laggards have been General Dynamics (NYSE:GD) and Huntington Ingalls (NYSE:HII), each down by more than 10% in the past three months. The similarities go well beyond stock performance. The companies have two of the more interesting outlooks for growth among defense players, but each seemed to catch investors off guard over how long it will take that increased business to materialize.

Here's a look at where things stand for General Dynamics and Huntington Ingalls, to determine which is the better buy today.

Shipbuilder Huntington Ingalls was seen as one of the chief beneficiaries of a Pentagon buying spree, but the bull case was called into question by first-quarter results that came in well below expectations. Shares of Huntington Ingalls plunged 8% on May 3 after earnings, and are down more than 13% in the last month. 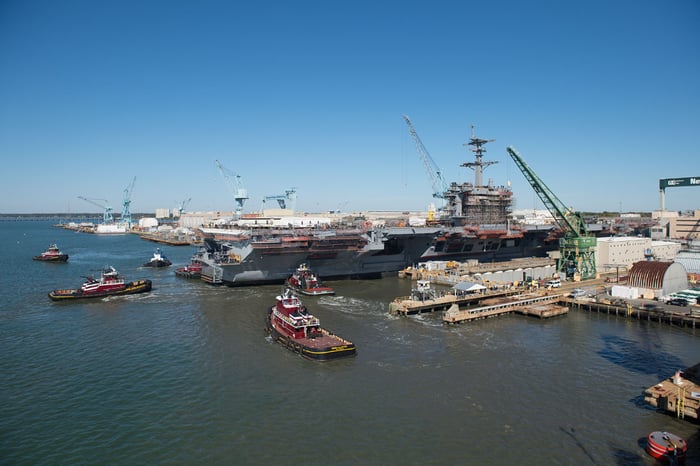 The company attributed the miss to the number of early stage contracts it has, noting that Huntington does not fully recognize construction income until the ship is delivered. CEO Mike Petters on a call with analysts noted that the company's order book is the healthiest he has seen it, saying "frankly, this is the most exciting shipbuilding environment in over 30 years."

The long-term outlook for Huntington continues to improve. The fiscal 2019 defense authorization bill passed by the House Armed Services Committee last week provided plenty of good news for the shipbuilders. The budget would authorize a two-carrier block buy, fulfilling a longtime Huntington Ingalls request that the company said would save both it and the government money through bulk materials purchases and lower labor costs.

At quarter's end, Huntington Ingalls had about 25 ships under contract. The company sees the potential to add 20 to 30 additional ships by the end of 2020.

The House is also interested in extending the service life of the USS Nimitz, the oldest carrier in the fleet, asking the Navy for a report on how much it would cost to modernize some of the vessel's key components. That could be a cost-effective way to increase the size of the fleet, a Pentagon goal, while adding upwards of $5 billion in additional revenue for Huntington.

There is also increased money in the budget to build more Virginia-class submarines. The spending plan must still get through the Senate and receive White House approval, but the carrier requests appear increasingly likely to be granted, and with broad support for strengthening the armed forces, other major House increases are unlikely to be drastically scaled back.

General Dynamics, a manufacturer of a range of weapons systems and one of the top government IT vendors, also received some additional upside from the House appropriations process. The company is the other major Pentagon shipbuilder, along with Huntington Ingalls, and should also benefit from the increase in submarine orders. There was also an extra $300 million for its Stryker ground vehicles.

What hasn't been working for General Dynamics is its Gulfstream business jet unit, which has never recovered from the 2008-2009 recession. Global sales of business jets are less than half of what they were in 2008, though General Dynamics provided reason for hope in January when it announced that Gulfstream net orders had climbed 20% year over year. 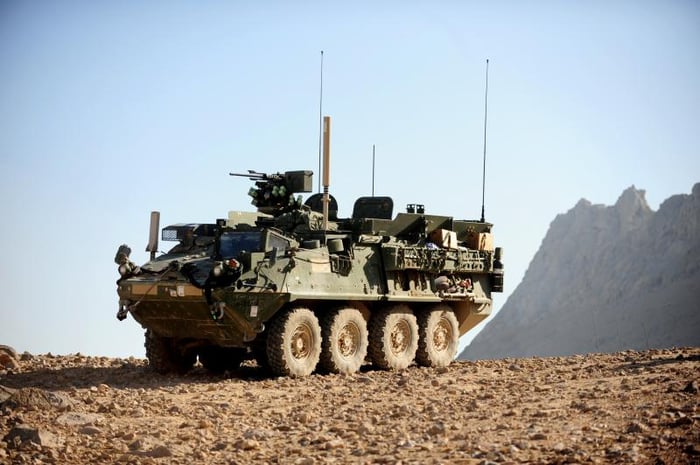 First-quarter results tempered that optimism, with General Dynamics reporting a book-to-bill ratio for its aerospace unit of 0.77, down from 1.3 in the fourth quarter of 2017. Gulfstream also delayed initial deliveries of its highly anticipated G500 midsize jet from the current quarter to the last four months of the year, denting hopes of a near-term recovery.

It's worth noting that the first quarter is traditionally the weakest for Gulfstream, and the company insists that interest in the new planes is strong. The General Aviation Manufacturing Association predicts demand for business jets would grow by more than 2% annually over the next 10 years, with a near-term spike possible thanks to changes in the U.S. tax law, which would speed depreciation and incent customers to replace aging corporate fleets.

General Dynamics is also in the process of integrating its $9.6 billion acquisition of CSRA, a deal that more than doubled its government IT presence at a time when federal demand for IT services is expected to surge. The CSRA business is currently involved in a number of large contract competitions, most notably a series of bids as part of the Army's $13.77 billion Warfighter Focus program, which, if successful, could move the needle in the quarters to come.

Go with the general

General Dynamics does trade at a slightly higher valuation than Huntington Ingalls, but the company still lags arguably more-comparable rivals Raytheon (30.21 price-to-earnings, 2.38 price-to-sales) and Northrop Grumman (26.56 P/E, 2.13 P/S). Huntington Ingalls has traditionally traded at a discount since it is reliant on a single branch of the U.S. military for most of its revenue. However, for the next few years, a focus on the Navy should serve the company well.

Gulfstream is largely responsible for General Dynamics' discount to Raytheon and Northrop, and should the business jet unit stabilize, expect the gap to close quickly. A Gulfstream recovery in the quarters to come still seems a good bet, even it hasn't materialized as quickly as some, myself included, had hoped.

If nothing else, Gulfstream's potential and looming IT awards give General Dynamics multiple ways to beat expectations, a rarity in a business with drawn-out and highly telegraphed product competitions and multiyear procurement cycles.

General Dynamics and Huntington Ingalls are two good companies that could each outperform the defense sector over the next year, but right now General Dynamics is a better buy.