General Motors (NYSE:GM) has gone through a lot over the past 10 years. After suffering during the recession of 2008 and eventually filing for bankruptcy protection, GM was able to get its financial house in order and take advantage of one of the most prosperous periods in auto industry history during the early and mid-2010s. Competitive victories over some of its most important rivals followed, and General Motors looks a lot healthier financially than it has throughout much of its history.

More recently, investors haven't been entirely sure what's in GM's immediate future. The auto industry is notoriously cyclical, and after several years of record sales, some wonder whether General Motors is due for a cooldown. Yet that negative sentiment has been around for a while now without industry conditions deteriorating to nearly the extent that some had expected, and a closer look is necessary to see whether GM is a good buy for investors right now. 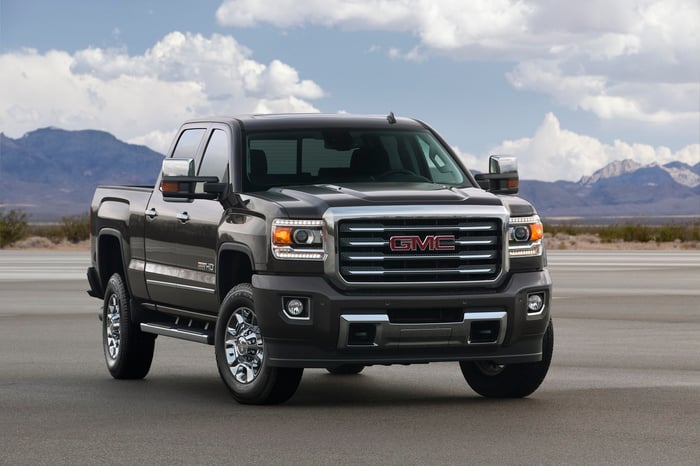 A masterful performance from GM

General Motors has always been good at gauging the appetites of consumers, and those efforts show up clearly in its financial results. After dipping in 2013 and 2014, GM's profitability spiked higher in 2015 and 2016, roughly doubling from its run rate in the previous two years. 2017 profits disappeared largely due to one-time impacts from the U.S. tax reform bill, but operating income reached its highest level in the 2010s last year.

Looking more closely at GM's sales mix, the key to its success was managing changes in consumer preferences effectively. Overall, U.S. sales volumes fell 1.3% during 2017 from the previous year, but most of those declines came from planned contractions in sales to rental-car fleets, which have historically had relatively weak profit margin associated with them. Although demand for its sedan vehicles fell sharply, GM was able to drive sales of its crossover sport-utility vehicles to impressive gains and mostly offset weakness elsewhere. General Motors has also seen strength in its pickup category, making progress against its main rival in the U.S. market in that key segment, and electric vehicle sales hit all-time record levels as well.

General Motors still has to deal with the capital requirements of the auto industry, and that requires plenty of reinvestment into its business. Even after coming out of bankruptcy, GM wasn't able to get rid of debt entirely, and the automaker has seen its long-term debt levels rise gradually in recent years. Much of that debt is attributable to its finance division, but even on the operating side of the business, debt levels more than tripled from 2012 to 2017.

Yet there's still reason not to worry. GM has cash and short-term investments adding up to more than $17 billion right now, against less than $12 billion in long-term operating debt. Cash has trended downward even as debt has risen, but at least for the foreseeable future, it looks unlikely that General Motors will find itself in a liquidity crisis of the sort that proved so devastating during the 2008 recession.

General Motors shares sport a valuation that's hard to beat. Tax-reform impacts have made GM's trailing earnings multiples meaningless, but when you incorporate near-term profit expectations, the stock trades at less than six times forward earnings estimates. That's not an unusual state of affairs in a deeply cyclical industry like automobile production, because a decline in demand or rising costs can quickly crush earnings and thereby boost valuations based on bottom-line metrics rapidly.

Yet GM is highly optimistic about its future. The company actually sees 2018 holding up quite well compared to 2017 earnings after adjusting for tax impacts, and 2019 could be even stronger. By more aggressively promoting its production cycle, coming out with attractive new models, and working to keep costs contained, General Motors does have the ability to keep its bottom line growing even if it's already seen the best part of the current growth cycle in the auto industry more broadly.

GM obviously couldn't pay a dividend when it was in bankruptcy, but it's come back to reward shareholders more extensively now. The stock carries a huge dividend yield of more than 4%, double what the overall market is offering right now.

Some fear that the next downturn could lead General Motors to cut its dividend. It's true that automakers have made dividend cuts at times when economic conditions became less favorable. Yet right now, GM pays out only about a quarter of its adjusted profit, and that gives the company a nice margin of safety. Even if earnings do contract at some point in the future, there won't be too much pressure on the modest dividend that the automaker's paying right now.

General Motors has a lot of attractive qualities that go into a smart stock purchase, including cheap valuations, dividend income, and solid growth prospects. No matter what the economic picture brings in the years to come, the risk-reward proposition at GM looks favorable right now, and investors would do well to pay attention before their peers see the opportunity.