I dusted off my crystal ball earlier this year and made three (I thought not very) bold predictions about what investors could expect from Tesla (NASDAQ:TSLA) stock in 2018. As we approach the midpoint mark of the year, however, it looks like I'm batting only .333:

But my third prediction? The one about Tesla expanding its energy storage business in 2018? That prediction is playing out like crazy. 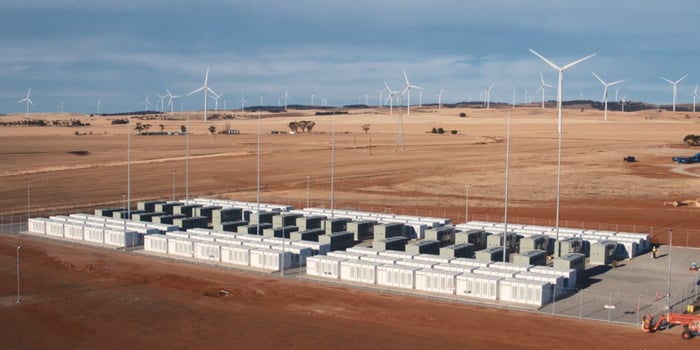 Growth from down under

The signal event signaling Tesla's energy storage ambitions took place last year. Elon Musk basically bet Australian billionaire Mike Cannon-Brookes $50 million that Tesla could build a 129-megawatt (MW) battery system to backstop South Australia's electric grid in under 100 days -- and he won that bet. A few months later, Musk parlayed this success into an even bigger project to build a separate, 250 MW "virtual power plant" comprising both solar panels and battery storage for their electricity, which could net Tesla as much as $800 million (Australian) in sales through completion.

Now Tesla's backup battery farms are sprouting up like mushrooms.

For example, last week, Tesla announced on Twitter that it's just completed an 18.2 MW Powerpack energy storage project in Belgium, designed for "balancing the European electrical grid" to cope with power outages.

This followed the announcement of additional Australian projects, including one funded by the Australian Renewable Energy Agency and the Victorian government to build a 25 MW energy storage system for energy generated by the Gannawarra Solar Farm near Kerang, Victoria, and a separate 20 MW battery farm located at the Bulgana Green Power Hub wind farm in Western Victoria.

Other energy storage projects in the works or recently completed have been announced in the Philippines (2 MW installed to prevent power outages in the city of Paluan), New York (4 MW being planned for Orange and Rockland Utilities), Massachusetts (48 MWh under way for National Grid in Nantucket), Canada (with Nova Scotia Power), and Puerto Rico (a solar and battery project providing power to a children's hospital in San Juan).

All of these energy storage projects have one thing in common: They're based on the Tesla Powerpack, a supersize, utility-scale version of the company's Powerwall batteries for home users. Each Powerpack contains 16 battery "pods," housed within an all-weather enclosure that can sit right out in the open -- no building required. Each Powerpack can store approximately 100 kW of "green energy," charging up when the sun is shining or the wind is blowing and then releasing it into the grid when demand is peaking, or to head off a looming blackout.

Musk also alluded on Tesla's recent earnings conference call to a potential gigawatt-scale battery warehouse, predicting, "I feel confident that we'll be able to announce a deal at the gigawatt-hour scale within a matter of months." Musk did not name Tesla's counterparty, but the language he used suggests he has a specific project in mind, and that negotiations are already under way. If and when it's announced, the project would dwarf Tesla's biggest project to date (the Australian virtual power plant) by a factor of four, and Tesla's marquee South Australian project by nearly eight times.

How significant is the battery business to Tesla?

Tesla reportedly built the South Australian battery project for $50 million. Assuming (for the sake of simplicity) relative parity in the cost of storage projects per megawatt around the globe, the upcoming 1 GW deal could be worth $200 million in revenue to Tesla, with the smaller projects bringing in a few millions apiece.

As part of Tesla's Energy Generation and Storage Segment, even Tesla's limited work in power storage to date is already contributing meaningful revenue -- and at gross profit margins (21.7% for full-year 2017) superior to what Tesla generates in its better-known automotive division (18.6%). The faster this business grows, the closer Tesla as a whole will come to turning profitable.

With analysts still expecting Tesla to turn pro forma profitable by next year, the faster Tesla can get its energy storage projects built, the better.