Please ensure Javascript is enabled for purposes of website accessibility
Log In Help Join The Motley Fool
Free Article Join Over 1 Million Premium Members And Get More In-Depth Stock Guidance and Research
By Jim Crumly – May 21, 2018 at 4:52PM

As stocks rose on easing worries over trade, General Electric announced it is selling its rail business to Wabtec, and Micron Technology raised guidance. 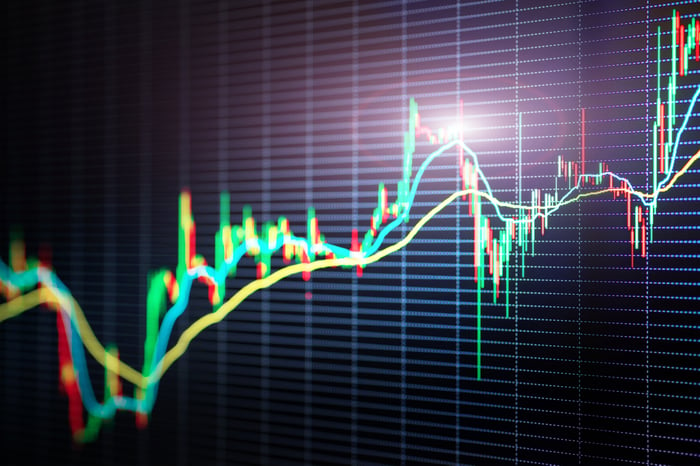 General Electric announced that it is merging its railroad unit with Wabtec in a deal worth $10 billion net of tax benefits. The spin-off, the first of what is likely to be several portfolio moves by GE CEO John Flannery as he works to transform the struggling industrial icon, was welcomed by investors of both companies, with GE stock rising 1.9% and Wabtec up 3.5%.

GE will receive $2.9 billion in cash and the company will retain 9.9% ownership of the merged entity, with GE shareholders getting 40.2%. The remaining 49.9% will be owned by Wabtec shareholders. According to the joint press release, the new Wabtec will have approximately $8 billion in annual revenue, roughly double the company's sales last year.

GE's rail business has been a drag on the company's performance but has shown signs of improvement recently. In 2017, revenue dropped 11% to $4.2 billion and profit plunged 23%, but orders increased 51%. In Q1 this year, orders were up 46% as the company sold 342 locomotives compared with 37 in the period a year earlier. GE believes the unit is ready for a rebound, with estimated adjusted EBITDA growing from about $750 million in 2018 to between $900 million and $1 billion in 2019.

Wabtec, for its part, has been firing on all cylinders. The company expects the additional scale and cost savings of $250 million per year will lead to faster growth and expanding margins.

Shares of Micron Technology rose 3.9% after the memory specialist raised guidance for its fiscal third quarter in advance of its analyst and investor event later in the day. Revenue for the quarter ending May 31 is now expected to be between $7.7 billion and $7.8 billion, up from the previous forecast of $7.2 billion to $7.6 billion. EPS guidance was raised 11% at the midpoint to a new range of $3.12 to $3.16. Analysts had been expecting the company to earn $2.84 per share on sales of $7.5 billion.

Micron said healthy industry fundamentals were driving demand for the company's DRAM and NAND memory. In presentations in the company's investor event, Micron officials highlighted the long-term trends that are fueling increased demand for computer memory, such as artificial intelligence, cloud computing, and the Internet of Things. The latest guidance represents a 39% increase in sales due to strong demand and rising memory prices.

Investors are starting to worry about the computer memory pricing cycle, though, and Micron's last quarterly report led to a decline in the stock price the next day despite similarly strong results. Industry observers such as Gartner expect that additional industry production capacity coming on line will turn the shortage-driven boom cycle into a bust for memory prices by late 2019, leading analysts to forecast a decline in Micron's revenue next year.

Micron CEO Sanjay Mehrotra argued in his presentation, however, that accelerating capital expenditure requirements in the industry will keep supply and demand in balance going forward. For today, investors were willing to set aside worries and celebrate this quarter's success.