Please ensure Javascript is enabled for purposes of website accessibility
Log In Help Join The Motley Fool
Free Article Join Over 1 Million Premium Members And Get More In-Depth Stock Guidance and Research
By Brian Stoffel - May 22, 2018 at 8:47AM

Here's why you should still be wary, even after a 90% sell-off.

Few investors have had as rough a three-year stretch than those invested in action-camera maker GoPro (GPRO -0.08%). After peaking in August 2015, shares have lost 90% of their value.

With the company showing some signs of life lately -- shares popped in early May on better-than-expected camera sales and belt-tightening cost controls -- does that mean the stock is now a "buy"? 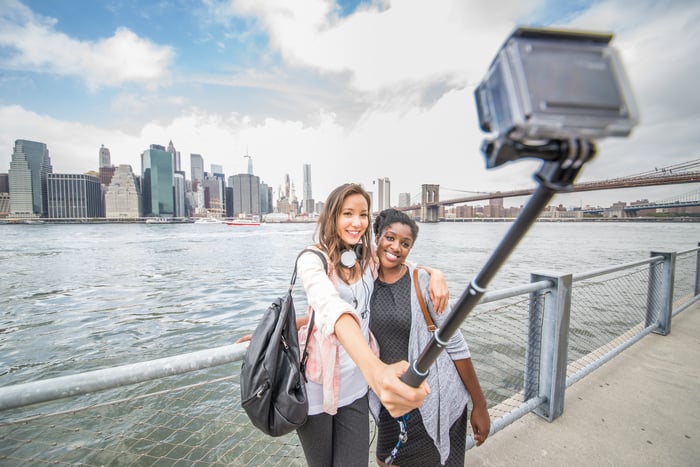 I still think the company's worst days are ahead of it. Here's why:

Perhaps nothing else tells the story of how poorly GoPro has been doing than the company's deteriorating balance sheet and cash flow statement. Currently, the company has $145 million in cash and investments on hand, versus $132 million in long-term debt. That's a net cash position of $13 million. It has also burned through $21 million in free cash flow over the past 12 months.

On the surface, that doesn't seem encouraging, but it also doesn't appear fatal. When we put those numbers in the context of the past few years, the picture gets decidedly worse. 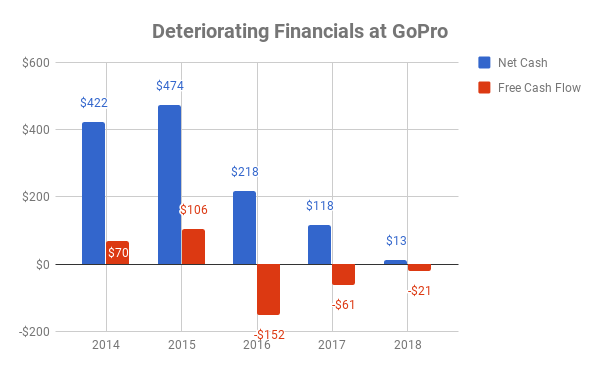 While it's good to see the company's free cash flow bleed slowing down, that has just as much -- if not more -- to do with tighter inventory control and cost cutting than it does increased sales. As it stands, there's only so much cost-cutting that can happen before the company will need to start turning a meaningful profit to justify buying shares.

Morale appears to be extremely low

Next, we have a softer variable: employee morale. GoPro was once an exemplar in this respect. When I bought shares in September 2015 (I no longer own them), the company had some pretty stellar figures on employee-review site Glassdoor.com.

But times have changed. The aforementioned cost-control measures have not only narrowed the company's scope, but also led to mass layoffs. That, combined with sales that just can't seem to match the numbers of years past (more on that below), have combined to make the picture much different on Glassdoor today.

While there's nothing preventing the company from staging a turn-around, I don't want to put my money into an organization with such low morale.

Product launches have been wildly unsuccessful

When GoPro went public in 2014, it not only owned the market for smaller action-cameras, it was the company that pioneered the market's creation. It seemed like whatever product the company put out, consumers were gobbling it up like hot-cakes.

But that all started to change in 2015 with the release of the Hero Session 4 camera. The product didn't match what consumers were looking for and had to be marked down a number of times to just move them off the shelves. Not only did that mean disappointing sales figures, but a huge drag from bloated and unusable inventory.

A similar scenario played out during the 2017 holiday season as prices had to be cut once again, even though Woodman said he was trying to keep supply low to avoid inventory risk.

But perhaps the most frustrating product launch came from the company's Karma drone. After the launch date kept being delayed, the end product was completely underwhelming. As fellow Fool Leo Sun detailed earlier this year, the Karma was priced too high, rushed to market, and didn't have a clear strategy in helping the company's overall product family.

But even if all three of these aforementioned reasons didn't exist -- if the company's balance sheet was stellar, it's workforce was happy, and the product launches were great -- I would still have my doubts. That's because I simply don't see a meaningful moat surrounding GoPro.

Action cameras are quickly becoming commoditized: Given enough time and money, any technology company can design its own camera. When competition heats up, prices drop until there are only razor-thin margins. There's nothing tying a consumer to the company when the next camera is purchased.

Back when I bought shares, part of it was based on the theory that GoPro could become a media company while monetizing the video shot on its devices. It closed that unit in 2016 and there's little reason for me to believe GoPro will have a meaningful moat anytime soon.

When you combine these forces -- lack of a moat, poor product launches, low morale, and a deteriorating balance sheet -- you aren't left with a recipe for long-term success, no matter how much a stock has fallen. That's why I think there are better places for your investment dollars, and why GoPro has an uunderperformrating on my own CAPS profile.