Please ensure Javascript is enabled for purposes of website accessibility
Log In Help Join The Motley Fool
Free Article Join Over 1 Million Premium Members And Get More In-Depth Stock Guidance and Research
By Anders Bylund - Updated May 23, 2018 at 4:23PM

Knee-deep in a dramatic turnaround based on "battle royale" gamers buying lots of headsets, the volatile computer sound specialist jumped on nearly no news at all today.

Shares of Turtle Beach (HEAR -0.99%) jumped as much as 14.2% higher on Wednesday. Investors responded to the sound card and gaming headset maker reshuffling its balance sheet. Turtle Beach's stock ended the day 13.3% above Tuesday's closing prices.

$19.3 million of preferred stock in a Turtle Beach subsidiary was retired near the end of April, removing that liability from Turtle Beach's accounts at a 50% discount. The actual transaction happened a month ago, but Turtle Beach hadn't provided full details on the deal until now. 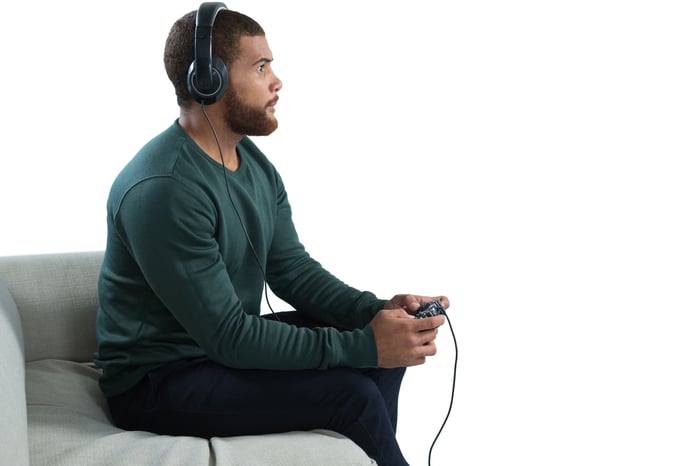 This is a pretty extreme turnaround story. Turtle Beach was on the verge of being delisted from the NASDAQ exchange for several months, as the stock price had fallen below the required price of $1 per share for more than 30 consecutive days in early November 2017. The stock regained compliance with Nasdaq's listing rules in April, right around the time when the preferred shares were retired.

"We expect the Battle Royale format to have lasting appeal and not be a short-lived phenomenon due to the style of the games and the addition of new participants into gaming," said Turtle Beach CEO Juergen Stark in a conference call with analysts.

If he's right, Turtle Beach will do fine for years to come. If not, these crazy stock-chart spikes could be temporary. Volatility is the name of the game, here -- it took no more than an announcement of financial jockeying to move share prices more than 10% higher today, though the company only saved $20 million. I wouldn't bet the farm on Turtle Beach quite yet.