Please ensure Javascript is enabled for purposes of website accessibility
Log In Help Join The Motley Fool
Free Article Join Over 1 Million Premium Members And Get More In-Depth Stock Guidance and Research
By Joe Tenebruso – May 24, 2018 at 5:33AM

More pain may lie ahead for this struggling food titan.

General Mills (GIS -1.99%) has shed a quarter of its value in the last year, as shifting consumer trends have taken a toll on the packaged foods giant. Yet the sell-off in General Mills' stock may not be over. Here are seven reasons why.

People just aren't eating their Lucky Charms like they used to.

With many time-strapped consumers turning to alternatives such as protein bars and on-the-go breakfast sandwiches sold by the likes of Starbucks and McDonald's, there's simply less demand for traditional breakfast cereals.

Moreover, many health-conscious consumers are shifting their diets toward fresher, more natural foods. Popular eating plans such as the paleo diet are steering people away from cereal and other processed foods, which tend to contain more sugar -- and are therefore more likely to contribute to obesity -- as well as artificial ingredients, which many consumers wish to avoid. Unfortunately for General Mills, cereal and other highly refined foods still comprise the core of its product lineup. The company is thus steadily losing relevance as consumers shift toward healthier eating habits. 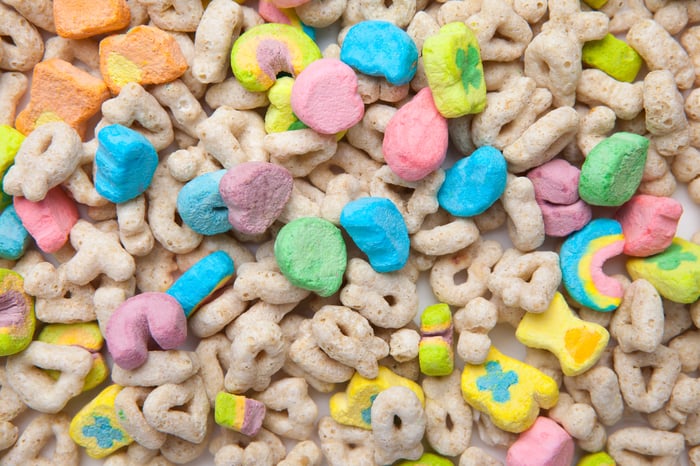 Many of those who do continue to eat cereal and other packaged foods are turning to less expensive private-label brands offered by supermarket and discount chains. With their inherent cost advantages, private-label brands offer savings to consumers and higher profits for retailers -- both of which make these products increasingly formidable competitors to General Mills' brands.

At the same time, e-commerce has made it easier for smaller brands to compete with giants like General Mills. In-store shelf space now provides less of an economic moat than it did in the past, as e-commerce allows these upstarts to go direct to the consumer via online channels.

The retail apocalypse is also taking a toll on General Mills' business. As weaker retailers fall by the wayside, the remaining survivors are gaining negotiating leverage over their suppliers, including food manufacturers like General Mills. And as the industry continues to consolidate around the retail titans -- namely Walmart, Costco, and now Amazon after its purchase of Whole Foods -- General Mills' profit margins are likely to remain under pressure from its distributors.

Worse still, cost inflation is further denting General Mills' profits. The prices of many of the raw materials the company uses in its products -- including many grains, fruits, and nuts -- are increasing and eating into its margins. This is a trend that's expected to continue; General Mills recently lowered its full-year earnings forecast due to higher expected commodity and freight costs.

This margin erosion could be mitigated if General Mills was able to pass its higher costs on to consumers. Unfortunately, many of the company's brands are losing their prestige, particularly among millennials. This limits General Mills' ability to command premium prices for its goods.

Additionally, comparing prices has never been easier, thanks to the prevalence of mobile devices. So it's becoming more difficult for General Mills to charge significantly more than its competitors.

General Mills is aware of these trends, and management is trying its best to adapt to them. The company acquired organic food company Annie's Homegrown for $820 million in 2014 and recently purchased Blue Buffalo Pet Products for $8 billion in cash and stock. But these deals were expensive, and many investors believe General Mills paid too steep a price for Blue Buffalo in particular. Moreover, these acquisitions generate a relatively small part of General Mills' revenue, making them unlikely to offset declines in other areas of its business.

Another reason to consider selling General Mills is the prospect of higher interest rates. After years of historically low rates, the Federal Reserve has begun stepping up the federal funds target rate, and more raises are expected in the year ahead. This can serve to lower demand for dividend-paying stocks, as bonds and other fixed-income investments become relatively more attractive.

Furthermore, after its acquisition of Blue Buffalo, General Mills now has more than $14 billion in debt. If rates rise, General Mills may be forced to pay more in interest payments, which could place further pressure on its profits.

General Mills investors need to understand that all of these factors could weigh on the company's future. Without strategic solutions to address some of the negative trends that the food giant faces, General Mills could suffer further share-price deterioration beyond what it's already had to deal with.