The Superchargers, the thinking goes, give Tesla owners the ability to drive anywhere, just as they could with an internal-combustion vehicle, while drivers of other electric vehicles are stuck using chargers that are usually much slower, and often hard to find.

It's true that the Supercharger network has helped Tesla convince lots of customers to "go electric." But it's also true that there's nothing stopping the big automakers from building their own fast-charging network.

That's now happening in Europe, and it's a model for how a network could be built in the United States as well. 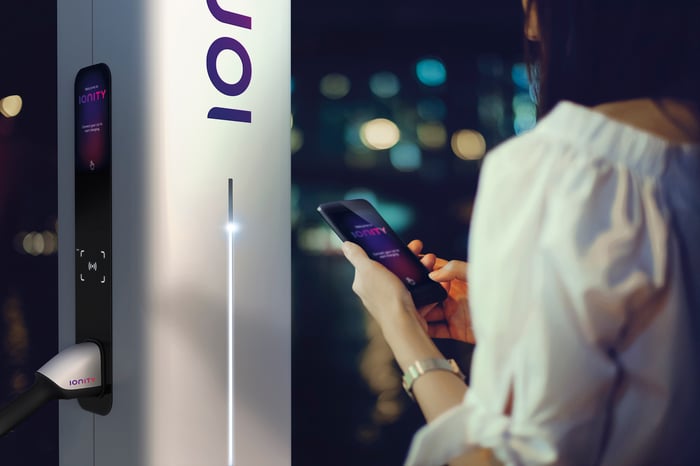 Ionity, a German company formed late last year, has begun the process of building a network of fast-charging stations across Europe. It's a joint venture between Ford Motor Company (NYSE:F), Mercedes-Benz parent Daimler AG (OTC:DDAI.F), BMW AG (OTC:BAMXF), and Volkswagen AG (OTC:VWAGY) together with its subsidiaries Porsche and Audi.

Those four automakers together accounted for about 47% of the vehicles sold in Europe in 2017 -- and a much larger share of the upscale and luxury markets in the region.

Ionity plans to build about 400 high-speed fast-charging stations along European highways by the end of 2020. The stations will be about 120 kilometers (roughly 75 miles) apart, close enough to support even shorter-range electric vehicles. (For comparison, Tesla's site currently lists 394 Supercharger stations in Europe, and another 159 "coming soon.")

Ionity's stations will use the CCS (Combined Charging System) DC Fast standard, which has become the default charging standard for most automakers (other than Tesla) in Europe and the United States. (Its principal rival is the ChaDeMo standard used by Japanese automakers, including Nissan.)

Ionity's stations will support charging capacity up to 350 kilowatts, very fast and more than any current vehicle can use. The intent is to make it high enough to support most vehicles under development or likely to be introduced in the future. (Ionity is branding its ultra-fast CCS chargers as "High-Power Charging," or HPC.)

This isn't just a hypothetical plan. Ionity has already secured sites in 19 European countries, and it opened its first station in Germany in April. It plans to have about 100 stations operational by the end of this year. The stations designed by Designworks feature distinctive branding and chargers that aim to make them as easily recognized by drivers as gas stations are now.

Ionity's chargers won't be free to use (though chargers at its first station in Germany are free until the end of May.) But Tesla's aren't really "free" anymore, either.

When they were first introduced, Superchargers were free for Tesla owners to use with no limits, but the company has gradually changed that. Right now, Model S and Model X owners get 400 kilowatt-hours (kWh) of free charging a year, which Tesla says is enough to drive about 1,000 miles. Above that limit, there's now a fee, although Electrek reported that Tesla waived it for many Model S and Model X owners in 2017, and it may be waived permanently for owners who used a referral code to buy their cars.

Model 3 owners always pay a fee to use the Superchargers.

Why are these automakers backing Ionity?

All six (counting the VW subsidiaries) have significant electric-vehicle development programs under way now. The thinking behind the joint venture is that European consumers are likely to readily adopt electric vehicles once they're available in significant numbers -- if the infrastructure to support them exists. Fuel prices are high in Europe, and public concern about pollution from internal-combustion engines has been rising in the wake of VW's diesel-emissions cheating scandal.

Ionity and the automakers backing it all say that they will welcome other automakers who wish to invest in the venture. Ionity has said clearly that its stations will be brand-agnostic.

Even Teslas can use them, if and when Tesla makes a CCS adapter available. Ionity is giving its stations a distinctive look, in hopes of establishing a widely known brand. Image source: Ionity.

Could something like Ionity work in the United States?

Ionity is clearly a serious, credible, and well-funded effort. With roughly 400 stations planned, its network will be about the same size that Tesla's is today, and sufficient to support road trips throughout much of Europe.

What about the United States? While several private companies are working to build high-speed charging stations here, including one funded by Volkswagen as a condition of its Dieselgate settlement, a joint venture funded by automakers would give the effort a major boost. If and when the United States looks ripe for widespread electric-vehicle adoption -- which it arguably doesn't under the current administration -- it's very possible we'll see something similar here.

The upshot: The Superchargers won't be a moat for Tesla

Here's the big takeaway, for investors in Tesla and other electric-vehicle efforts: While Tesla's Supercharger network gives the company an advantage now, it's not a moat -- and at least in Europe, efforts to create a viable rival network are already well under way.