Please ensure Javascript is enabled for purposes of website accessibility
Log In Help Join The Motley Fool
Free Article Join Over 1 Million Premium Members And Get More In-Depth Stock Guidance and Research
By Jason Hall, Chuck Saletta, and George Budwell - May 25, 2018 at 6:16AM

Not only do these three stocks pay you more, but these investors think they have better prospects, too.

International oil and gas behemoth ExxonMobil Corporation (XOM 2.89%) has quite a track record with dividends. Over the past 30 years, the company has increased its dividend by 629%, and in more recent years, has made it a priority to give its shareholders a raise every year. Making it even more attractive for a lot of dividend seekers is that the yield is now over 3.8% at recent prices.

Unfortunately, that high yield is as much a product of a falling share price as dividend increases. Its stock price is down 21% from the five-year peak, and more recently the company reported a surprising event: Its oil production actually declined in the first quarter. And while the biggest of big oil has a plan to drive long-term growth, there are legitimate questions as to whether its best days are in the past now and if investors would be better off looking elsewhere.

Whether ExxonMobil can rebound or not isn't a question we will try to answer in this space today. Instead, here are three dividend stocks with higher yields -- and what these Motley Fool investors think are better prospects -- than ExxonMobil: Bladex (BLX 1.93%), Enbridge Inc. (USA) (ENB 0.91%), and GlaxoSmithKline plc (ADR) (GSK -6.71%). 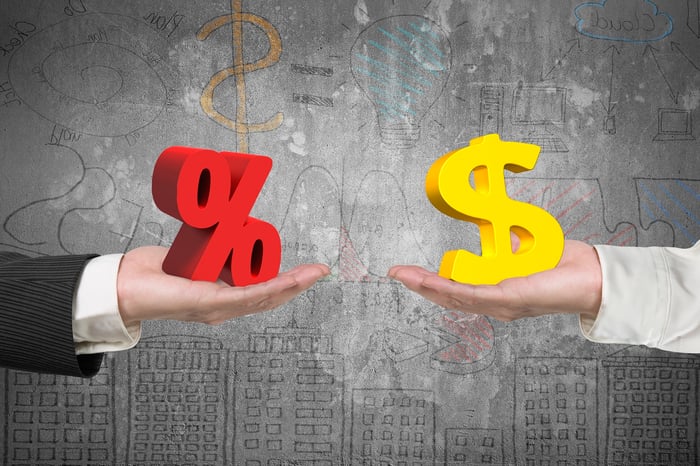 Banking on a solid risk-reward profile 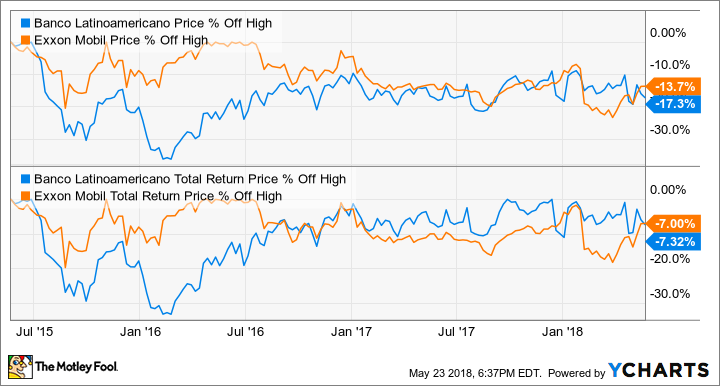 To add insult to the injury of losses investors have suffered, the S&P 500 has produced 37% in total returns over the same period. That's good for some 45% in missed-out potential gains versus the stock market's average returns, even with a dividend that has consistently yielded well above 5% over that entire period.

But I think there's a reasonable chance that Bladex can break out of that slump, which has been as much a product of huge economic woes in some of its biggest markets, including Venezuela and Brazil, as anything the bank itself has caused. To the contrary, Bladex management is focused intently on keeping its risks in check and not becoming overexposed to potentially bad loans simply to reach quarterly numbers.

The short-term pain hasn't been much fun, with it only reporting asset growth in two of the past eight quarters. By emphasizing lending quality over quantity, Bladex is smartly avoiding the pitfalls of weak economic environments suffered by many banks. This should make for a stronger bank when its lending growth recovers, which management has a plan to spur. In the meantime, investors can buy a solid bank for a solid value at 1 times tangible book value and less than 15 times trailing earnings, while collecting a dependable dividend yield of 5.6% at recent prices.

Chuck Saletta (Enbridge): Energy production and distribution are both very capital-intensive businesses. A key difference between the two, however, is that the production side of the business is very exposed to the price that the energy fetches from its consumers, while the distribution side is much less affected. That more stable cash flow enables pipeline operators like Enbridge to pay out higher distribution yields than production-focused energy companies like ExxonMobil.

Indeed, Enbridge's current yield is around 6.3%, easily outpacing ExxonMobil's 3.8% yield. In addition, Enbridge was able to hike its payment by about 10% this year, continuing a trend of annual increases going back over two decades. The ability to pay out -- and regularly boost -- a significant dividend is a hallmark of a business with strong, largely predictable cash flows.

One reason why Enbridge can be so confident in its cash flows is the fact that many of its contracts include "take-or-pay" provisions. Take-or-pay provisions require its customers to pay for their reservation of Enbridge's capacity, whether or not they actually use it. Since those customers have to pay for the service no matter what, it provides a high level of certainty, which helps support Enbridge's shareholder distributions.

George Budwell (GlaxoSmithKline): Britain's largest biopharmaceutical company GlaxoSmithKline also just so happens to offer one of the country's highest dividend yields as well. With an annualized yield of 5.4%, for example, Glaxo's dividend easily tops that of its closest British peer AstraZeneca, and even that of dividend stalwart ExxonMobil by a wide margin.

Glaxo's juicy dividend yield, however, isn't exactly an accident. The company, after all, has been on a downward spiral for the better part of the last decade, leaving its top-tier dividend as one of its last backstops against a mass shareholder exodus. As proof, Glaxo's 12-month trailing payout ratio stands at a noteworthy 258%; yet management has been hesitant to touch the dividend in any shape or form presumably out of fear of shareholder reaction.

The basic issue at play here is that Glaxo's pharma pipeline has been unable to offset the incoming competitive threats to its core respiratory and HIV franchises. As a result, the company's fairly new management team has decided to throttle back on pharma investment from both a research and development as well as mergers and acquisitions standpoint. Instead, they've diverted critical resources into less risky business ventures like consumer healthcare -- evinced by Glaxo's recent $13 billion acquisition of Novartis' consumer healthcare unit.

The bright side is that Glaxo doesn't seem interested in ruffling the feathers of income investors anytime soon, implying that its sky-high yield should be here to stay. The downside is that the company is arguably years away from returning to healthy levels of growth due to the current management team's inability to find suitable late- or commercial-stage pharma products to acquire.

So, all in all, Glaxo comes across as an attractive income play, despite its weak near-term growth prospects.