Please ensure Javascript is enabled for purposes of website accessibility
Log In Help Join The Motley Fool
Free Article Join Over 1 Million Premium Members And Get More In-Depth Stock Guidance and Research
By Adam Levine-Weinberg – May 29, 2018 at 9:20AM

JetBlue stock has been stuck in a holding pattern for three years. The company is taking advantage of its low stock price by implementing an aggressive share buyback program.

JetBlue Airways (JBLU 1.62%) reported strong first-quarter results a month ago and a solid outlook for the rest of the year. However, investors didn't seem to care, sending JetBlue stock down further -- perhaps due to concerns about whether the carrier can offset the cost headwind from rising fuel prices.

Whatever the reason, JetBlue stock has barely budged in three years. Based on its Friday closing price of $19.41, the stock trades for less than 10 times analysts' 2019 earnings estimates. This is extraordinarily cheap, considering the carrier's massive growth opportunities. 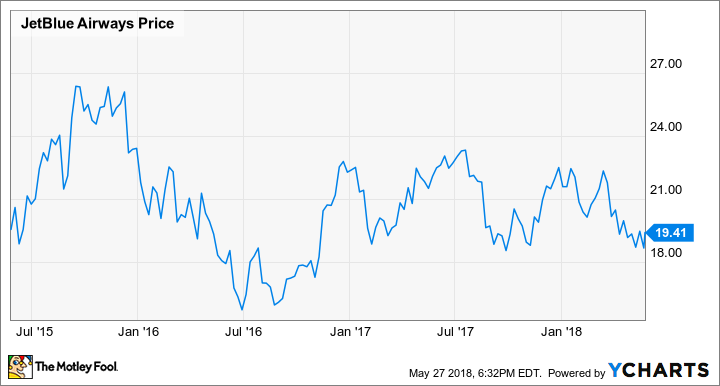 JetBlue got started last quarter by implementing a $125 million accelerated share repurchase (ASR) program. Last week, the company launched a second $125 million ASR program, which will be completed sometime during the third quarter.

While JetBlue may not complete the entire $750 million buyback program by year-end, it should be able to buy back at least as much stock as it did in 2017. Last year, JetBlue generated $1.4 billion of operating cash flow, compared to capex of $1.2 billion. This resulted in free cash flow of approximately $200 million. 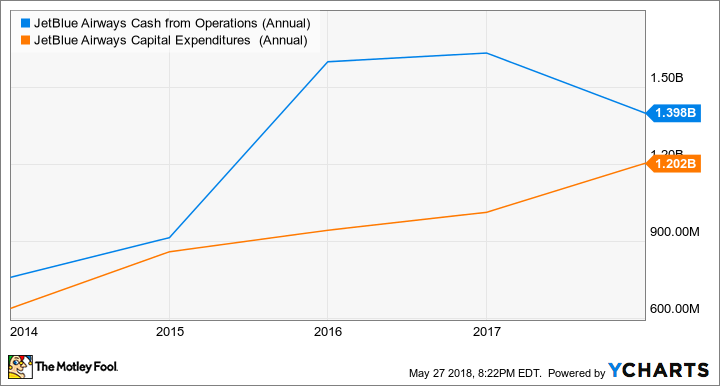 Rising fuel costs may put pressure on JetBlue's pre-tax earnings in 2018, but lower taxes should allow the company to grow (or at least maintain) its operating cash flow. Meanwhile, JetBlue expects capex to decline to around $1 billion this year (plus or minus $100 million). As a result, free cash flow could double or even triple year over year in 2018.

Catching up with peers

The recent surge in share buybacks at JetBlue is helping the carrier make up for lost time, after it lagged rivals like Southwest Airlines (LUV 2.95%) for many years in terms of returning cash to shareholders. 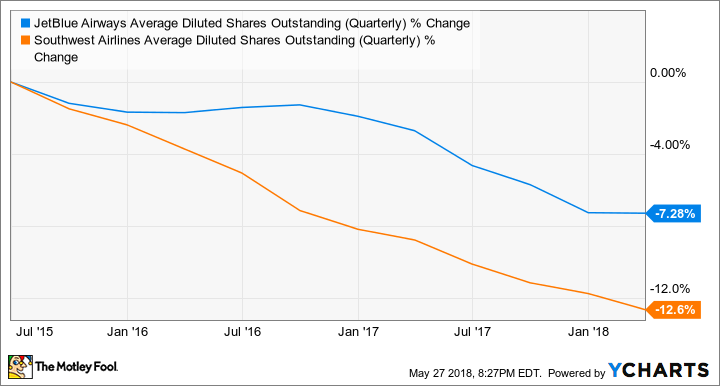 Southwest Airlines has managed to shrink its share count faster than JetBlue even though it has also invested heavily in new aircraft in recent years. (In addition, Southwest has typically had a more expensive stock, which makes it harder to shrink the share count. It also pays a dividend, unlike JetBlue.) The main reason for this discrepancy is that Southwest Airlines has gradually increased its debt and capital lease obligations to help pay for its capex. That has freed up cash to be returned to shareholders.

Despite raising its debt load by nearly $1 billion since the beginning of 2015, Southwest Airlines' leverage ratio was just 30% as of the end of March, due to the company's strong profitability. That's near the low end of Southwest's leverage target range.

However, JetBlue ended March with an even lower leverage ratio of roughly 28%. Over the past five years, it has steadily paid down debt as it worked to fix its balance sheet. Now, management realizes that the balance sheet is in excellent shape. As a result, JetBlue plans to offer new debt sometime later this year, according to CFO Steve Priest. This will provide even more cash that can be returned to shareholders.

Buybacks should boost JetBlue stock -- in the long run

JetBlue stock looks like a bargain at its recent sub-$20 price. Based on its current market cap, the ongoing $750 million share buyback plan will repurchase roughly 12% of JetBlue's outstanding shares. That would provide a double-digit boost to earnings per share, relative to the baseline of no share buybacks.

Given that JetBlue has a relatively modest capex plan for the next few years and doesn't need to reduce its debt any further, it should be able to repurchase significantly more than $750 million of its stock by the end of 2020. This should eventually lead to robust EPS growth, once JetBlue's cost-cutting initiatives stabilize the carrier's profitability. Since JetBlue has a very modest valuation today, a return to strong EPS growth could drive huge stock price gains.