In what's becoming a quarterly event, salesforce.com (NYSE:CRM) reported yet another earnings beat. The cloud-based, customer-relationship-management provider beat on the bottom line by reporting $0.52 in adjusted earnings per share, a figure 13% higher than analyst estimates of $0.46. Salesforce also reported a top-line beat, as revenue of $3.01 billion topped analyst expectations by $70 million.

If you follow Salesforce on any level, another quarter of better-than-expected performance is quickly becoming a misnomer, because it is now expected. In fact, Salesforce has beaten revenue-growth expectations for 12 consecutive quarters, a three-year streak. However, that's not the most impressive part of Salesforce's three-year run. 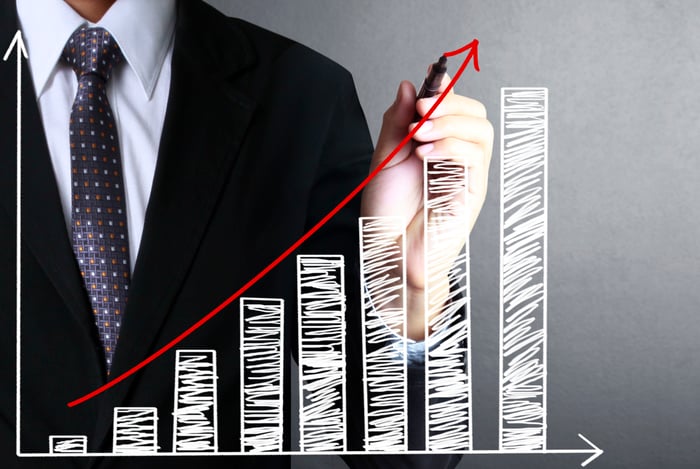 Salesforce isn't slowing down, it's speeding up

More interesting than beating estimates from Wall Street analysts is the fact Salesforce continues to grow at an increasing clip. Last quarter's revenue growth rate of 26% was 3.2 percentage points higher than in 2015's corresponding quarter. However, the company's revenue has doubled since then. This isn't a one-off quarter: As the chart below shows, Salesforce has grown revenue more than 20% every quarter during this period. For fiscal year 2019, the company forecasts $13.1 billion in revenue, a year-over-year growth rate of approximately 30%. Not all this growth is organic: A portion will be due to the $6.5 billion Mulesoft acquisition, which closed days after the quarter ended. In the year before Salesforce deal closed, Mulesoft reported approximately $300 million in revenue with 58% year-over-year growth, so it's likely to comprise a small but significant portion of Salesforce's $3 billion revenue increase, with the rest coming organically.

Due to a new ruling by the Financial Accounting Standards Board, or FASB, analysts have a new disclosure to evaluate Salesforce. Topic 606 requires the company to disclose future revenue under contract that has not been recognized as revenue on the income statement, giving investors insight into future revenue.

FASB calls this remaining transaction price, or RTP. Much like balance sheet presentation of debt, RTP figures are broken down into current and noncurrent with the former being less than 12 months and the latter more than 12 months.

As you can see, the company has approximately $20.4 billion in non-cancellable (eventual) revenue that it's not showing on its books. The current portion shows a substantial growth rate, but the noncurrent growth rate is 20 percentage points higher. While it's important to note this is not a 1-to-1 relationship with future revenue growth due to contracts signed post-period and other, non-contractual revenue, it's a good barometer of future growth.

The upshot is Salesforce is not only performing better than Wall Street analysts think -- for the last three years -- but it is continuing to grow at a rapid clip and appears that growth will not end anytime soon. CEO Marc Benioff has an audacious goal of reporting $60 billion of annual revenue by 2034. At this rate, even he may be underestimating Salesforce just like the Wall Street analysts that cover his company.