In recent months, Facebook (NASDAQ:FB) has been slowly adding e-commerce features to its hugely popular photo/video sharing service, Instagram. For example, Instagram announced partnerships with BigCommerce and Shopify in October, integrating those e-commerce platforms directly into Instagram and allowing merchants to set up shop. The service first introduced e-commerce capabilities in late 2016 and has continued to expand from there.

It's also worth remembering that Facebook added former American Express CEO Ken Chenault to its board of directors earlier this year, hoping Chenault's experience could help Facebook improve at "direct commerce." With that context in mind, Instagram just added yet another e-commerce feature.

After copying the Stories format from Snap, which also happens to be working on building out e-commerce capabilities, Instagram announced today that it was bringing shopping to Stories, in addition to being able to shop directly in the Instagram Feed. A small shopping bag sticker will show up directly in Stories when a product is available for purchase, and will take users to a page with more details about said product. 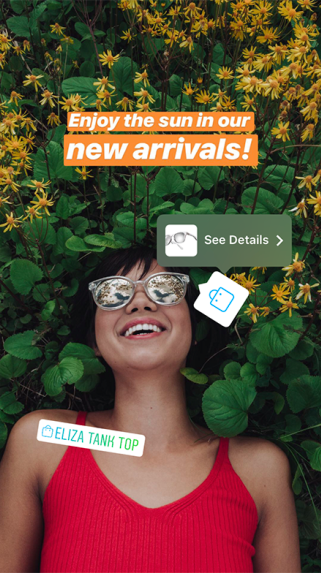 Stories is a huge distribution channel for merchants, with over 300 million daily active users (DAUs) for that feature alone, a significant chunk of its 800 million total monthly active users (MAUs). Instagram has more Stories DAUs than all of Snapchat, which had 191 million DAUs in the first quarter.

Slowly but surely, Instagram is emerging as a very promising e-commerce platform, as the visual nature of the service lends itself extremely well to product ads that seamlessly blend into users' feeds.

Just this week, KeyBanc analyst Andy Hargreaves estimated that Instagram could bring in nearly $9 billion in revenue this year, and Hargreaves expects the service to hit 1 billion MAUs in short order. Meanwhile, Facebook is just now starting to monetize Marketplace, its classifieds service.

Facebook realizes that it has an opportunity to play a larger role in commerce, both in e-commerce like what it's doing with Instagram as well as local commerce like Marketplace. However, if there's one thing we've learned in recent years, it's that Facebook continues to struggle with basic data privacy and security -- which are far more important when you're talking about money instead of cat pictures. Just last week, the company notified 14 million users that a bug may have inadvertently shared their posts publicly, further eroding user trust.

If the company hopes to make a dent in the massive e-commerce market, it needs to dramatically improve its security protocols first and foremost.