One of the most consistent businesses is the sale of beer, wine, and spirits. These products sell well both good economies and bad. Tastes change over time, but long-term consumption of alcoholic beverages has provided stable growth worldwide.

One of the biggest players in the spirits business is Diageo (NYSE:DEO), the company behind Johnnie Walker, Crown Royal, Ketel One, and Captain Morgan. The company has its hands in some of the most popular spirits brands in the world. But is it a buy for investors? 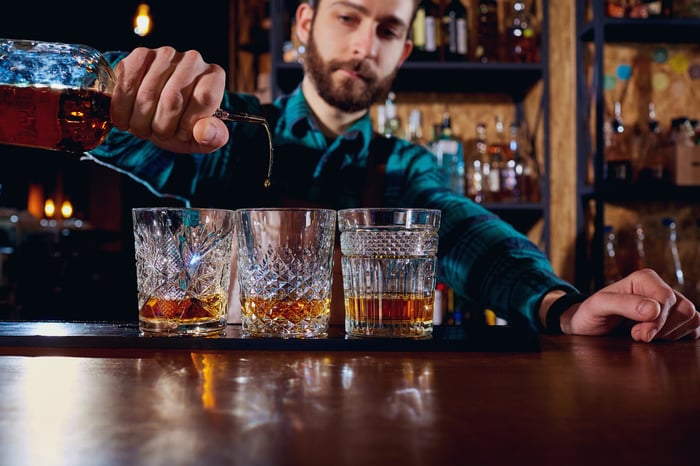 Diageo is as steady as it gets

Diageo is a diverse business as far as spirits makers go, but it still relies on scotch for 27% of its revenue as of the six months ended on December 31, 2017. Beer makes up another 15% of sales, with vodka and North American whiskey making up 11% and 9%, respectively.

You can see that Diageo has had ups and downs over the past decade, but has been a steady profit machine. It won't provide investors much growth (which I'll get to below), but its slightly increased margins and revenue and earnings are going to be steady in the spirits business. 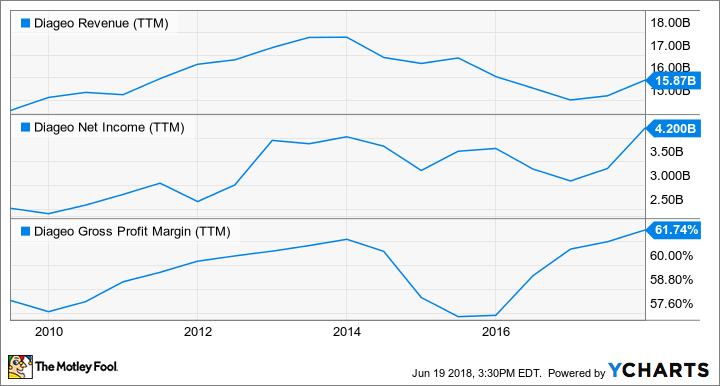 However, while spirits will be a steady business, I find it hard to see Diageo as a big winner for investors long-term.

Why big gains are hard in spirits

Spirits consumption is growing slowly -- Diageo's volume was up 1.3% in 2016, 1.1% in 2017, and 1.8% in the first half of fiscal 2018 -- and there's no indication volume growth is going to be higher than low-single digits long-term. To grow earnings, the other option besides volume growth is raising prices in the hopes of raising revenue and expanding margins. But that may be hard to do without major consolidation, which seems unlikely.

The beer business could serve as a model for spirit consolidation. It's consolidated rapidly over the past decade, with Anheiser-Busch Inbev, Heineken, and Molson Coors dominating the market in the U.S. and around the world. As consolidation has occurred, companies have slowly raised prices to improve margins without the threat of competitors undercutting them on price. That's how they're able to grow.

A similar "consolidate and increase prices" model hasn't taken hold in the spirits business, and even big names like Brown-Forman, Constellation Brands, and Stock Spirits are far from dominant in the market. One of the biggest reasons consolidation isn't as effective in spirits is because the manufacturing infrastructure is very different from that of beer. Beer brands can change flavors with the same brewing equipment, giving brewers with scale more power. In spirits, making tequila, scotch, and vodka can be entirely different processes and require different distilleries. Customers can replace one spirit with another if prices get too high or tastes change, something that happens regularly.

We saw this replacement risk in the most recent results from Diageo, which showed scotch only growing 3% organically while the smaller gin and tequila businesses grew 16% and 43%, respectively. As tastes ebb and flow, competitors like Diageo can gain or lose market share depending on when their products are in favor with consumers. That puts a cap on how much the company can raise prices to grow earnings.

Why Diageo's stock is tasting a little sour

As much as I like the stability of the spirits business long-term, I don't think it's worth paying a big premium for a company like Diageo. And with shares trading at 24 times earnings, the price for the stock is steep. The dividend of 2.4% is also not all that appealing compared to other stable value stocks.

I wouldn't short Diageo's shares because there's no fundamental flaw in the business, but to be a buyer I would need to see more value than shares are showing today, which will keep me out of the stock for now.