Shares of Yelp (NYSE:YELP) have fallen more than 17% since early last month as the market frets over the company's decision to rollout more flexible non-term ad contracts. After all, the move increases the risk that Yelp's recent revenue acceleration may prove unsustainable if newer advertisers can more easily abandon the platform.

Though I've since argued that shareholders should be more willing to embrace Yelp's new model, investors also should keep in mind there's a reason advertisers are flocking to Yelp in the first place. Despite competitive threats from the likes of Facebook and Google, the local business-review specialist still is the leading online destination for its purpose. In its most recent quarter, cumulative reviews on the platform increased 22% year over year, to 155 million, while average monthly app unique devices climbed 17%, to 30 million.

Put another way, Yelp enjoys a classic network effect: More businesses are turning to Yelp to spread the word. And in turn, more consumers are using Yelp's platform to find and learn about those businesses. 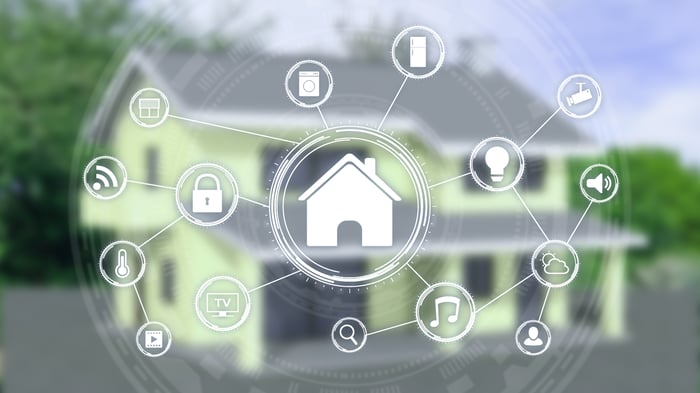 But while many people think of Yelp as the place to find restaurants, another industry deserves more credit for its recent growth: smart homes. Subsequent to its first-quarter report, Yelp released its Q2 2018 Local Economic Outlook. In it, Yelp revealed some interesting details about how the smart-home boom is helping its own business thrive.

More specifically, Yelp says the home and local services industry has become the platform's fastest-growing and largest category by revenue. Within that category, searches for the term "smart home" have quadrupled over the past two years and the number of requests from consumers seeking home-automation businesses, in particular, has more than doubled over the past year.

Yelp also has seen a roughly 30% year-over-year increase in both advertising revenue from its platform, along with the number of home-automation businesses listed. With over 1 million total local businesses set up to receive quotes via Yelp, consumers submitted roughly 4 million quote requests to local businesses in the first three months of 2018.

In retrospect, this trend shouldn't be terribly surprising. From connected light switches and bulbs to smart speakers, smart thermostats, Wi-Fi cameras, garage doors, locks, and even connected fridges and robotic vacuums, it's no mystery that smart-home devices have soared in popularity.

Better yet, smart homes aren't slowing down anytime soon. "The rapid growth and industry response suggests that the rise of smart homes may not be a flash in the pan and has extended beyond early adopters," Yelp elaborated.

Of course, enabling one thriving industry certainly can't guarantee Yelp's success over the long term. But considering Yelp is perfectly positioned to capitalize on the popularity of virtually any market that's supported by local businesses, many investors are underestimating just how powerful it truly is.