Kratos is building a division at the vanguard of a hot new market, but is that enough to make shareholders millionaires?

Kratos Defense & Security Solutions, Inc. (KTOS 1.36%) is a relative pip-squeak in the defense space, with a market cap of just $1.1 billion. That, however, could be a blessing, as it allows the company to shift gears at a more rapid pace than larger peers like $90 billion-market-cap Lockheed Martin or $60 billion-market-cap General Dynamics. In fact, the ability of Kratos to shift from its older business to the hot unmanned drone space is going to be the big determinant of whether or not it is a millionaire-maker stock. Here's a quick rundown of what you need to know. 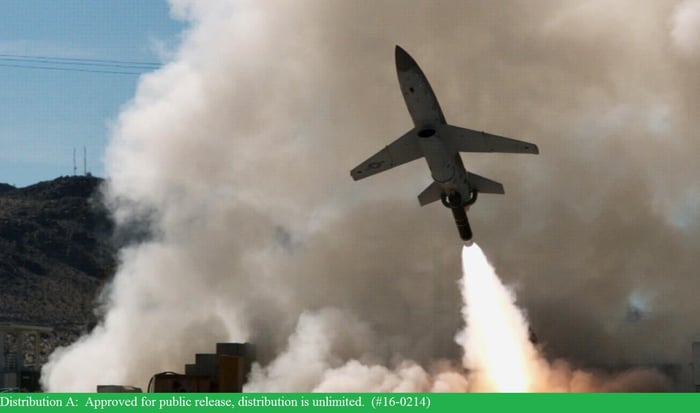 That makes complete sense, given that this is the division of the company that investors are most excited about. And it's the one that will determine whether or not Kratos can live up to the investor expectations that led to a near-doubling of the stock price over the past three years. The only problem is that the unmanned systems division only accounts for around 20% of revenue and 1% of operating income today. The other pieces of the business are much larger, overall, and far more profitable.

That said, revenue in the unmanned division grew nearly 80% year over year in the first quarter. And this segment of Kratos went from an operating loss to an operating profit, albeit a tiny one. It looks like the drone business is at a key inflection point that hints at material business growth down the line if Kratos can keep executing at a high level in this segment of its operations.

With a relatively small company like Kratos, it's important to take a look at its balance sheet. Financially weak small companies will have a hard time funding their growth initiatives. Kratos gets mixed reviews here. It appears to have a solid financial foundation in place, with long-term debt only making up around a third of its capital structure and a robust current ratio of 2.6. It doesn't appear that funding its investments is a problem when you look at the balance sheet. However, interest expense ate up around 50% of the company's EBITDA in the first quarter. 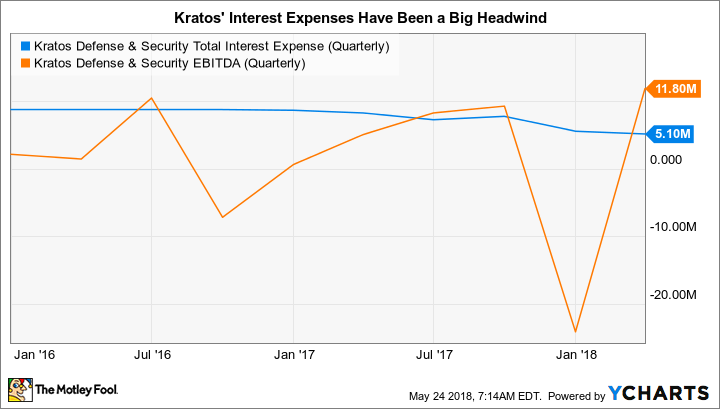 That's clearly more troubling, though not surprising given the heavy investment in research and development that's taking place (partially funded by debt) as Kratos looks to be a leader in the unmanned drone space. The company, however, reports that its heaviest investment spending days are behind it. That suggests leverage could be less of an issue going forward as past spending leads to higher revenue. Still, investors buying this stock in the hopes that it will be a millionaire maker will need to watch the company's leverage ratios and interest expenses closely.

Another key issue to monitor is Kratos' pipeline of work. The company is tiny compared to the industry giants, which have more financial resources at their disposal to direct to the drone space. After all, Kratos isn't the only company that is trying to win government contracts here. While the military contractor space tends to involve complex interrelationships with companies often competing against each other for contracts while working with each other on contracts (sometimes the same ones), Kratos has to win its share if it wants to grow.

On this front, it has been announcing a steady stream of wins, notably for its drones. It doesn't need to win every contract, but it does need to win enough to grow its backlog. The company's book-to-bill ratio in the first quarter was 1.2 times, which means it inked more new contracts than it fulfilled in the period -- a good sign. It also recently received government approval to market some of its drone technology overseas. That should be a net benefit, as it expands the company's playing field. Overall, it has around $6 billion worth of bids out for work. You'll want to watch closely to see if it wins enough to keep growing its backlog, or at least gets to participate in support of the ultimate contract winners. The more work it has in the pipeline, the higher its revenue is likely to be in the future.

The quick answer to the question posed by the headline is that Kratos could be a millionaire-maker if its growth plans on the drone side play out as hoped. However, it's still just a small part of the business, facing material competition, and Kratos is dealing with some hefty interest expenses left over from its investment in the drone division. There's a real risk that it won't be able to live up to investor expectations if it can't get enough business to support the debt it took on to build its drone operations. That's too risky a bet for my taste, but more aggressive investors might find the potential here enticing.