Facebook's (NASDAQ:FB) has been pushing longer videos on its Facebook Watch platform since August, and now it's doing the same thing on Instagram.

On June 20, Facebook announced IGTV (Instagram Television), which is a longer-form video hub found on both the Instagram app and through a new, separate IGTV app. While Facebook Watch hasn't exactly been a hit with Facebook's more than 2 billion users since it launched nearly a year ago, IGTV has the potential to be a different story. 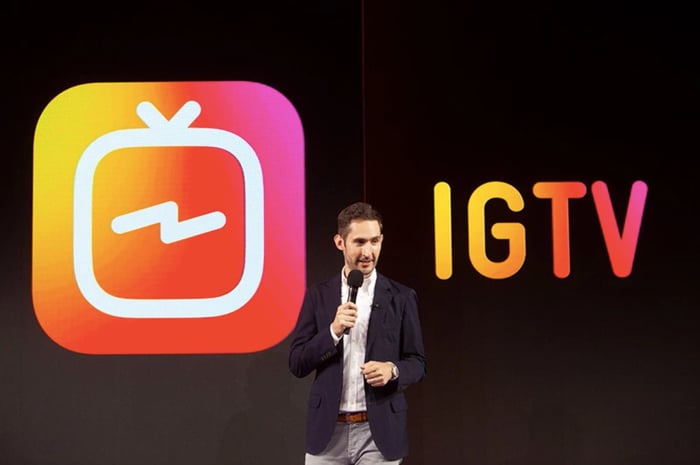 Instagram's IGTV is launching at the same time that the company announced the 8-year-old photo-sharing app had passed 1 billion users. In addition, Bloomberg released a report on June 25 that estimated Instagram was worth more than $100 billion, which is amazing when you consider Facebook paid just $1 billion for the app back in 2012.

This means that IGTV is coming at the opportune moment as Instagram's growth has skyrocketed, growing from 800 million users in September to over 1 billion users now. In the next five years, the app is expected to grow to more than 2 billion users, according to Bloomberg Intelligence analyst Jitendra Waral.

While Facebook is already past 2 billion users, Instagram seems more promising for long-form video based on the age of its audience and how that audience uses the app. It's no secret that Instagram has become a haven for young people that have gradually been fleeing Facebook, which they consider overrun by their parents and grandparents. This makes Instagram a particularly attractive place to jump-start a long-form video platform considering this age group is comfortable with the online video viewing experience after coming of age with Snap's Snapchat, Netflix, and Alphabet's YouTube.

The company notes that IGTV is "built for how you actually use your phone, so videos are full screen and vertical. Also, unlike on Instagram, videos aren’t limited to one minute. Instead, each video can be up to an hour long."

While videos on IGTV can be up to one hour in length, in the first week, most IGTV creators kept videos to about 10 minutes. This seems like proof that IGTV publishers are well aware of their audience of "digital natives" who want information quickly and may not yet be willing to sit through an hour-long episode on a social media platform. If IGTV succeeds in competing with YouTube, then it could eventually become a hub for longer and more high-quality video series.

Meanwhile, Facebook Watch has failed to really takeoff despite a reported 2018 budget reportedly of $1 billion. While Facebook has been paying a multitude of publishers to upload episodes to the Watch tab, not many viewers are clicking on the Watch tab, apparently because they're not used to going to Facebook for video, especially when better content can be found a few clicks away on YouTube or Netflix. Facebook is looking to improve on the Watch platform by launching new tools, like a subscription option that lets viewers avoid ads, as well as ordering a slew of news shows from big brand names like CNN, Fox News, and ABC News.

An important advantage that IGTV has is that users have full control over which videos they watch on IGTV. Instagram has always prided itself on being more customizable and less cluttered than Facebook. On Facebook, you don't have control over which videos show up on your News Feed, so it will always be cluttered with a multitude of short- and long-form videos shared by your friends or the pages you follow. This abundance of content can be overwhelming and frustrating for users. On Instagram, you're only going to see the shows that you actively choose to watch.

This reinforces the view that Instagram users skew toward the younger age groups that advertisers are eager to reach. IGTV won't have ads at first, but it seems reasonable to assume Facebook will try to monetize the videos with ads soon. And brands can be providers of Instagram video, snagging the attention of viewers.

People were shocked to learn that changes to Facebook's algorithm led to users spending 50 million fewer hours on the platform per day for the fourth quarter, or about a 5% decline. Over the next year, investors will be watching closely to see whether IGTV seems to be resonating with Instagram's 1 billion users and boosting the time people spend each day with a Facebook product.