Relations between the U.S. and China have been tense lately, with moves on the trade front having ramped up dramatically in the past several months. That's prompting some U.S. allies to take action to boost their defenses against the increasing threat of Chinese aggression and reassert their balance of power in the region.

Boeing (NYSE:BA) has locked down a fifth foreign customer for its P-8 Poseidon, winning a four-aircraft order from New Zealand valued at $1.6 billion. That's a big buy by the Kiwis, and the logic behind the decision provides reason for optimism that other countries might follow with their own orders for the high-tech surveillance jet.

New Zealand Defence Minister Ron Mark in a statement announcing the buy said "the purchase ensures the Defence Force can continue to deliver the country's maritime surveillance, resource protection, humanitarian and disaster response around New Zealand and across the South Pacific." 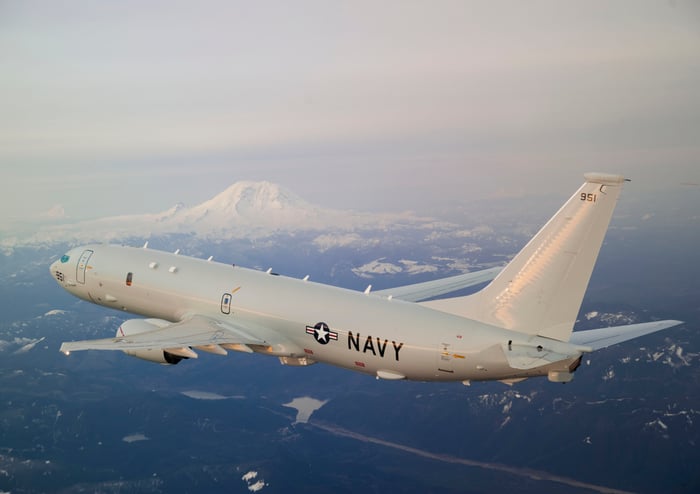 One of the U.S. Navy's P-8 Poseidon aircraft in flight. Image source: Boeing.

The purchase is a major commitment for New Zealand, which reported just $2.3 billion in total military expenditures in 2017, according to the Stockholm International Peace Research Institute. The cost of the planes will be spread out through 2026, with the aircraft expected to be delivered and operational starting in 2023. The new planes will replace an aging fleet of 1960s-era Lockheed Martin P-3 Orions.

The estimated cost includes spending for infrastructure, training equipment, and support for the new aircraft.

Mark did not mention China in his statement announcing the purchase, but the Chinese Navy's increasingly aggressive moves to build a foothold in the South China Sea are central to the decision to invest in the Poseidon aircraft. China has had a long-running dispute with its neighbors centering on ownership of the mineral-rich Spratly Islands, earlier this year challenging three Australian warships en route to Vietnam.

As part of New Zealand's annual Strategic Defense Policy Statement, released just last week, Mark and his team note that China has at times "challenged" existing order and said it was up to allied nations to maintain "maritime security and freedom of navigation" in the region.

Australia is also buying Poseidons -- as are India, Norway, and the United Kingdom (the other foreign buyers of the plane) -- and New Zealand officials said that part of the reason for the purchase of the planes is to be able to work more closely with its neighbor, as well as with the U.S. and U.K., in the region.

"Maintaining a maritime patrol capability is essential for New Zealand's national security, and for our ability to contribute to global security efforts," Mark said in announcing the purchase.

Another of China's neighbors, South Korea, is expected to be the next country to buy the Poseidon, with reports out of the country earlier this year saying that the government in Seoul is pushing to buy up to six units of the aircraft. Similarly to New Zealand, the Koreans are believed to favor the P-8 over potentially less costly options from Airbus or Saab in part because they want to demonstrate a unified front with regional allies.

Beyond South Korea, expect Boeing to also market the plane to Vietnam, Indonesia, and Malaysia, which are also eager to increase their maritime defenses but might need U.S. government help affording the equipment. There are also opportunities to sell the plane to Saudi Arabia and Italy, in part to help protect their interests in the Indian Ocean.

The Poseidon, at a flyaway cost of more than $125 million apiece before support and service, is an expensive option for most of the region. Yet despite carrying only specialized weapons, the modified Boeing 737 might also be considered one of the aircraft that worries Chinese and Russian military planners the most.

For smaller countries like New Zealand, the idea of outspending and outmuscling China is out of the question, so the country is arguably better-off investing in a high-tech surveillance platform that will ensure it is able to move in lockstep with its larger allies in the region.

That same logic could apply to many other potential customers.

The Poseidon's success is good news for Boeing Defense, which has become increasingly marginalized inside the aerospace giant as the commercial aviation side continues to record blockbuster sale and delivery numbers. Boeing in April overhauled its defense unit -- which even when combined with space and security accounted for only 22.6% of total company revenue in 2017 -- after a series of setbacks including delays to the KC-46 refueling tanker.

Boeing has long sought opportunities to convert its commercial aircraft for military use, for example using a modified 767 wide-body as the basis for the tanker program. But the company has experienced some setbacks, including a push by the Air Force to cancel a $7 billion refresh of its Joint Surveillance Target Attack Radar System (JSTARS) aircraft. Boeing had pitched a derivative of the 737 for JSTARS.

Shares of Boeing these days move mainly in response to the commercial side, but the diversification the defense business provides is an important selling point for the company and should come in handy whenever the commercial up cycle inevitably ebbs. It looks like Boeing Defense has a winner in the Poseidon, and that's good news for shareholders, even if they are more focused on the commercial business.