Last year was one that investors in Textainer Group Holdings (NYSE:TGH) will likely remember fondly as the container leasing company's stock rocketed an eye-popping 188%. This year, however, has been a different story as shares are down nearly 30% since the beginning of the year, and more than 40% off their high. That sell-off might have investors wondering if now's a good time to buy.

A deep downturn in the global shipping market has weighed on Textainer's financial results in recent years. But as market conditions have been improving over the past year, Textainer's revenue increased in five straight quarters, and the company has returned to profitability. In fact, adjusted net income grew 15% in the first quarter versus where it was at the end of 2017, which is noteworthy since it's traditionally the industry's weakest quarter. 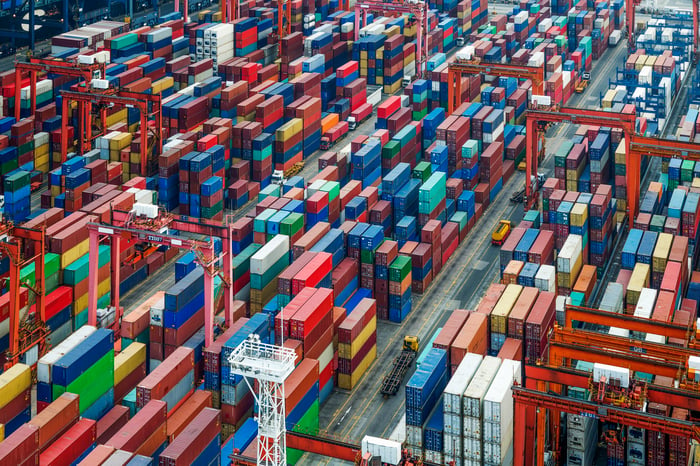 With industry fundamentals strong, Textainer ordered boatloads of new containers this year -- investing $428 million through early May -- that it expected to lease out to customers later this year at significantly higher rates than the average of its existing fleet. As a result, the company "expect[s] to see further growth and continued improvement in our financial performance," said CEO Phillip Brewer. That outlook suggests Textainer's stock could have more upside from here, especially after selling off this year.

While market conditions were strong to start the year, Textainer's stock -- as well as those of fellow container lessors Triton International (NYSE:TRTN), and CAI International (NYSE:CAI) -- has tumbled due to concerns about the potential impact of an escalating trade war between the U.S. and China. Heading into 2018, analysts at IHS Markit expected global container trade volumes to rise 4.9%. With the industry only expected to increase container fleet capacity by 4.7%, container pricing should remain strong, which would be a boon for container leasing companies Textainer, Triton, and CAI.

However, both the U.S. and China have issued tariffs on goods shipped by container. While the initial ones have been small in the grand scheme of things, representing about 3.1% of America's containerized exports to China, further retaliatory tariffs from both countries could have an even greater impact. If the trade war continues escalating, it could slow containerized trade growth, which would eventually weigh on the rates container leasing companies can earn on new containers.

At the moment, container leasing companies aren't worried. Triton's CEO stated in the company's first-quarter earnings release: "We expect market conditions to remain favorable. Trade growth is anticipated to remain positive, and many of our customers continue to rely heavily on leasing for new container additions to their fleets." Because of that, Triton expects earnings to "increase gradually throughout 2018," the CEO said.

CAI International's CEO echoed that sentiment saying during the company's first-quarter call that the tariffs had "no impact to date." Further, he noted that while there is "some level of concern about the talk," no one is "changing what they do now." However, he did caution that "if the rhetoric continues to get bad," there is a question of whether companies will delay signing new container contracts and whether there could be an "economic effect ... in the level of demand."

That unknown impact of the escalating trade war is hanging over the industry right now. In a worst-case scenario, it could significantly slow global trade, which would likely weigh on container prices, especially since Textainer, Triton, and CAI have spent heavily to add to their fleet over the past few years. If that happens, the stocks of all three companies could continue sinking.

On the one hand, it looks like Textainer's stock still has ample upside ahead since it's just starting to turn things around from the last downturn in the shipping sector. However, I'm concerned that the industry seems to be downplaying the downside potential of the brewing trade war between the U.S. and China, which could plunge the shipping sector into another downturn. That's why I'd hold off on buying shares until there's a ceasefire. In the meantime, there are plenty of other top stocks with just as much upside, if not more, that don't have the added risk of being directly exposed to an escalating trade war.