Shares of tile retailer Tile Shop Holdings (NASDAQ:TTSH) surged on Thursday following the release of the company's second-quarter report. Tile Shop beat analyst estimates for both revenue and earnings, which was enough good news to overshadow a decline in comparable-store sales. As of 11:30 a.m. EDT, the stock was up about 9.6%.

Tile Shop reported second-quarter revenue of $92.9 million, up 3.9% year over year and $2.5 million above the average analyst estimate. New stores drove this sales increase, with the company adding 10 locations since the end of the second quarter of 2017. The total store count now sits at 140. 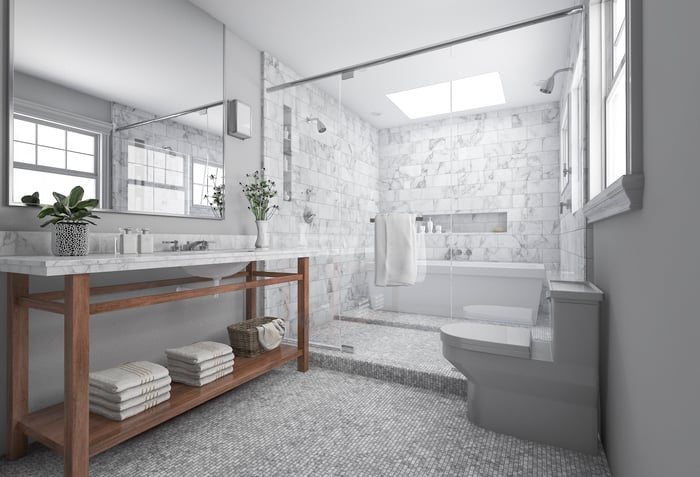 Sales growth from new stores was partially offset by weak results from existing stores. Comparable-store sales slumped 1.8% during the quarter, compared to 0.5% growth in the prior-year period. Through the first six months of the year, comparable-store sales have plunged 4.4%.

The bottom line fell right along with comparable-store sales. Tile Shop reported earnings per share of $0.10, down from $0.15 in the prior-year period. Despite the decline, that result still beat analyst expectations by $0.02. The silver lining was that gross margin edged up during the quarter, increasing by 0.6 percentage points compared to the second quarter of 2017. However, this was more than offset by higher operating costs.

Tile Shop interim CEO Robert Rucker described some of the steps the company took during the period: "During the second quarter, we continued to improve our assortment and grow our pro customer base. We also improved our store experience through the combination of store remodel and store merchandising investments."

Tile Shop had a better second-quarter than analysts were expecting, but there were more negatives than positives on an absolute basis. With the company expecting higher costs in the third quarter as it adds new regional sales leader positions, a return to earnings growth may still be many quarters away.