Investors in Tesla (NASDAQ:TSLA) often point to the company's network of high-speed recharging stations as a key advantage. Most Tesla owners can use the stations and their "Superchargers" for free -- an important selling point that has helped Tesla win over wary first-time electric-car owners.

While other providers are stepping up to build high-speed recharging stations in the U.S. and Europe, as of right now, Tesla is the only electric-vehicle maker with a robust high-speed recharging network. It's a powerful selling point that any major automaker looking to compete with Tesla has to be able to counter.

So far, no rival automaker has proposed to build a recharging network that's anything like Tesla's. But one company that's looking to directly challenge Tesla in the market for upscale, fast electric vehicles has come up with a counter for the Supercharger argument that doesn't involve building thousands of stations.

That company, German sports-car maker Porsche, plans to beat Tesla in a different way: by beating its recharging technology. 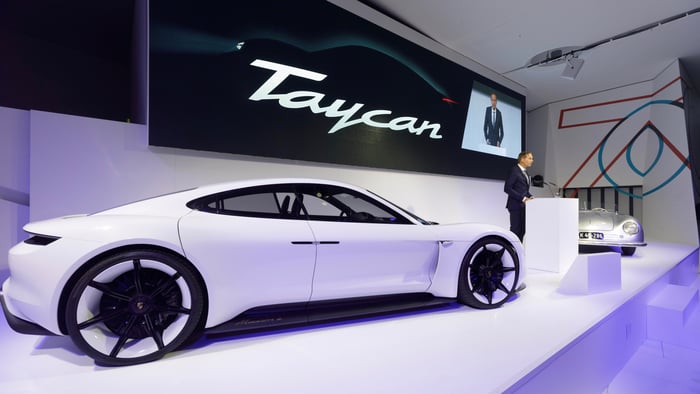 Porsche's proprietary chargers will be Porsche-fast

Porsche is a small company by auto-industry standards. But because it's a subsidiary of global giant Volkswagen AG (OTC:VWAGY), Porsche's elite engineering team can develop expensive advanced technology that it might not otherwise be able to afford to put into production.

Here's what makes them special: Those 800-volt, 350-kilowatt chargers will allow the Porsches to recharge to 80% of capacity in just 15 minutes. That's half the time required by Tesla's current Superchargers, and it gives Porsche's dealers a powerful way to counter that key Tesla selling point.

Porsche has already begun installing Turbo Chargers at its dealers

Of course, Tesla will still be able to point out that Porsche won't be building a network of thousands of proprietary recharging stations. But Porsche's dealers will have Turbo Chargers available, some other sites may install them -- and Porsche may offer them to owners for home installation.

In fact, the first two Porsche Turbo Chargers are already installed and working, at a Porsche dealership near Berlin. While there are no Porsches that can take advantage of the 800-volt chargers (aside from factory prototypes) yet, the station also includes two conventional CCS fast-chargers that can be used by many electric and plug-in hybrid vehicles, including Porsche's own plug-in hybrid models.

Expect Porsche to open more stations over the next several months, as it prepares for the launch of its first battery-electric vehicle next year. The company is known to have two BEVs in development: The first, a four-door sports sedan called the Taycan, is expected sometime in 2019. It'll be followed by an SUV-like variant currently known by its show-car name, the Mission E Cross Turismo, that will enter production in about 2021. 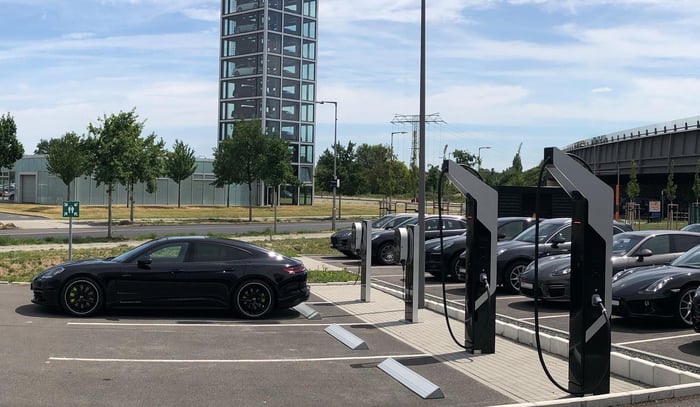 Will it be enough to offset Tesla's huge Supercharger network?

I think that if Porsche installs Turbo Chargers at all of its dealerships, that -- plus the increasing availability of CCS DC Fast chargers in Europe and the United States over the next couple of years -- will probably be enough to counter the Supercharger argument in the minds of most buyers.

Remember, Porsche is a small, luxury automaker. It's unlikely to sell electric vehicles in the mass-market numbers to which Tesla aspires. It doesn't need to have Turbo Chargers on every corner: It just needs to have enough -- alongside the growing network of CCS fast chargers -- to give potential owners confidence they can travel with their cars.

Will Porsche's plan exceed that "enough" threshold? We'll start to find out when the Taycan begins arriving at dealers next year.