For large-cap dividend stocks, it's been somewhat of a disappointing year. The Vanguard Large Cap Value index is up less than 1% on the year, compared with a nearly 5.5% gain for the S&P 500.

Two such large-cap stocks are Starbucks (NASDAQ:SBUX) and McDonald's (NYSE:MCD), both suffering from a downturn in eating out in the U.S. The current shift to more food delivery options has caused each stock to badly trail the market in 2018, down roughly 11% (Starbucks) and 5.5% (McDonald's) year to date as of this writing. 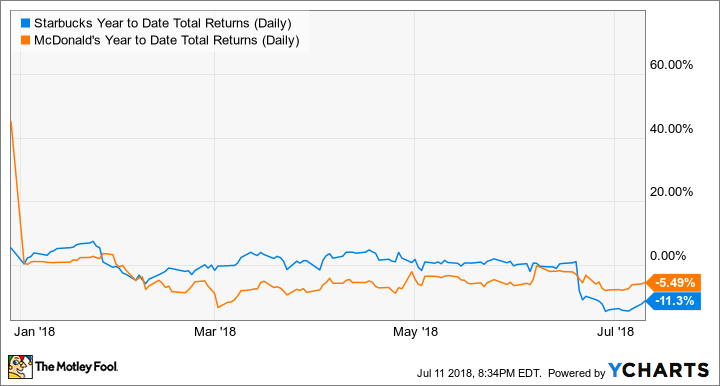 However,  Warren Buffett once said, "you pay a high price for a cheery consensus," and bargain hunters might currently be looking at these two quick-service giants. So, which is the best value at the moment?

For large-cap dividend investors, you might be interested not only in the current dividend, but also how much each company returns to shareholders via share repurchases. Comparing those figures to share price and market cap gets you yields. The net payout yield combines these two measures into a single figure, which investors can almost think of as a coupon on a stock (though one that moves around). Here's how each company stacks up:

Not only has Starbucks paid out more to shareholders over the past 12 months with a larger net common payout yield than McDonald's, it also recently hiked its dividend 20% -- the second time it's done so in less than a year. That's put the company's forward dividend yield above McDonald's, which has long had a better yield due to Starbucks' higher historical valuation. In contrast to Starbucks' aggressive raises, McDonald's has been more consistent, raising its payout every September; its last raise was only around 7%.

Last November, Starbucks changed its capital allocation policy, taking on more debt in order to return cash to shareholders. More recently, the company decided to license its CPG and food service business to Nestle, which will bring in around $7 billion cash in the near term. The company now plans to return $25 billion to shareholders over the next three years -- over 33% of the current market capitalization! 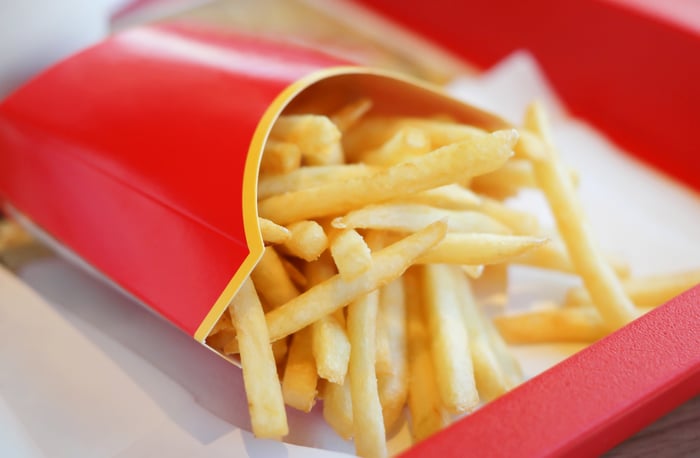 Starbucks currently trades right in line with McDonald's -- the first time that's happened in many years -- with a forward price-to-earnings ratio of just over 20. In addition, Starbucks is even cheaper on an enterprise value-to-EBITDA basis, which takes into account both companies' capital structures. That gives it the edge in my book. 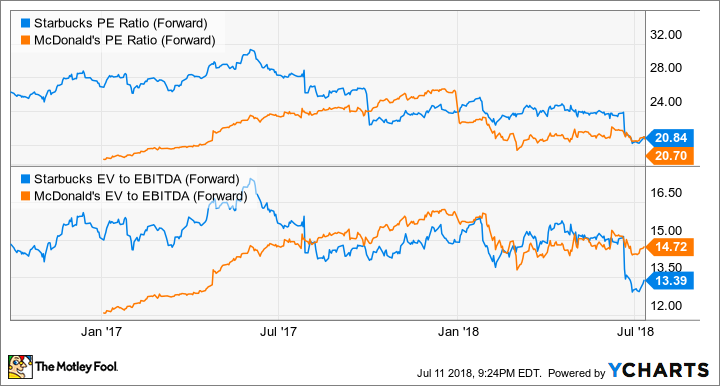 Of course, Starbucks' relatively cheap valuation could be a sign that something is amiss. One metric most investors look to in order to judge the health of a retail business is comparable-store sales, which measures how much stores open for at least a year are selling versus the previous year.

As you can see, McDonald's performed better in the most recent quarter, which may help explain why Starbucks trades at such a low valuation today. However, it should also be noted that McDonald's is well into a turnaround plan authored by Steve Easterbrook, who became CEO in early 2015.  Easterbrook aggressively refranchised many territories, including China and Hong Kong last year, and innovations such as all-day breakfast, healthier options, and in-store self-ordering kiosks have had positive results, reflected in the current comparable sales numbers. McDonald's notched a comps increase of 5.3% in 2017.

Meanwhile, Starbucks -- which saw comps growth of 3% in 2017 -- has just begun its own transformation. New CEO Kevin Johnson has only been on the job since early 2017, and just recently had the training wheels come off when Howard Schultz stepped down from Starbucks' board last month. Johnson is currently just beginning his own streamlining campaign, selling off many noncore territories to franchisees, focusing on high-return new store locations, and licensing most of Starbucks' CPG business to Nestle.

McDonald's is performing quite well currently, and investors may want to ride the "hot hand," especially with its heavily franchised model. However, I happen to think Starbucks' lull is just a blip on the way to a recovery, much kike McDonald's in 2014-15 before Easterbrook turned things around. With Starbucks just at the early stage of its own adjustment, and currently sporting a higher dividend yield and cheap valuation, the green mermaid gets my pick at the moment.