With a dividend yield of 4% and an incredibly long track record of increasing its payout, integrated oil and gas giant ExxonMobil (NYSE:XOM) has been a great wealth-creating stock for many investors over the long haul. Recently, though, ExxonMobil has hit a rough patch as production volumes slide, and investors are wondering if the recent decision to double down on oil and gas spending is the best path forward for the company.

These factors might have a few investors looking elsewhere for a dividend stock they can rely upon for steady income over the next several years. So we asked three of our investing contributors to each highlight a stock they see as one that could replace ExxonMobil in an income portfolio. Here's why they picked Enterprise Products Partners (NYSE:EPD), AT&T (NYSE:T), and Ford Motor (NYSE:F) 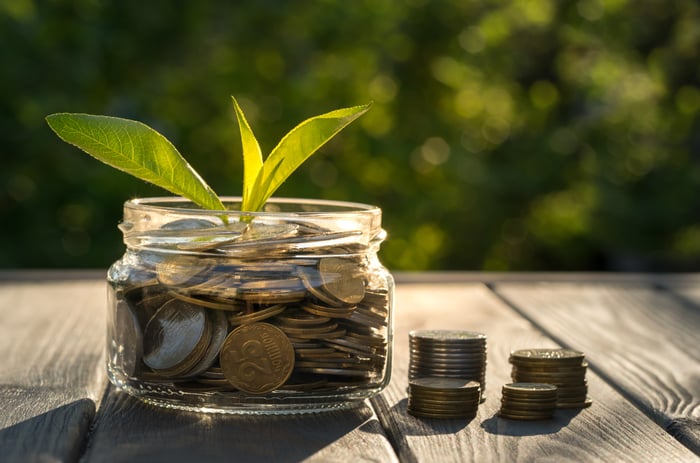 Targeting the most stable segment of the oil & gas industry

Tyler Crowe (Enterprise Products Partners): The oil and gas business is an incredibly volatile one, which makes ExxonMobil's streak of dividend increases that much more impressive. It has been able to do what it's done because it owns assets in every aspect of the value chain, and weakness in one segment is likely to be offset by strength in others.

Of all the various parts of the oil and gas value chain, the one that has consistently shown to be one of the most steady is the midstream segment -- transportation, processing, and logistics. Companies in this part of the industry act mostly like tollbooths that charge a fee for their services, which mostly insulates them from the ups and downs of commodity prices.

Enterprise Products Partners has consistently been one of the best operators in this industry and has created incredible value for its investors. Not only does it pay a hefty yield of 5.9%, but it has also been able to increase that payout every year since its IPO in 1998 and is working on a streak of 56 consecutive quarters with an increased payout. It has absolutely crushed the S&P 500 on a total return basis. 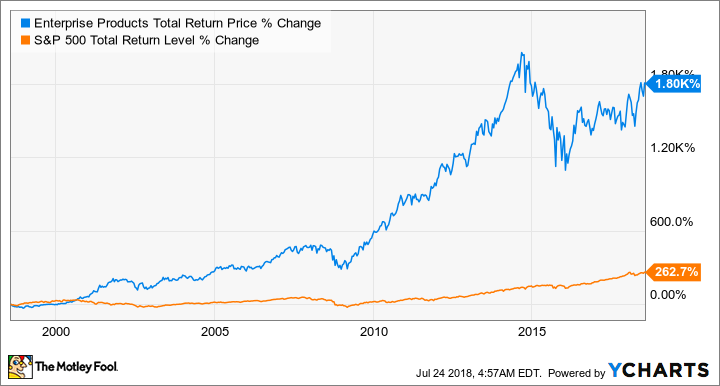 With the company going through a period of higher-than-normal capital spending to meet the booming demand for oil and gas infrastructure, management has elected to slow the rate at which it grows its payout. That doesn't sound that appetizing at first, but it should ensure the longer-term viability of its payout, and management has consistently shown itself to be a good steward of shareholder capital, so we should give a little benefit of the doubt here.

If you want a high-yield investment that exceeds ExxonMobil's yield and gives you exposure to North America's booming oil and gas industry, Enterprise Products Partners is a great place to start.

Keith Noonan (AT&T): AT&T's shares are down roughly 3% over the past decade, but its chunky payouts have at least elevated its total return price over the stretch to roughly 70%. That's well below the S&P 500 Index's roughly 170% total return over the period, but there are reasons to think the telecom giant offers compelling value at current prices.

At 6.4%, AT&T stock's payout comes in handily above Exxon's. AT&T also has a 34-year streak of delivering annual payout growth -- a stretch that falls just one year shy of ExxonMobil's record.

Ma Bell's shares trade at roughly 9 times this year's expected earnings and are priced in the range of five-year lows. The stock has dipped roughly 20% year to date because of uncertainty surrounding the long-term impact of the Time Warner acquisition and the Justice Department's recent announcement that it will appeal the court decision that granted approval for the deal.

The appeal does create added uncertainty for investors looking to plot out the trajectory of the business. It seems likely that the merger will hold up to the Justice Department's second challenge, but if it doesn't, AT&T will be freed up to pursue other acquisitions and return more income to shareholders. If the deal does go through, Ma Bell will have solidified its place as one of the world's leading content producers, added assets that bolster its bundling initiatives, and opened up opportunities to improve advertising rates on Time Warner content by implementing data from its mobile network for targeted advertising.

Expensive oil should be sinking this stock -- but isn't

Rich Smith (Ford): With oil prices over $70 and still near their highs for the year, you'd think things would be going great for ExxonMobil -- and to an extent they are, but to another extent, they also are not. Sales in the last quarter were up 16.7%, but profits at the oil giant were up only 16%, or slightly slower than sales.

In contrast, Ford Motor Company could see sales of profitable SUVs and large trucks slide if oil prices keep rising. (Ford's F-150 line alone accounts for 90% of the company's profits, according to a report on NPR.) Ford's also facing threats in the form of looming trade wars with Europe and China, and the growing popularity of electric cars from companies such as Tesla. Yet Ford grew its profits faster  than sales in its most recent quarter.

Ford also pays a bigger dividend yield than Exxon does -- 5.6% versus 4%. And believe it or not, Ford spends less than half the proportion of its profits to fund that dividend (31%) than does ExxonMobil (64%). So not only is Ford doing a better job of navigating an arguably tougher business environment than Exxon is -- it's also better positioned to grow its dividend, if it should so desire, when business improves.