Genesee & Wyoming (NYSE:GWR) continued its solid start to 2018 by delivering strong results in the second quarter, as rising carloads in North America helped drive revenue and earnings up by double digits, which was at the high end of its guidance range. The rail company anticipates that its solid performance will continue throughout the rest of 2018. Its turnaround plan in the U.K. is gaining steam, some temporary headwinds in North America should be going away soon, and customer demand is on the rise across the board. 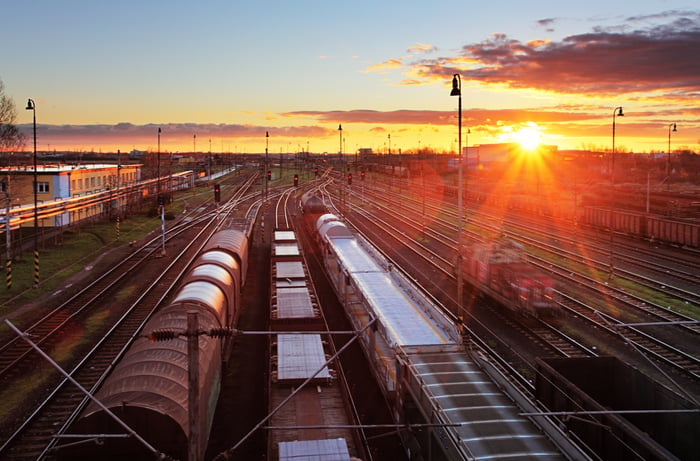 What happened with Genesee & Wyoming this quarter

North America was strong in the second quarter:

CEO Jack Hellmann commented on the company's results, stating that "our adjusted diluted EPS of $0.94 for the second quarter of 2018 were at the high end of our outlook, as business conditions continued to improve in each of our three geographies, led by North America."

As Hellmann pointed out, the company delivered strong results in North America, where same-railroad carloads increased by 8.1%. The biggest growth driver was coal and coke traffic, which contributed 40% of the increase in carloads during the quarter. Hellmann also noted in the earnings release that while operating income in the segment didn't follow revenue higher due to some temporary headwinds, the company anticipates that they will begin to fade in the back half of the year. Because of that, he said, "we expect to see our customarily strong operating leverage for the remainder of 2018 based on our current volume outlook."

That optimism led Hellmann to say that "our business outlook for the remainder of 2018 remains promising thanks to growing customer demand for rail shipments across most commodity groups, particularly in North America." Meanwhile, the company recently refinanced and improved the terms of its credit facility, and now has $600 million available. That gives it the financial flexibility to continue evaluating "investment opportunities in multiple markets, including the opportunistic purchase of our own shares."